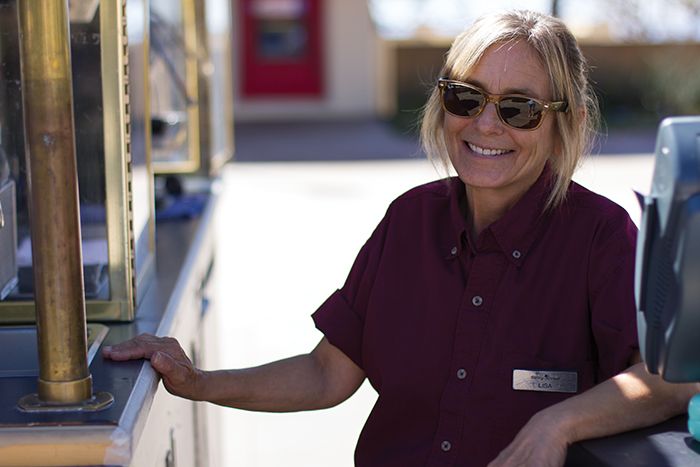 Standing at 4-feet-11 in her Beatles sweatshirt behind the coffee cart in Joslyn Plaza, Lisa Givner-Hatae takes an order, pours the foam of steamed milk on top of a latte, caps it and says, “Here you go, my dear,” with a smile.

Givner-Hatae is back to working the coffee cart after a year and a half of working up at the School of Law’s cafeteria.

“I’m always like, ‘Yeah, I’m going to work in the most beautiful location in the state,’” Givner-Hatae said. “How much nicer can it be to be away from all the noise?”

She spread her arms out to the ocean and laughed. The last woman who worked at the coffee cart left for maternity leave according to Givner-Hatae, and since no one was consistently running it, the cart was only open on occasion during first semester.

“I guess they were looking for someone reliable, and I’m a pretty reliable person,” Givner-Hatae said. “I mean, I have like 80 sick hours built up because I virtually never call in sick.”

Before working at the School of Law, Givner-Hatae worked at La Brea Bakery the first year it opened. But before that, she and her husband Akira Hatae co-ran their own full-service Japanese restaurant, Sushi Ko, for about 25 years in Bel Air before relocating it to Thousand Oaks.

“I basically ran the front of the house,” Givner-Hatae said. “My husband is from Japan and is a Japanese sushi chef, and I’m involved in Japanese culture and tradition and all of that.”

Givner-Hatae met her husband in college at Berkeley, where she studied pre-law. He came from Japan to study English, and they both worked at the same Japanese restaurant.

“I had to take a language in school, so I took Japanese because I would have a ton of tutors at the restaurant,” Givner-Hatae said. “Every night after work, he’d help me.”

After three years at Berkeley, Givner-Hatae dropped out and accompanied Akira to Japan as he learned to be a sushi chef. When she arrived in Japan, Givner-Hatae found picking up the language was more difficult than she expected.

“I thought, ‘Oh, I studied [Japanese]; I’ll be great,’” she said. “But as soon as we got there I was like, ‘Are you kidding me?’ I didn’t understand a word. It was horrible. And then little by little it started to flow.”

Through the years, Giver-Hatae has visited Japan with her husband and three kids (currently ages 16, 25 and 27) 15 times, and she is now nearly fluent in the language.

“Japan is beautiful,” she said. “I love it there. Everybody is really friendly. The first time I went, I stayed for a year and then we came back. We used to go every year for a couple of months because I wanted the kids to be immersed in the culture.”

In their home in Thousand Oaks, Givner-Hatae said they follow many Japanese traditions, such as eating Japanese food and not wearing shoes in the house. She says they also watch the Japanese news everyday and venture out to Japanese markets.

When they were owners of Sushi Ko, a staple of Japanese food in Bel Air for more than two decades, Givner-Hatae and her husband decided to move their restaurant to a location closer to home in Thousand Oaks. The restaurant suffered from the move, and after increasing debt and a lack of customers, Sushi Ko began to lose its prestige.

“It was just bad timing,” she said. “Lousy. Timing is everything with business. And with life basically.”

Givner-Hatae said one of the fun things that came out of the move was being featured on Chef Gordon Ramsay’s show, “Kitchen Nightmares.” The reality TV show specializes in renovating rundown, dysfunctional restaurants to get them back on their feet.

“My husband told me about it, so I filled out this little questionnaire online, and they called and said they were interested in featuring our restaurant,” she said. “So if you look on Netflix, you’ll see my former self. It was really fun. People still come up to me at the cart every so often and say, ‘Hey, I saw you on TV.’”

Unfortunately, the episode that aired in season two titled “Sushi Ko” was not enough to save the hurting restaurant.

“We were hoping it would be like a big, free commercial,” Givner-Hatae said. “They didn’t even air it until after we had already closed, because you have to film it, then edit, then it has to get into the lineup.”

In 2009, after years of service, Sushi Ko was forced to close its doors.

“That was kind of depressing,” she said. “We lost the restaurant, then we lost the house, then we got rid of a car. We spent a lot of money building the new restaurant, and lost it all. But that’s OK. We’re still healthy. I have a job, and I have benefits.”

Givner-Hatae said her husband had a difficult time when the restaurant closed after being king of the business for so long.

“He couldn’t find another job,” she said. “So he contacted some friends in Japan, and now he buys cosmetics here and ships them over there. He’s in a whole new world now. But it’s hard trying to get a job when we’re in our 50s, and he’s had his own business his whole life.”

After seeing the job opening at La Brea providing full benefits, Givner-Hatae began working at Pepperdine – her first job in a big company.

“It’s really different from anything I’ve ever done,” Givner-Hatae said. “When I started working at the School of Law up there, I was like, ‘See, my mother always wanted me to go to law school! I’m in law school every day!’”

She laughed, then caught her breath.

“I made that joke sometimes,” she said. “I guess if I did go to law school I wouldn’t be here, though. Or I’d be teaching here or something.”

Apart from a small array of decorative erasers from a Japanese market on her cash register, there are hardly any clues to tip people off to Givner-Hatae’s background.

But if someone asked, she’d tell her story. She’d make him or her a vanilla cappuccino, sit down with them on her break, and share all about Sushi Ko.

Or better yet, she’d have them watch the episode. 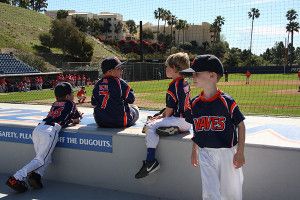 Photos by Sylvia Hartley Little League baseball is where almost every American ball player started and where they first...
Copyright 2013 Jupiter Premium Magazine Theme
Back to top