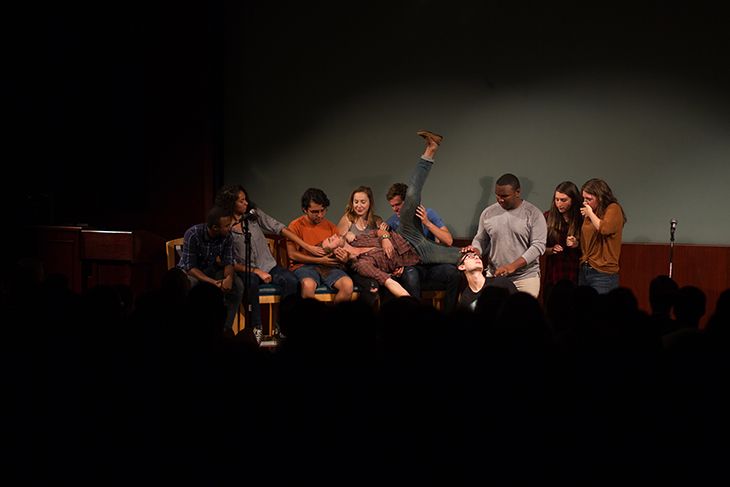 Pepperdine’s Improv Troupe (colloquially known as PIT) started off its new season with a bang Friday night. The group of students performed for a full house in Elkins, and the energy that the crowd brought translated to a very strong show. Improv is hit-or-miss by nature, so the evening’s success is a huge credit to the performers.

PIT has been a Pepperdine tradition for years, and once a month the cast puts on a two-hour show in that consisting of multiple improvisational games. The audience is as much a part of the show as the cast members, as they are the ones who provide the prompts that make the games possible. PIT is hosted by Brian Jones, and its cast members are Stasia Demick, who is sports editor for the Graphic, Joel Foster, Tara Jenkins, who is a staff writer for the Graphic, Alex Garrett, Amoni Henderson, Jalon Matthews, Caitlin O’Grady, Sean Conrad, Zach Coffman, Fernando Grimaldo, Sam Gonzales, who is a copy editor for the Graphic, Evatt Salinger, Sarah Barney and Callaghan McDonough.

This show started off with a delightfully over-the-top “Scenes from a Movie,” in which members of the cast act out a style of movie based on prompts from the audience. The prompts were “horror” and “soybeans”; the skit — about cheerleaders going to an abandoned cabin in the woods with a potentially dangerous package of soy ­— was golden. The rest of the show consisted of a variety of hilarious sketches, from a character getting dialogue by reading texts from an audience member’s cellphone, to the cast acting out the first date of one of the troupe member’s parents.

The show was consistently funny from beginning to end — even the games that didn’t fully come together still elicited plenty of laughs. This cast seemed very comfortable with each other, and each was able to play off each other in a smooth, organic way that eliminated the awkward pauses or stumbles so common in the world of improvisation. It was a breath of fresh air to watch a cast that knew what they were doing.

If there was one cast member who deserves special recognition, it would be Jalon Matthews, who was the high point in almost every sketch in which he performed. Matthew’s absurdist style and full-on commitment to any role that came his way made for a slew of memorable moments, including some spot-on Miley Cyrus dance moves that redeemed an otherwise unexceptional “Emo Date” game.

Improv comedy is exceedingly difficult, and even the best attempts sometimes do not translate to audience amusement. If you come to PIT expecting the well-oiled machine of “Whose Line Is It Anyway,” you may leave a little disappointed. But considering that these are college students who are putting on a two-hour improv show in their spare time, their performance was impressive. PIT has its ups and downs, but a strong opening show is a great sign. Let’s hope that the cast can make the rest of the season just as successful. 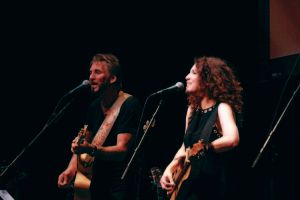 Photos by Julia Naman"Don't even count us in," Kenny Loggins said to his bandmates. "Just do it."Loggins, Georgia Middleman...
Copyright 2018 Pepperdine Graphic
Back to top