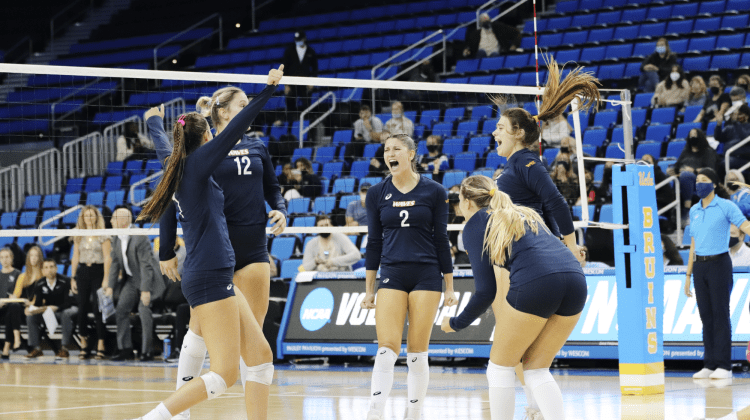 The Women’s Volleyball team celebrates victory in set 3 over UCF on Dec. 3 at Pauley Pavilion. The Waves dropped the first-round match 1-3.

No. 25 Pepperdine Women’s Volleyball said goodbye to five seniors after the University of Central Florida defeated the Waves 3-1 in the first round of the NCAA Division-I Tournament on Dec. 3 at the No. 14 UCLA’s Pauley Pavilion.

The Waves entered the bottom left quadrant of the tournament unseeded with a 22-5 overall record, a 14-4 West Coast Conference record and coming off a four-game win streak.

After a slow start led to a 25-19 loss in the first set, the Waves gained momentum to come within set point in the second at 25-23. The Waves narrowly overcame the Knights in set three 26-24 but ultimately fell in the fourth and final set 25-22.

Despite the defeat, Pepperdine had 58 kills — 29 of them coming from senior outside hitter Rachel Ahrens — compared to UCF’s 56. The Knights out-blocked the Waves 10 to 4, along with the Waves garnering 71 digs to 63, 34 courtesy of senior libero Madison Shields.

Creative Director Ali Levens captured this event and the emotions of the Waves’ 25th berth into the NCAA tournament following a second-round appearance last season.

The Waves cheer during the starting lineup announcement. UCLA hosted two first-round matches and one second-round match of the NCAA tournament at Pauley Pavilion.

Senior middle blocker Rosie Ballo (No. 9) and sophomore opposite Emma Ammerman (No. 11) coordinate for a double-block against UCF senior outside hitter McKenna Melville. Ballo had one block in the match.

Ammerman and junior defensive specialist Aubrey Roberts launch into the air for a chest-bump after a Waves point in the first set. Pepperdine initially led the set but quickly started to trail UCF.

Junior setter Isabel Zelaya arches for a back-set to the opposite hitter during the first set against UCF. Zelaya clocked 46 sets during Friday’s match, outnumbering UCF’s setter by two.

Senior outside hitter Rachel Ahrens (No. 18) and sophomore middle Meg Brown (No. 12) extend for a double-block versus UCF’s fifth-year opposite Annie-Marie Watson in set two. In addition to her 29 kills, Ahrens garnered one block.

Coaches Scott Wong, Tara Hittle and Steve Astor deliberate during a UCF timeout during set three. This was Wong’s seventh season as head coach of the Waves.

Brown soars over the net and UCF’s redshirt senior middle Nerissa Moravec to finalize the Waves’ win in the third set. Brown accumulated nine kills over the match and had the highest hitting percentage of the team at .412. 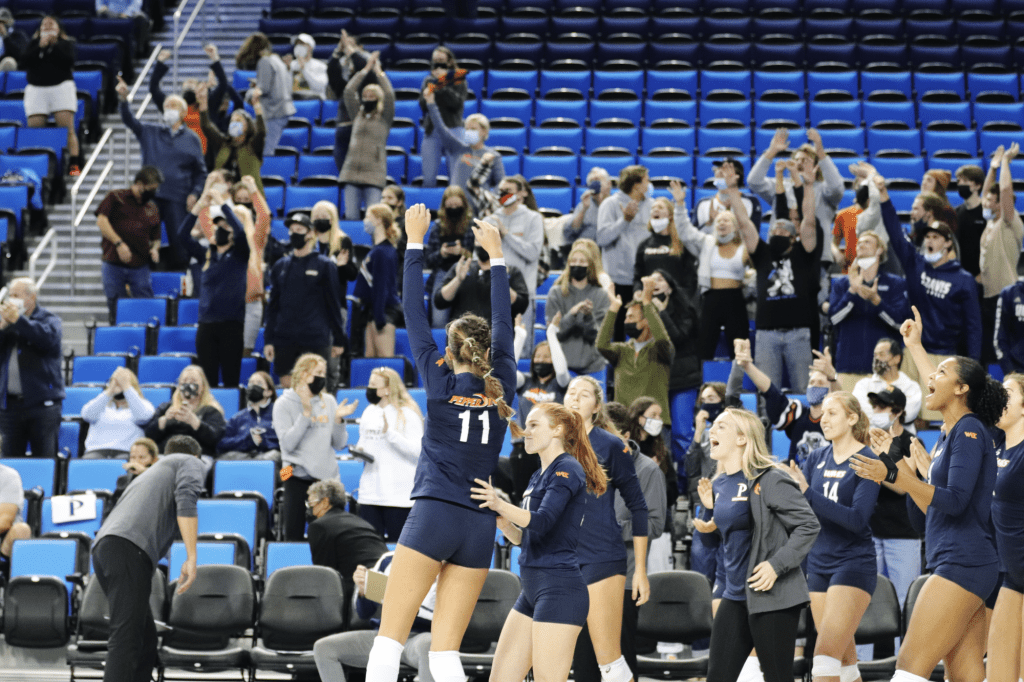 The Waves bench and crowd cheer after Brown’s kill solidified their third-set win. The Waves led for the majority of set three.

Ahrens flies into the air over a double-block to start off set four against UCF. Ahrens hit on a .383 clip in her final match as a senior.

Freshman outside hitter Grace Chillingworth aims around the block for a spike against two UCF hitters. Chillingworth had six kills on the day.

Senior libero Madison Shields lunges for a pancake to save the live ball during set four. Shields had 37 of the Waves’ 71 digs against UCF.

Pepperdine waves goodbye to UCF after a heartbreaking, four-set loss at Pauley Pavilion. The team will say goodbye to five seniors.