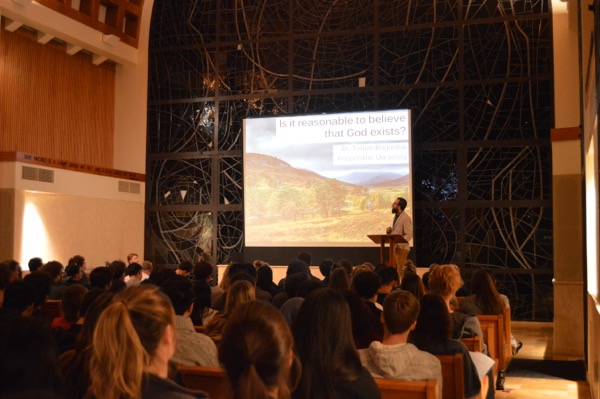 Two philosophy professors held a civil debate hosted by the philosophy program regarding whether it is reasonable or not to believe God exists in front of a crowded Stauffer Chapel on Nov. 17, inviting Pepperdine students to attend for convocation credit.

Pepperdine’s Professor Tomás Bogardus argued that it’s reasonable to believe in God’s existence, where University of Colorado Boulder’s Professor Andrew Chapman argued that there is no reason to believe that God exists — not that He does not exist.

The two men debated over the rationality behind believing in God, not whether or not He exists. They supported their claims with theories and formal thought process, not using things such as the Bible or relics as evidence.

“One thing I liked was how the two men had very different viewpoints, but they were able to discuss it in like a civil way,” freshman Kelsey Harmon said. “It wasn’t a heated argument. It was interesting to see how they could do that.”

Bogardus focused on the flaws behind naturalism, a theory discussing how everything in the world is physical, to support his claim. He said naturalism fails to describe various phenomena and instead creates more mystery surrounding these phenomena rather than explain them, which supports theism, or faith in God.

Chapman took an agnostic approach, refusing to say God does or does not exist. His argument was based on the fact that if God does exist, He would be supernatural and therefore be unable to interact in our world.

The debate was a formal discussion following a structured format, with each professor giving an opening statement first and then responding to their opponent after hearing their statement. The men used graphics and notes on a projected slideshow to help students understand their separate arguments.

“They disagreed in an intellectual and discussion-based manner,” freshman Hadley Hilgenhurst said. “I think it’s good that they did it because not everyone who goes here is Christian. It draws more attention to it and fosters more thinking about it.”

Harmon said the debate was difficult to understand at times because of its fast pace and challenging vocabulary.

“I was always a little bit behind,” Harmon said. “I was kind of frustrated by that because I wish I could’ve kept up better than I did.”

Some students said the debate helped solidify their faith even more.

“It made me be proud of what I believe in,” freshman Melissa Labnow said. “I agree with both sides and I see how there’s two different arguments. I think, with my beliefs, I can be a part of both.”

After the professors went back and forth, they had a Q&A session with audience members.