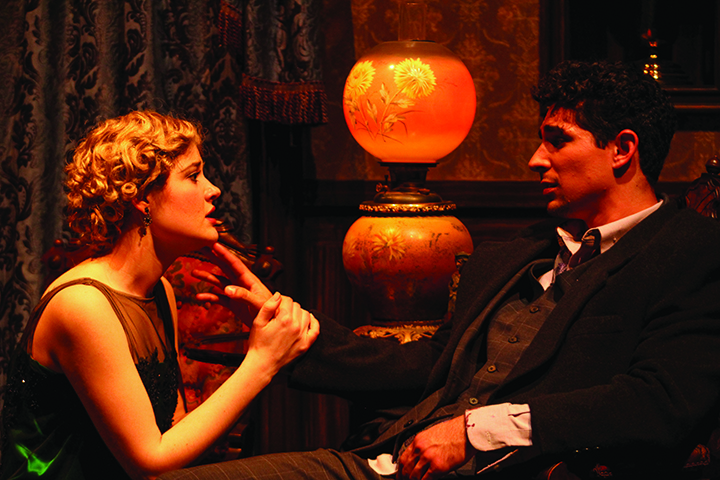 Pepperdine’s Theatre Department kicked off the 2018 spring semester with a production of the dark, Victorian-era drama “Hedda Gabler,” written by Henrik Ibsen and directed by Pepperdine Professor Scott Allen Smith.

The show premiered at the Lindhurst Theatre on Jan. 23 and ran to Jan. 27. Itsstory details the inner turmoil and struggles of the newlywed Hedda Gabler, played by junior Theatre major Christine Galyean. Gabler copes with dissatisfaction for her partner Jorgen Tesman, played by senior Parker Johnson, who is referred to by the other characters as a “simple soul”.

The play captures Gabler as her life is thrown into disarray by her former lover and Tesman’s academic rival, Ejlert Lovborg, played by senior Chris Bozzini, when he comes back into her life. The main source of conflict from the play comes from Gabler trying to cope with her jealousy for Lovborg’s new best-selling work and his companionship with Thea Elvsted, played by senior Mallory Erwin, who supports him while writing it.

Gabler’s on-stage antics include brandishing her pistols in front of guests, openly insulting her aunt’s personal fashion and threatening to set Elvsted’s hair on fire. Johnson doesn’t think her cruelty is understated in the play. “The character of Hedda is compelling for audiences because of how ridiculously wicked she can be. People just can’t quite understand her motives. But many find humane moments in her throughout the play,” Johnson wrote in an email.

In such a complex role, Galyean wrote that she tried to look deeper than the outward craziness that Hedda is infamous for. “I took my focus from her erratic behavior and tried to ground it in the reality of her situation. I don’t think Hedda wanted to be mean and crude, but in a world where…men have suppressed her, she learned that it’s the only way you can survive and come out on top. She just wants to live freely, on her own terms,” Galyean wrote in an email.

Galyean’s performance of Gabler is punctuated with outbursts of rage for her economic state, marriage to Tesman and the lost relationship with Lovborg. As Gabler copes with the disparity between her expectations and the reality she faces, the audience witnesses a tragic unfolding of events

In an excerpt from the play’s program, Smith wrote about the perplexing nature of her character, and said the reason for the play’s sustained popularity since its first performance in 1891 may lie in the fact that “you just can’t figureHedda out.”

“Hedda Gabler stands as one of the most fascinating figures in modern drama,” Smith wrote “[She] commands the center of Henrik Ibsen’s strikingly contemporary investigation of power.”

Johnson wrote that various elements allow the audience to fully immerse themselves in the story. “The plot itself is pretty scandalous. It makes audiences feel like they are looking through a window of an actual family home … with the combination of costumes, lighting, sound and characters, this truly made the story feel like it was actually happening in front of the audience,”Johnson wrote.

Smith wrote that although the play is 128 years old, the raw display of human nature makes it relatable to Pepperdine students today.

Theatre-goers can look forward to the rest of Pepperdine’s spring productions: “The Pirates of Penzance” (Feb. 21 to Feb. 24) and “Medea” ( April 4 to April 7). Tickets are $10 for students and $20 at regular price. They can be purchased online or at the box office at Smothers Theatre.