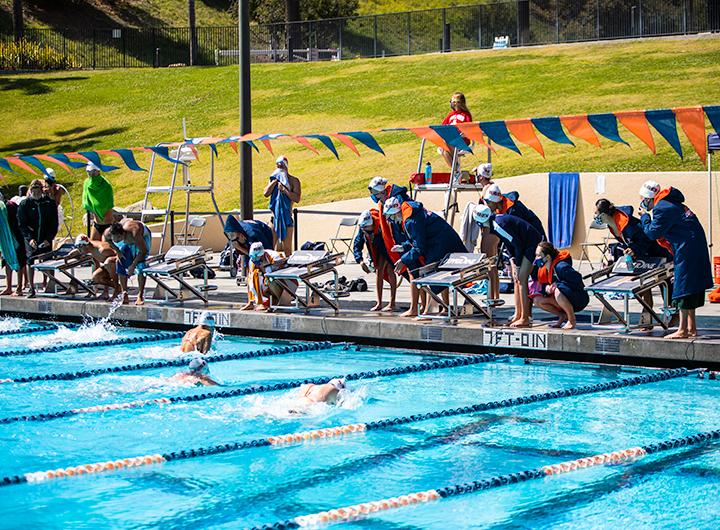 The Swim and Dive team cheer on their 400-yard breaststroke teammates during the Waves’ matchup against Biola in Raleigh Runnels Pool on Saturday, March 13. Although the Waves put up a fight, they were defeated by the Eagles 105-100, dropping their record to 4-4. Photos by Ryan Brinkman

Pepperdine’s Swim and Dive team competed against Biola and Azusa Pacific on Friday, March 12, and then lost on Saturday to Biola in a dual meet at Raleigh Runnels Memorial Pool.

The diving team competed Friday, the first time the divers have done so in nearly two months. They were led still by junior Paulina Holmberg, who placed third in the 1-meter and 3-meter dive.

Diving Coach Kaedan Cogbill said the dive team is young and is gaining experience headed into the Pacific Collegiate Swim and Dive Championships.

On Saturday, the women’s swim team lost a close meet to Biola 105-100. The teams were tied heading into the final event, the 400-free relay, but Biola won that event by three seconds which ended up giving them the win. The Waves’ record dropped to 4-4 with the loss.

Despite the loss, Head Coach Ellie Monobe said everyone competed well and is excited to finish off the regular season.

“We had a very good meet and it has been a little over a month since our last competition so some of the girls were just getting back into the swing of things,” Monobe said. “I think it is important for us to take advantage of each racing opportunity so treating every race like it is our last has been an emphasis for us this year.”

Monobe said the standouts included junior Audrey Camarillo, who joined the team this fall and swam 54 seconds in the 100-yard freestyle for the first time.

“I really surprised myself in the 100-yard freestyle despite the 50-yard freestyle not going great,” Camarillo said. “I think we have been working hard on keeping our tempo up, and I have not competed much this year so it was great to see the improvement.”

“We have been training hard and so it is just putting all the training and translating it to races,” Slater said. “I had to learn to get in the right mindset again and being confident, but it all came together well.”

The meet was back and forth, as there were five lead changes throughout the 22 events. One of the biggest races came from freshman Tay Thomas, who won the 100-yard butterfly, adding to Pepperdine’s momentum.

“The biggest thing that helps me stay focused is staying calm before the race, because in the past I have gotten over excited,” Thomas said. “Now, I just try to shut my brain off and let my body do the work that I have been doing in practice, and I wanted to do well for my team.”

Monobe said despite the loss in the 400-free relays, it was a great day for junior transfer Mckenzie Kelly, who had been battling chronic injuries during the season.

“Mckenzie just joined us and she has been working really hard through her injuries,” Monobe said. “It was great to see her pop off some fast times before we head to conferences.”

The Waves will have one more meet against Azusa Pacific and LMU on March 20. After that, the Waves will gear up for the PCSC Championships on April 14.

“This is our last rehearsal before the championship and we are hoping to get better seed times,” Monobe said. “Our next race is our last home meet for our seniors, and we want to give them a good send off for their last race at Raleigh Runnels.”

Camarillo said the team is going to prepare well mentally and physically these next few weeks in anticipation of the championships.

“We will still be working hard for the next few weeks and then we will begin to rest towards the week of conference,” Camarillo said. “I think focusing on getting good sleep, eating well and getting excited for the end of the season will be awesome.”

Despite the unusual season, the team will prepare as they normally do for the championships.

“In a typical season, we usually take a break midway from racing, but we have not really had that chance this season due to COVID-19,” Slater said. “I am excited to finally hit our taper and get good rest for our bodies so that we can perform the best at the end of the season.”