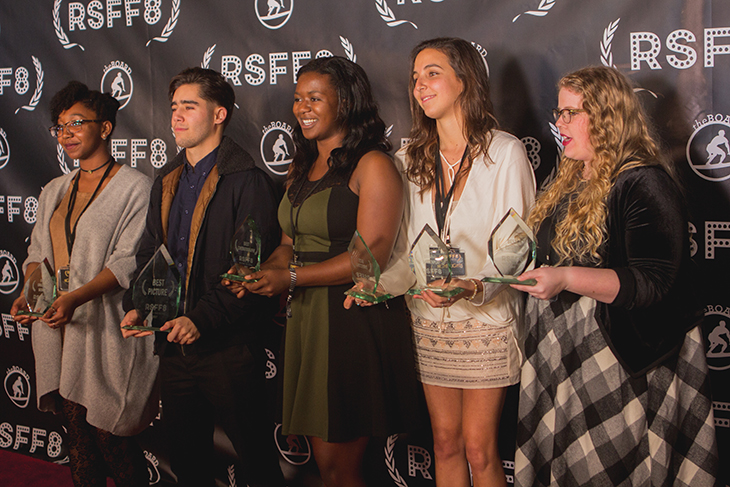 Pepperdine was recently recognized as a “film school on the rise” by The Hollywood Reporter.

Yet, despite The Hollywood Reporter’s characterization of Pepperdine, Sarah Stone Watt, dean of the Communication Division, said Pepperdine does not consider itself a film school.

“We certainly have a lot going on in [film], but we have never really called ourselves a film school like, say AFI (American Film Institute) would call themselves a film school. We have always been under the umbrella of this broader Liberal Arts education,” Stone Watt said. “So there is an energy for film here but also all forms of media, really.”

Stone Watt said Huth and Caruso then took what they learned in these television-focused programs and translated their skills into their media forms of choice.

“One of the things I think Pepperdine is working on right now is how useful are these labels: TV, Film, those sorts of things, and how do we put together an excellent educational program that lets our students keep thriving in the broader media industries,” Stone Watt said.

An example of Pepperdine’s efforts to promote student success in media and related industries is the work done by the Institute for Entertainment, Media, and Culture (IEMC).

John Mooney, executive director of the Pepperdine University Institute for Entertainment, Media, and Culture, said the Institute was launched in October 2015. “It was created as a specific recommendation from a task force that was chaired by the current provost to consider what more Pepperdine could and should do to better serve students at Pepperdine who aspire to careers in entertainment and media,” Mooney said.

Mooney said the IEMC was created as an interdisciplinary institute that sits between Seaver College, the Graziadio School of Business and Management and the Pepperdine School of Law.

“The Institute is structured such that we have academic directors from each of the main schools and within Seaver College from the two main divisions that are educating students for the entertainment and media industries,” Mooney said. Professors Theresa de los Santos, Craig Detweiler, Joi Carr, Nelson Granados, and Victoria Schwartz serve as academic directors, representing a wide range of divisions and each of the three Pepperdine campuses in Malibu,” Mooney said.

Mooney said this core team is constantly looking for opportunities to innovate curriculum and augment classroom learning experiences by organizing events such as speaker series’ and study tours.

“We are trying to build better relationships with key alumni in different sectors in entertainment and media and cultivate research and scholarship that will lead to improving a broad understanding of the entertainment media sector in L.A. and figure out how to best position students to be successful in that area,” Mooney said.

Mooney said the IEMC works with different divisions and Schools at Pepperdine to ensure students are equipped to thrive in industries as dynamic as entertainment and media.

Mooney said this strategy entails working with the Business division at Seaver College and the Graziadio School of Business and Management to innovate curriculum to better serve students with an interest in entertainment and media business. A similar process occurs between the IEMC and the Pepperdine School of Law, Mooney said.

Mooney said some of the work the Institute for Entertainment, Media, and Culture does is raise awareness about the work already being done by Pepperdine students and alumni in their respective industries.

“I think that something the Institute has done is elevate the level of awareness among the people who are writing about film and TV programs and include them in these rankings,” Mooney said.

“Film studies professors like Joi Carr, Steve Parmelee, and especially [Leslie] Kreiner-Wilson have been working on this along with Communication professors like Don Shores for over a decade, revising the curriculum and enhancing students’ learning experiences,” Detweiler said.

Detweiler said he has been a professor at Pepperdine for nine years and has seen his students achieve success in the entertainment industry even before they graduated. Two students in Detweiler’s Documentary Filmmaking: Theory and Practice class (MPRD 560), David Hutchinson and Moises Barba, have been recognized or nominated for the BAFTA student award, Detweiler said.

“I think the key is raising our level of expectation, making it clear just how competitive this industry is and how remarkable and polished your stories need to be. It’s raising the bar of excellence earlier and higher,” Detweiler said.

“We have students who are creating gorgeous films that are going to the international film festivals. We have students [like Haidyn Harvey] who have both shown at and interned at Cannes,” Stone Watt said. “We have students that are making amazing documentaries and getting them into all sorts of festivals and then we have our own festival, Reel Stories.”

Detweiler said students’ success is also seen in the work they do after graduating.

Senior Moises Barba said he is a Film Studies major with an emphasis on Production and takes business courses to supplement his degree.

“Pepperdine has provided me with a really good environment to dive into what I’m passionate about. My documentary that screened at Reel Stories, “Desarraigado,” started in the documentary film making class that I had here as a freshman and I think that’s a good example of my growth throughout the years,” Barba said.

Barba said passion is important in success in filmmaking.

“You can love the medium of film but when you can find the crossroads between that medium and something that you really love, that’s when you really grow,” Barba said.

Barba said he enjoys pursuing film projects dealing with subjects that are personal to him. “I don’t want to just make a film to get it into festivals just for the sake of doing it. I want it to be a story that matters, a story that will have an impact on viewers. For me right now, the documentary realm is somewhere I fit well and I’m comfortable with,” Barba said.

In addition to course offerings and opportunities such as the Reel Stories film festival, Barba said Pepperdine’s study abroad program has helped him develop as a filmmaker.

“The mode of storytelling in different places is different. Therefore, you are broadening your understanding of what it means to tell a story by going abroad,” Barba said.

Another resource that Barba said has been helpful is the University Innovation Fellows (UIF) program, a program that Barba and other undergraduate and graduate students are running.

He said UIF is in the process of creating a series of sessions with industry professionals who will elaborate on filmmaking topics that students would like to learn more about in an in-depth way.

“If you want it bad enough, the people here will help you make it happen,” Barba said.