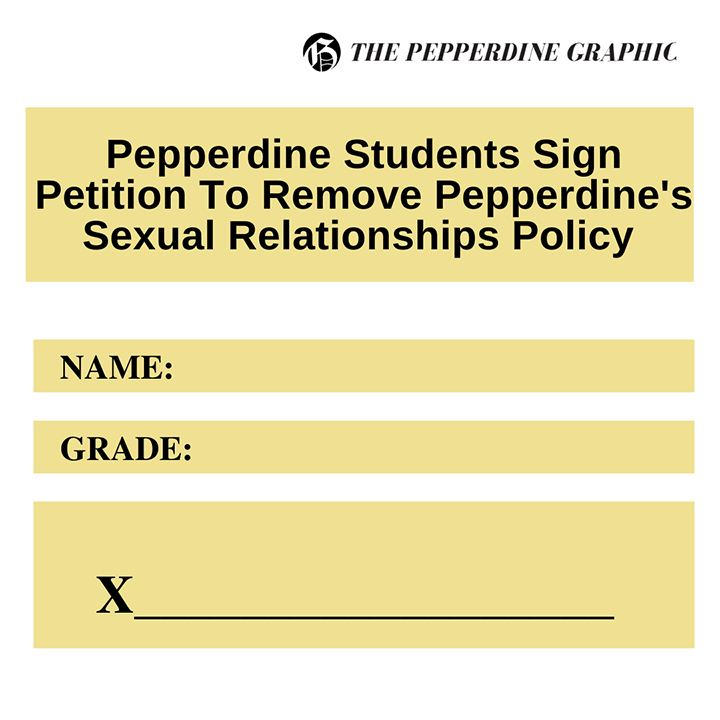 A student-circulated petition hopes to address the second clause of the Seaver College Sexual Relationships Policy in the Student Code of Conduct and ask for its removal on the grounds of discrimination and inconsistency. As of May 13, the petition has 281 signatures.

The second clause of the Sexual Relationships Policy states, “Pepperdine University affirms that sexual relationships are designed by God to be expressed solely within a marriage between husband and wife.” The creator of the petition, sophomore Coby Rogers, wrote in the petition the policy creates a discriminatory environment and is contrary to the Christian mission of Pepperdine.

“Part of my argument was simply that statement is in itself a form of discrimination, because it’s in the Code of Conduct,” Rogers said. “I don’t see any other policies in the code of conduct that address, groups of people that say, ‘You’re not like us so you’re wrong,’ except for this one.”

How the Petition Began

The petition originated, Rogers said, when he wrote a persuasive speech for his COM 180 class. The action step was a QR code with a link to the petition that he shared with the class.

Rogers said he thought about the arguments to remove the petition for some time — one of which was the inconsistency with the anti-discrimination statement at Pepperdine and the statement affirming the dignity of the human person.

“Having that policy in there doesn’t celebrate the dignity of every person, because it takes the dignity away from any queer students, any queer faculty, anyone who is of a sexual or gender minority or gender non-conforming, that is in the Pepperdine community,” Rogers said.

Focusing on the lack of consistency between the rest of the Code of Conduct and the second clause of the Sexual Relationships Policy, Rogers said, hopefully, will gain him a better response than arguing opinions with the University.

“The easiest way to incite change and to look at this in a new form and fashion is through policy,” Rogers said.

His goal is to create an avenue for conversation with the University and encourage the administration to hear what is behind the argument, Rogers said.

“I came at it from that direction, because it seemed to be the best way to communicate,” Rogers said. “Even though we have these differences there is a similarity that we’re examining this policy through.”

To spread the word, Rogers said he sent the petition to the @queeratpepp Instagram and shared it with peers in the theater department.

Rogers said he has not decided how long the petition will be live and does not have plans to share it with administration.

History of Petition at Pepperdine

Psychology Professor Steve Rouse, faculty adviser for Crossroads Gender and Sexuality Alliance, said he has seen student activism in other areas of the Student Code of Conduct.

Buffaloe said it is exciting to see students outside of Crossroads bringing attention to the clause and showing support.

“I really want to see those who have the positions of privilege in our campus to kind of stick their necks out for us, I guess, because they don’t often,” Buffaloe said. “And I think that it’s better when we’re a unified community and so if those in our community have more power who have more privilege if they can stand up for those of us who don’t.”

Relationship Between Administration and Students

Rouse said the presence of this clause in the Code of Conduct can make students fear punishment from the University and wary of having conversations with faculty about sexual relationships and how it relates to their worldview.

“There are a lot of women on campus who I’ve known who’ve experienced sexual harassment or abuse and haven’t come forward to talk about it because they’re worried they’ll be punished for having sex in the first place,” Johnson said.

In contrast, the Sexual Relationships Policy at Pepperdine’s Caruso School Of Law, Rouse said, shows respect for the student while maintaining the connection to the Christian mission.

The policy states, “out of concern for the health and safety of members of the university community, and to uphold the moral character of the educational environment, students are expected to make decisions regarding their sexual relationships consistent with the University’s Christian philosophy,” and includes a statement against discrimination.

Seaver College’s statement, Rouse said, seems inconsistent with the standards of the Supreme Court after the decision of Obergefell v. Hodges, which legalized and requires states to recognize same-sex marriage.

“It is very possible that we could someday have a Seaver student whose legal marriage does not fit this expectation of a husband and a wife, and this statement as it currently stands, seems to me that it would either then lead toward discriminatory treatment of that student, or the University would have to just pretend that this statement didn’t exist,” Rouse said.

Rogers said when he shared the petition with his class, he did not anticipate the number of classmates who would sign.

“It’s kind of been an unexpected support behind it so that’s been kind of exciting,” Rogers said.

First-year Makayla Harris said she had no idea Seaver’s Sexual Relationships Policy existed until she saw the petition on her friend’s Instagram story. Harris said it makes her sad to think about the effect this policy could have on LGBTQ+ students.

“I understand that Pepperdine wants to hold on to its Christian values. And I think that’s good and I’m not asking Pepperdine to let those values go,” Harris said. “If anything I think Pepperdine should incorporate them more by adding more love and more acceptance and the Christ-like love that everyone talks about.”

Johnson said she has experienced people within the Pepperdine community making comments that create an uncomfortable environment for LGBTQ+ students.

First-year Anastasia Condolon, photo editor for Currents magazine, said she also became aware of the petition when she saw the link on her friends’ social media feeds.

“I think that the Pepperdine sexual relationship statement does encourage a discriminatory atmosphere —which the petition to change the policy expresses — and I fully believe that it is time that Pepperdine’s policy changes,” Condolon said.

Condolon said hearing of her LGBTQ+ friend’s experiences with microaggressions and statements on the Freedom Wall in November 2019 also inspired her to sign.

“It makes me feel like that’s even more of a reason that this policy needs to change — in order to stop further discrimination from happening on campus,” Condolon said.

Buffaloe said keeping the clause in the Student Handbook prevents LGBTQ+ students from feeling like they belong at Pepperdine. As a result of this clause, students do not feel like they are supported by the University, which affects their college experience Buffaloe said.

“Of course Pepperdine is a Christian organization,” Buffaloe said. “It’s a Christian university, and I think that by perpetuating this rule, and keeping it around they’re keeping up this idea that the church is inherently excluding place, and that the church doesn’t have love for everyone, which, I’m not religious, but at least that’s not what I understand from those of my friends who are truly religious.”

Rogers said he hopes the response to the petition is an atmosphere where the Pepperdine community listens to and acknowledges LGBTQ+ students.

“There are real people, there are queer students and their queer faculty who are being discriminated against,” Rogers said. “And that’s the much bigger issue especially in a spiritual community that claims to be full of support and full of divine love for each other.”

When Condolon walks around Pepperdine she said sees signs posted telling students they belong at Pepperdine and removing this clause will help LGBTQ+ students feel more of a sense of belonging within the University.

“I really do love the community at Pepperdine and I’m so grateful to be here, but as I say at the top like I’d be remiss if I didn’t acknowledge that there is room for improvement,” Condolon said. “And I see an opportunity for Pepperdine to improve by changing this statement.”

Even if students are not part of the LGBTQ+ community, Harris said she hopes they will see how the Sexual Relationships Policy is hurting students and the Pepperdine community.

Johnson said she hopes this petition will encourage students to think about the effect their words have on members of the LGBTQ+ community.

“There are a lot of people who justify that by saying, ‘Well, I respect and love gay people but I still think it’s a sin,'” Johnson said. “But to think that somebody is sinful, for something that they cannot change or some way that they innately are is in itself, homophobic or not tolerant.”

As this petition gains the attention of more people at Pepperdine, Buffaloe said she hopes faculty show their support and acknowledge the emotional stress the clause puts on LGBTQ+ students.

“I want that clause out,” Buffaloe said. “I want it gone and I never want to see it again. It’s rude, I guess I keep coming back to that, but it’s just so annoying to look at it and to see it; it just makes you feel so awful, as a queer person, because it’s just like, ‘Oh I don’t exist, technically, at my school.’”