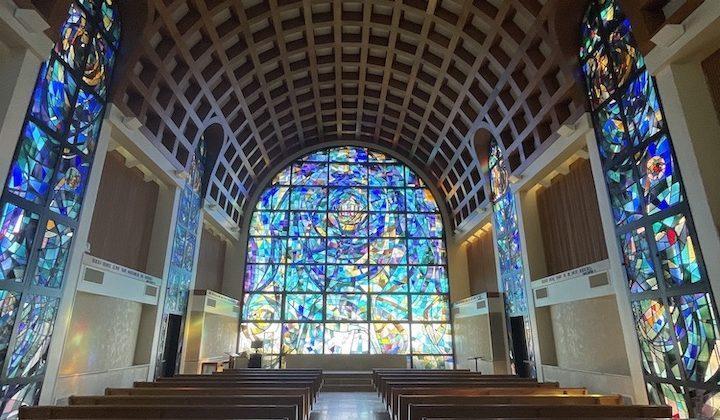 Afternoon light beams through the large stained glass windows inside Stauffer Chapel on the Malibu campus in fall of 2021. The chapel serves as a cornerstone for Pepperdine’s religious affiliation, which helps market the religious nature of the University to prospective students. Photo by Audrey Geib

Crossways. Won by One. Next Gen Preacher Search. Youth conferences.

All of these are ways Pepperdine strives to recruit and encourage Church of Christ students to attend the University.

George Pepperdine drew from his religious beliefs in the denomination when he founded the University in 1937. Since then, Pepperdine has grown its outreach and student population while upholding the founder’s vision for a place where students can grow in their faith and receive an education.

“George Pepperdine was a great example of a caring and philanthropic guy,” said Jeff Walling, director of the Youth Leadership Initiative. “We continue to honor his faith connection in our school now.”

Many schools founded with a strong religious affiliation have since lost that identifying factor. Harvard, Yale, Dartmouth and Southern Methodist University are all colleges that once had a clear religious foundation. As these schools broke off from their founding denominations, they gradually lost most of their religiosity altogether, at least outside their seminaries, Pepperdine Chancellor Sara Young Jackson said.

Pepperdine’s Board of Regents researched what helps schools founded on religious beliefs maintain that identity throughout generations, Jackson said. The Board of Regents believes maintaining ties to the founding church is critical to the religious mission. This idea manifests in the University’s active recruitment of Church of Christ students.

The Churches of Christ developed out of early 19th-century religious revivals in the United States, known as the Second Great Awakening. Early founders Barton Stone, Thomas and Alexander Campbell all desired to be Christians only, following the Bible and its specific teachings. They hoped to restore the New Testament vision of the church in the Book of Acts, according to Encyclopedia Britannica.

Why Pepperdine Struggles to Find Church of Christ Applicants

Declining church attendance nationally and declining birth rates in rural Church of Christ strongholds are two reasons for the decrease in Church of Christ membership nationwide, but scholars also point to increasing numbers of U.S. citizens who are atheist, agnostic or reject organized religious affiliation. One-fifth of Americans today do not identify with any religious affiliation, according to the Christian Chronicle.

“The churches are smaller, which means that the pool of students we are pulling from is smaller,” Walling said.

Until this fall, Pepperdine held steady with roughly 12% of students identifying Church of Christ-affiliated students, according to the fall enrollment census.

“We definitely see the impact of the decrease in membership in the Churches of Christ across the country,” Jackson said.

Walling’s Youth Leadership Initiative uses a variety of programs to reach out to a dwindling pool of Church of Christ students, despite the gradual nationwide decline.

Junior CJ Davenport said he rarely sees other Church of Christ students, though they make up 8% of the student population.

“Whenever I discover a student is Church of Christ, I think, ‘Holy cow,’” Davenport said.

There are at least 17 undergraduate colleges affiliated with the Churches of Christ, according to Best Accredited Colleges.

For many students, finding a school that values both a faith-based community and a community of academic excellence is not an easy task.

Senior Blake Farley said he sought a place where he could achieve academic excellence while staying plugged into his religious beliefs when applying for college.

“I was looking for a faith-based community, and I found that through Pepperdine,” Farley said.

But Pepperdine is also No. 47 out of the top 100 most expensive colleges in the United States, according to CollegeCalc. Its also in the most-expensive location, as most of the other Church of Christ schools are in the Midwest and South.

Pepperdine Legacy Partners raises money to provide Church of Christ students with scholarships. The group has raised over $4 million in scholarship since its foundation in 1958.

Although the team works diligently to provide financial assistance, it only makes a small dent in the overall tuition for each individual student, Walling said. The Helen Young Scholarship awards $5,000 toward tuition.

Despite the Christian affiliation of the University and its connection to the Churches of Christ, being a church member does not guarantee a students’ admission, Walling said. Each application is thoroughly assessed to ensure that each student can meet the rigorous academic demands.

Fighting a Decreasing Pool with a Wider Net

Due to the declining number of Church of Christ students, Walling and other University officials work to create and maintain opportunities for students to plug into the community before coming to Pepperdine and during their time as students. The biggest outreach is the University Church of Christ, Walling said.

Walling runs the Youth Leadership Initiative, a team of individuals who work to raise up the next generations of Christian leaders through various programs like Crossways and the Next Gen Preacher Search.

Crossways is a nine-day camp that hosts high school students the summer after their sophomore or junior year. Pepperdine hosts 100 students, 75% of them are part of the Churches of Christ.

During the week, students focus on how God has uniquely gifted each of them to bless the world, Walling said. Students learn from guest speakers, professors and current students.

To encourage these students to apply to Pepperdine, the University waives the application fee. Each first-year class typically sees 20-30 graduates of Crossways commit to Pepperdine, Walling said.

Davenport participated in the Crossways program after his junior year of high school. Crossways introduced him to the Church of Christ community at Pepperdine.

“Before I went to the camp, I didn’t even consider going to Pepperdine,” Davenport said.

Davenport is from Carrollton, Ga., a town that sits on the opposite coast of the country from the Malibu campus. It was the tight-knit community that attracted Davenport to Pepperdine, he said.

The Next Gen Preacher search serves Christian students who want to pursue a future in preaching, public speaking or teaching. Students submit five-minute videos of them giving a speech.

Walling and his team select 25 students to participate in a two-day program on the Malibu campus, where they receive coaching from guest speakers and preachers. The finalists later speak with Walling at Christian conventions across the country.

Another program that brings in Church of Christ students is Won by One. This is a six-person student-led a cappella group that travels the country in the summer. They perform at various churches and conferences to deepen Pepperdine’s connection with the Churches of Christ and to introduce students to the University through music and fellowship.

The Church of Christ denomination traditionally does not use instruments in worship. Therefore, Won by One only uses their voices in performances. The group records worship albums of their greatest hits. The most recent volume includes songs from 2006-16 and can be ordered on the Won by One website or downloaded through Apple Music.

To motivate students to join the group, each member on the Won by One team receives a $20,000 scholarship, and Pepperdine covers their room and board fees, Walling said.

Alumna Rachael Higgins (’21) was a part of Won by One all four years of her college career and now works with the Youth Leadership Initiative managing the group.

Being a member of the Won by One team is a big undertaking, Higgins said. The team practices weekly and travels during the summers for anywhere from six to eight weeks.

“It can be psychically draining when you’re traveling, going from place to place and mentally as well, having to be on all the time,” Higgins said. “In the long run, it is definitely rewarding.”

Once students are on campus, they can participate in the University Church of Christ, the Hub for Spiritual Life or the Well, a weekly worship service. Both the Hub and the Well are interdenominational and serve a broader range of students than just Church of Christ students.