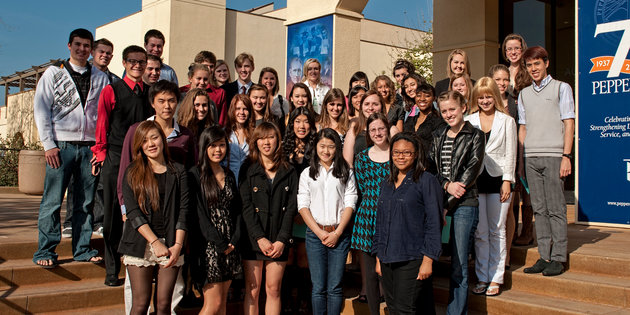 Pepperdine Psychology Honors Society, Psi Chi, is participating in and planning events that advocate for mental health awareness to increase their presence on campus.

Senior Daisy Jauregui, Psi Chi’s president, said she noticed the club’s lack of on-campus involvement and decided to take on the role of changing that, using her passion for psychology and helping others to plan more events.

“This is my first year and it’s our attempt to branch out more and be more involved in terms of mental health on campus,” Jauregui said.

Psi Chi is a International Nation Honor Society for graduate and undergraduate students of psychology that started in 1929. They began to increase their presence on Pepperdine’s campus with the help of the Student Wellness Advisory Board, or SWAB, a new pilot program in charge of planning events associated with the Health Center, the Counseling Center and Title IX, senior Hannah Roberts, SWAB co-president, said.

“I reached out to SWAB and was able to get that kind of communication going and say, ‘Hey, we are here if you ever need anything,’” Jauregui said.

Roberts said Psi Chi is invited to assist in any event and is welcome to collaborate with Healthy Minds, the mental health department of SWAB, on different projects.

“They are super excited about it and organized and ready to be involved in things and ready to revamp themselves,” Roberts said.

Psi Chi has been working with Healthy Minds and ran their own booth at the Stick or Treat event Thursday, Oct. 25, Jauregui said. For this Halloween- and carnival- themed flu shot clinic, their booth included the modern sensation of slime-making to advocate for stress reduction and self care.

“[The slime] helps promote the Sensory Meridian Response, it helps relieve stress, it helps with anxiety and just promoting a moment of happiness,” Jauregui said. “That feeling gives you a break from everything so you can release a little bit of stress.”

Psi Chi members are expressing their support in the planning of this event and the desire to increase the club’s activity, junior Leah Taylor, Psi Chi ICC representative, said.

“I think it is important for Psi Chi to be involved in events like these because our mission as a society is to help promote mental health on campus,” Taylor said. “This is a perfect opportunity to do just that by using fun activities at the same time.”

Taylor said they hope to take their involvement with mental health on campus a step beyond Stick or Treat and have expressed the desire to plan their own club convocation series for students who are interested.

“We hope to hold a club convo in which individuals can learn to cope with stress and anxiety regarding school and other aspects and how to take care of themselves mentally,” Taylor said.

Along with participating in these events to increase involvement, Psi Chi also wants these events and their increasing presence to help erase the negative stigma often associated with mental health and mental health disorders, Jauregui said.

People are often more vocal about disorders like anxiety and depression, but other disorders, like bipolar disorder, still have a negative stigma, Jauregui said.

Jauregui said Psi Chi has the goal of not only increasing the awareness of these issues through slime-making and convo, but also of making sure that people take care of themselves by finding a community and people that understand them on campus.

“I think it’s important for Psi Chi to help advocate for mental health awareness on campus and the concept of a healthy mind because college students are known to put themselves under a lot of stress regarding academics, resume building and working leadership positions in clubs,” Taylor said.

Taylor said it is also important for Psi Chi to erase the negative stigma by helping students realize that mental health is just as important as physical health.

This increased awareness for mental health can only be done if the overall club participation is increased, which is something that SWAB is eager to help Psi Chi with, Roberts said.

“Club participation here is just so lax, so that way these clubs can be supported by us through our people and our resources, and then they can be empowered to go and continue that,” Roberts said.

Roberts said it is extremely important to work to increase involvement and presence on campus now in order to keep these important clubs alive after people like Jauregui graduate.

“We can make sure that when we leave, these really important clubs that do so much for the campus are gonna stay there,” Roberts said. “Everyone we have talked to this year is just kind of sad about the lack of membership, but I can really tell that they are really ready to just drive straight in.”

Jauregui said this is only the start of Psi Chi’s advancement and revamping toward increased involvement and of the mental health awareness advancement on campus.

“We are still at the roots in terms of this movement, but as a whole we are very much blessed to be a part of it,” Jauregui said.