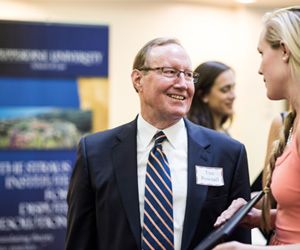 Pownall, 68, passed away at his home on Oct. 9. His family has not publicly released Pownall’s cause of death.

In an email sent to members of the Pepperdine School of Law community, Dean Deanell Tacha wrote that Pownall was “a gifted teacher and a committed peacemaker known for his dedicated work in reconciliation and thoughtful, constructive dispute resolution through initiatives like the PACIS Project for Interfaith Dialogue.”

Before working at Pepperdine, Pownall held senior executive positions with Judicial Arbitration and Mediation Services, Incorporated, the Follett Corporation, and Barnes & Noble. Pownall also helped found and served as Executive Director and Board President of the Center for Conflict Resolution.

In addition to his academic contributions to the Straus Institute and Pepperdine University, Pownall is remembered for his approachability and his personal interest in all of his students. Dean Tacha recalled that “[m]ost of all, Tim warmly embraced the opportunity to sit down with students of all ages and backgrounds for a heart-to-heart talk not just about classes and careers, but also life priorities and callings. He was a thoughtful and caring colleague and mentor. His life is cause for joyful reflection and emulation.”

Junior Gabrielle Simons, a former student of Pownall, wrote in an email about Pownall: “Dr. Pownall viewed his role as a professor and peace maker as his act of worship and did both with incredible humility. Everyone who has ever had him talks about his warm and approachable nature. His classroom was a safe place for all who entered and he had an undeniable rapport.”

Pownall’s leadership and mentorship also extended beyond the sphere of academia, as his colleague, Professor Michael Murrie, remembered.

Murrie and Pownall served together as elders at the Conejo Valley Church of Christ. “[Pownall] was a wise man who spoke calmly with care. He brought this skill into difficult and tense situations. He knew how to find common ground among those who would seem to be adversaries,” Murrie said. “We miss his ability to assess a situation and recommend a wise way to proceed. We miss how he boldly put faith into creative and thoughtful action for the Kingdom of God.”

Pownall co-facilitated a town hall on community-police relations hosted by the Reseda Church of Christ on Thursday, July 21, 2016. This town hall brought together leaders from the Los Angeles Police Department, African-American church community, and several other community members. In a telephone interview, Mr. Chris Welch, executive director of the Center for Conflict Resolution, explained the process of how Pownall’s involvement came about.

Pownall was asked to serve as facilitator of the town hall the day before the event was held. According to Welch, “[Pownall] came to be in front of the audience to speak on this potential issue without any real preparation. As any facilitator, you want to have as much preparation as possible, but he was able to diplomatically and naturally handle any kind of facilitation.”

“[Pownall] was truly a great individual and colleague and … I spread the word about how good a guy and who he was as much as possible. I think that what he was about, reconciliation and peace work has been very motivating to me.”

“I have known and admired the Pownall family for over 32 years,” Benton said. “Tim’s infectious smile; Peggy’s creative flair and artistic ability; and the whole of their remarkable family. So sweet and so loving. Tim’s mother and father were missionaries in Italy and Romania. That service ethic infused Tim’s life. He saw needs that others missed; he was willing to give when others would walk on by; his grateful heart was apparent in all that he did.”

Benton said that he honored Pownall’s pursual of peace throughout his life. “I am sad that I had no opportunity to say goodbye, but I will never forget him,” Benton said. “Our loss is heaven’s gain.”

A memorial service for Professor Timothy Pownall was held Saturday at the Conejo Valley Church of Christ in Thousand Oaks, California.

Professor Timothy Pownall is survived by his wife, Peggy, and his children, Jordan Hardman and Ty Pownall, an assistant professor of Art Sculpture at Pepperdine University.