The Pepperdine community is mourning the loss of Business Management professor Michael R. Summers. He passed away in his sleep Aug. 16.

Summers began teaching at Pepperdine in the fall of 1980 and was the longest tenured business faculty member in the Business Administration Division, according to a University press release. He taught statistics, operations management and quantitative analysis courses.

“[Summers] cared deeply about his students,” Dean of Seaver College Michael Feltner wrote in an email. “His greatest contributions were those he made both inside and outside the classroom in the lives of his students.”

Summers helped develop Seaver’s joint five-year MBA program with the Graziadio School of Business and Management. He also served for several years as a member and chairperson of the Seaver College Credit Committee, according to Feltner.

Divisional Dean of the Business Administration Division Dean Baim said he has known Summers for 36 years and that Summers was an integral part of the Business Division. Baim said his “wisdom, sense of humor and love for our division will be sorely missed.”

“He was the social director of the division,” Baim said. “He would get us together for going down to the opera here on campus, and other outings like murder mystery nights and things like that.”

Accounting Professor Marilyn Misch said she was a freshman at Pepperdine when Summers first began teaching at the university. She said she learned not only statistics from him, but also how to create and grade exams while she was a student.

“The care he took in following through errors and and giving partial credit set the example that I follow,” Misch said.

Misch said she worked together with Summers on advising students and he was someone she could always turn to when she had a question about statistics on a research project.

“Mike’s passing was a shock to all of us in the Business Administration Division and it has left a huge hole in our division and in our hearts,” Misch said. “Mike loved his wife, Ann, and the rest of his family so much, and he was so proud of his son and daughter-in-law, Adam and Wendy, and of being a grandfather.”

Summers is survived by his wife, Ann; son, Adam; daughter-in-law, Wendy; and grandson, Collin. The memorial service for Summers will be held on Sept. 24 at 11 a.m. at St. Matthew’s United Methodist Church. It is located at 1360 S. Wendy Drive in Newbury Park. A reception will follow. 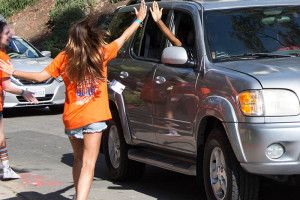