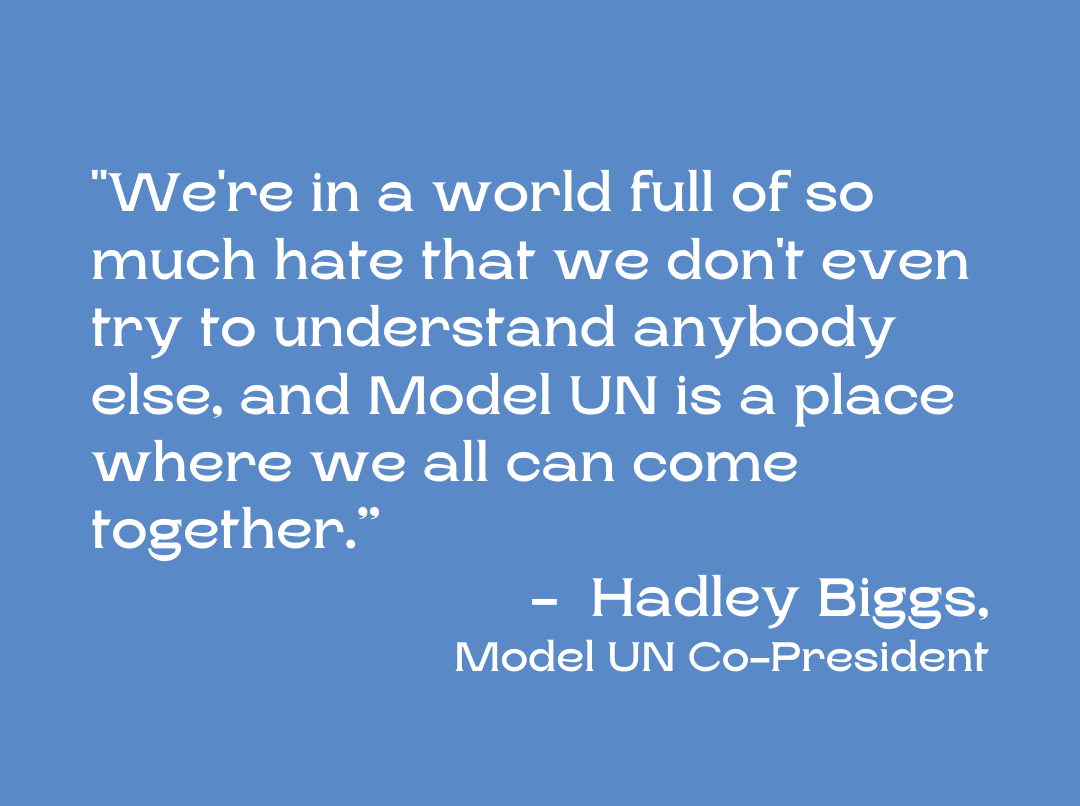 After months of preparation, the hard work of students in Pepperdine Model United Nations paid off on a national stage.

“It’s so good to have this shared experience with people from other schools and other states and other countries and other cultures who share the same passion for resolving international issues,” junior delegate Alexis Olmstead said.

March 28-31, 24 Pepperdine students participated in the conference, taking place on an online meeting platform called Gatherly. Senior Hadley Biggs, co-president of Model UN and business director of the Graphic, said in previous conferences, around 2,000-3,000 students from around the world have participated over five or six days in New York, spending nine-hour days at the conference.

Due to COVID-19 and the virtual format of this year’s conference, the conference was shorter in length and smaller in size, with around 1,500 students spending six hours a day on Gatherly.

Despite the smaller size of the conference, Pepperdine’s team totaled nearly the same amount as previous years, with every member of the Model UN chapter attending the conference.

“We’re very thankful to be able to have the same quality team, the same size because we thought we were gonna have to downsize this year just because of COVID,” Biggs said.

Biggs said the conference was a culmination of the research and practice Pepperdine’s team had worked on throughout the year.

“Overall, Model UN is a representation of the United Nations at a small scale,” Biggs said. “I think it’s a great place for people to develop their professional skills as well as their people skills and their world skills.”

The team participated in the conference on behalf of Mexico and spent months researching the policy and views of the country.

In the months leading up to the conference, Biggs said the chapter met weekly, simulating impromptu speeches and debates and writing their position papers.

Biggs said students submit the position papers months prior to the conference after conducting thorough research and writing on a topic crucial to current events from their country’s perspective. Students cover their specific topics from many angles, and the position paper covers the United Nations’ previous discussions about the topic, other countries’ stances on the topic, Mexico’s stance on the topic and other facts and figures.

“It was great to see that we still kept up with the same caliber even online,” Biggs said.

The awards also added to the number Pepperdine won the previous year when the in-person portion of the conference was canceled.

Olmstead and her partner, junior delegate Patrick Grace, wrote one of the winning 2021 papers.

Though her involvement with Model UN began when she worked with friends to bring a chapter to her high school, Olmstead’s involvement in the Pepperdine chapter started in fall 2020.

“Especially right now with COVID, I think Model UN provides an outlet for people to still meet other people that they would have met in person that are all around the world,” Olmstead said. “It teaches you how to cooperate with other people and to listen to other people’s ideas and really just communicate with others in an effective manner.”

Biggs said this year of Model UN and NMUN has filled her with hope for the future as she sees the dedication and passion of other students.

“It was such an inspirational last meeting hearing everyone’s perspective and how excited they were to do Model UN the next year,” Biggs said. “We have freshman already being like ‘Oh yeah I want to be President when I’m a senior in Model UN.’ My hopes are that the passion will never die for Model UN because it’s honestly a vital club to Pepperdine.”