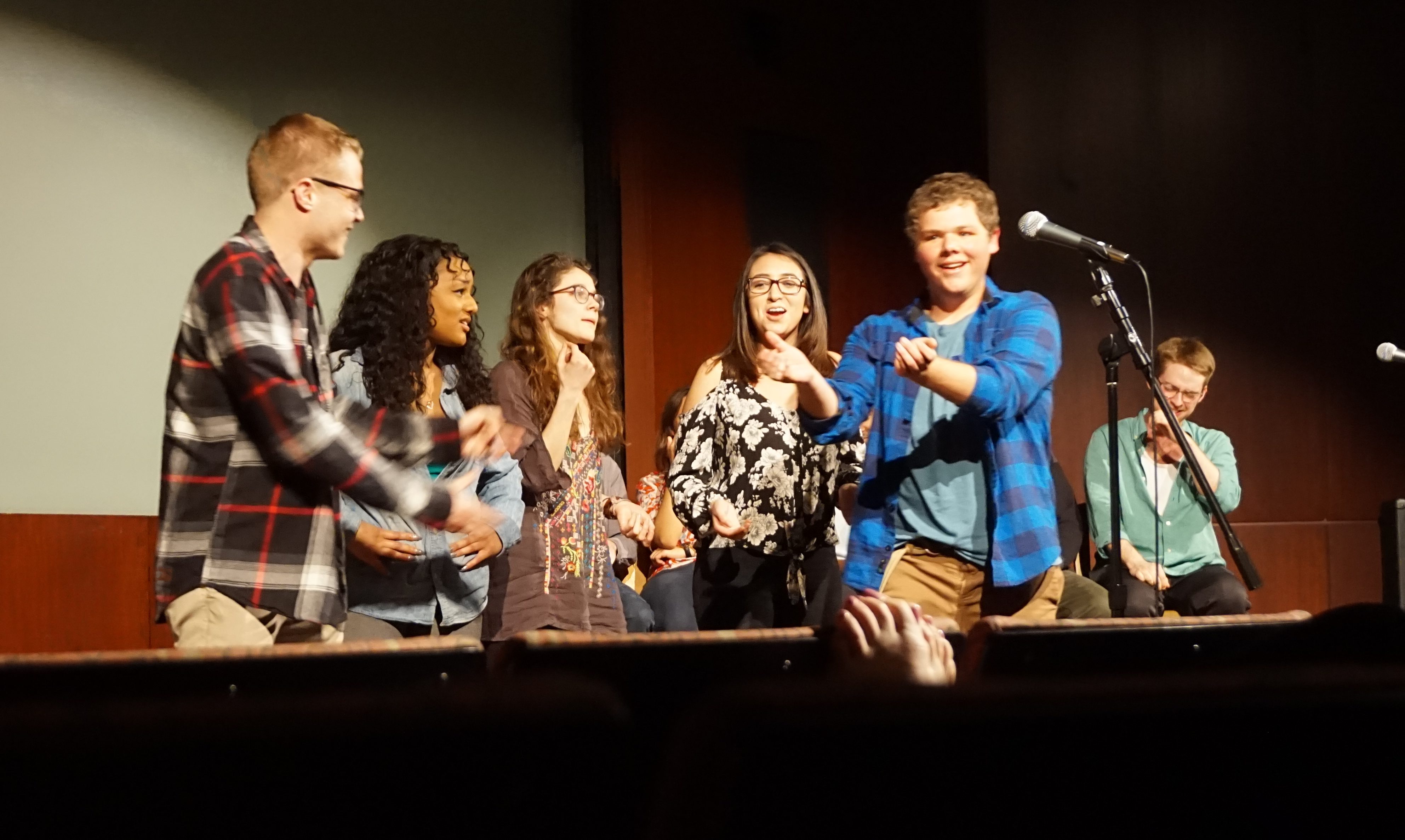 The Pepperdine Improv Troupe (PIT) began its monthly show with two teams of performers, “Zygote” and “La La Land- I Mean Moonlight,” in a fast paced dance-off that immediately drew the audience into the show.

PIT, which has been going on for 16 years, entertained audience members of all ages with improvised sketches, songs and dances March 10. Two teams of five performers each competed to win points based on the audience’s opinion of the scene, bringing loud laughter to Elkins.

PIT performers come from all different majors and years. Although they came to improv in different ways, many performers said their participation in PIT has helped them grow in their everyday lives.

Senior Callaghan McDonough, who has performed in PIT for two years, said he had been coming to PIT shows since middle school and became interested because his sisters Katharine and Meghan were involved. He said it has helped him with real life skills.

McDonough is a Philosophy major with a Sports Medicine minor. Although he does not yet know what he wants to do after graduation, he said PIT has helped him embrace this uncertainty. “The uncertainty becomes an adventure and an opportunity as opposed to something that would elicit fear,” McDonough said.

McDonough said he wants to continue practicing improv after graduation and plans to begin performing outside of PIT in the next few months.

First-year student Jordan Smith came to PIT when her friends encouraged her to audition. Even though she wasn’t prepared for the day, she took the leap and was accepted. Smith said PIT has affected her transition to life at Pepperdine. “PIT has been a really important part of me finding my niche in Pepperdine, in the arts community,” Smith said.

Smith also said PIT has helped her to accept mistakes and be more confident in her daily life. “If you think something is a mistake, you keep on going and make the best of every situation,” she said. “You have to just go out there, push yourself and have fun.”

Smith said she wants to continue improv in her life, either professionally or for fun, to continue to grow.

Senior Mele Weaver said she auditioned for PIT because she had gone to shows in her previous years at Pepperdine and loved the experience. She was always in the audience, sitting in the same seat every time. Weaver said her first and only year performing in PIT has helped her view mistakes as art.

“It’s the art of imperfection,” Weaver said. “Every day, it doesn’t matter if I make a mistake because we’re all flawed human beings and to find beauty in that is so cool … It has taught me to be a better person and a more accepting person of myself.”

Weaver said PIT has also helped her be less concerned about others judging her. “I don’t care what other people think because I’m having fun and creating things and being in this experience … It makes me look at people in our situations in such a light way. I don’t take things as seriously anymore,” she said.

Weaver, a Psychology major with a Vocational Ministry minor, does not know what she will do after graduation, but she said she is not stressed about that. She wants to continue with improv in a casual setting, to express herself and keep learning.