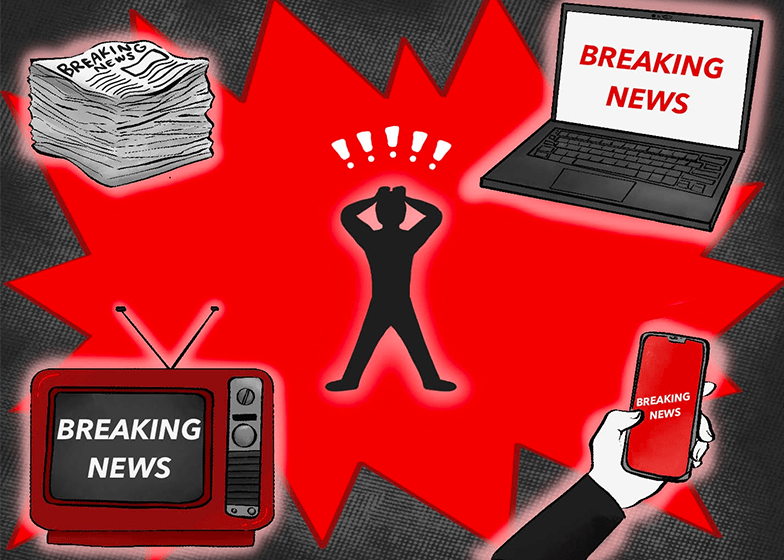 Pepperdine Graphic Media contributes to media at large by providing news for an entire collegiate community and the surrounding area. PGM is a media outlet for students who have consumed an array of news for most of their lives. While the way news is delivered continues to change and social media advances, sources speak about the criticism and hope for the future they see regarding news media.

The Pepperdine community shared their opinions regarding news credibility, PGM and how they think media will and should change. According to Gallup, 45% of Americans see a great deal of bias in news media, up from 25% in 1989 and a majority cannot name a source that reports news objectively.

Sources said they would like to see more diverse sources, credibility and thorough reporting across all news outlets.

“If mainstream media ceased to exist, people would find out how important it is, but I wouldn’t want to see the results of that,” Journalism Professor Ken Waters said.

Waters said journalism was created to hold the powerful politicians and world leaders accountable. He believes with honest and accurate reporting, this shouldn’t be difficult.

“That’s the human dimension, where mainstream media is aware and saying, ‘Yeah, I’m making decisions, and they’re based upon my judgment, and my judgment has bias in it, but I am trying to be as accurate and honest to get as many viewpoints as possible and tell the story without interjecting my opinion into it,'” Waters said.

In 2021, when people say “news,” they can mean a lot of different platforms. Sources said while they scroll through their social media platforms, they are overloaded with stories daily, and choosing which is credible can be difficult.

Junior Alyssa Rabie said she mainly gets her news through online sources such as The New York Times and social media. When it comes to social media, Rabie said most people will re-post news and she will check the original source of other posts she sees. If the account is verified, she will usually trust it.

“I think social media is a really powerful tool to keep people educated these days, especially since our generation doesn’t read newspapers or watch news as much,” Rabie said.

Rabie said she feels televised news is more generational because her parents and grandparents still prefer it. However, she said she only knows the world she was born into, which is the world of the internet.

All sources said they feel news is biased, and they think twice before believing what they are told. They also fact check while they consume their daily news.

Bias in the news might be heightened right now, Waters said, because of social media and the contest to produce and publish information. News occurs, and within minutes, stories from various news outlets are on Twitter. The reporting cannot be done as thoroughly as it should if the race to get content out and make the most money is on the forefront of most publications’ minds.

“Change is normal and natural; technology has forced change where people haven’t maybe wanted it,” Waters said. “One thing that technology has done is remove the gatekeeper. In mainstream media, you have your editors who supposedly are better educated and more experienced than the reporters, so they can ask questions and make sure that reporting is done in the most professional way possible.”

When it comes to deeming news credible, Waters said it has a lot to do with a publication and whether it has a reputation for being accurate, honest and ethical. This involves giving a voice to all different perspectives and information, which he said can be hard to do.

“Some of the ways we do journalism are a problem because then it’s ‘he said, she said,'” Waters said. “And who am I going to put first? Well, I resonate with this person’s viewpoint, so I’ll put their viewpoint first and then I’ll bring in a counter argument down toward the bottom and hope most people don’t even read that.”

“Consumers should examine multiple sources in the hope that diverse viewpoints shed greater light on a topic and help them identify misinformation,” de los Santos said.

“I’m skeptical of stories that seem like I’m getting a single or simplified vantage point on whatever’s being reported, whether it’s because of a reliance on a single source or a thin or non-existent discussion of context,” Newman said.

Rabie finds broadcast news on television to be more biased, she said.

“I think there’s 100% of bias in modern media,” Rabie said. “People are so divided these days because it’s so easy for you to just read the information that you want and then you think everyone’s reading that.”

The world is in a cultural period where people do not trust as much in general, Waters said, and people are deeming themselves as their only source of authority, while undermining truth, science and religion as sources of authority.

“We’re at a point where we don’t accept anything people say unless that reinforces what we already believe,” Waters said. “Why don’t we find a way to help people believe, a little more rationally, and then they can make better decisions and see what appears in the news and ask their own questions about whether they should believe that is truth?”

The news and constant access to all information, Rabie said, can be overwhelming; she often has to take a break.

“I stopped reading my New York Times emails and getting on social media because I couldn’t handle this much news — I didn’t want to know,” Rabie said. “But that’s not probably best for my duty as a citizen.”

When we did not have the internet, Rabie said, the news was localized to your area or country. But now, almost instantly, everyone knows about every issue going on globally, and she said this has caused an emotional toll.

There is an immense amount of news sources and in the social climate of 2021, Newman said people love criticizing the news, and he often wonders what people mean when they say “the media.”

“My sense is people have particular media outlets in mind when they criticize — not all media coverage,” Newman said. “I also sense people are quick to criticize coverage of something they don’t like — a story that makes their party or favorite public figures look bad — as biased. I try to remember that, just because I don’t like the information, doesn’t mean it’s wrong.”

When it comes to the future of journalism, Waters said he sees hope in college students and that society should be educating elementary and junior high students on news literacy.

“There’s always that hope that the next generation will say, ‘Well, the Baby Boomers screwed it up, and the millennials are screwing it up, so let’s see what we can do,'” Waters said.

De los Santos said she believes journalism is in a time of reckoning.

“The most inspiring sign to me is that the profession is really valuing and celebrating transparency and new ways of reporting and telling stories,” de los Santos said. “There’s no doubt that the news industry still faces major trust challenges. But, when you couple these advances with the fact that social media and other tools are forcing journalists to be more accountable to the public, there is reason to be optimistic.”

In regards to PGM, Rabie said it was not on her radar, but now she loves the stories covering Pepperdine-related news.

Including a wider range of student voices and finding more ways to interact and engage with students Rabie said, would increase readership within PGM.

“I think definitely having a variety of sources and viewpoints represented would increase readership and more exposure,” Rabie said. “Honestly, a lot of people don’t even know about it and that it is a news source they can go to that Pepperdine offers.”

Newman said he always enjoyed grabbing a copy of the Graphic at the entrance of the Appleby Center and he looks forward to reading new articles every week. During the pandemic he has enjoyed the Pixel newsletter.

“I scan through the articles looking for articles by or about students,” Newman said. “I also enjoy reading student perspectives and getting a sense of what students are doing, thinking about, laughing at and upset about.”

Pepperdine Graphic Media is a source for students, staff and everyone who makes up this community, and de los Santos said she appreciates PGM’s transparency when it comes to reporting on student life and the Malibu area.

“I like that PGM is already on the forefront of providing context for readers about the reporting process and your sources,” de los Santos said.

Makena Huey, senior and executive editor of Pepperdine Graphic Media, said she is proud of her team, but as with anything, there is room for improvement.

“We need to be inclusive in the sources we interview to avoid quoting the same student leaders or only speaking with people who look and think like we do,” Huey said.

Having a newsroom that is more diverse and representative of the students, Huey said, can help the community give voice to more student experiences and concerns.

“It is important we continue to increase transparency surrounding our policies and editorial decisions to help our audience understand what we do and why,” Huey said.

Nonetheless, Huey said she is excited for the future of PGM as leaders continue to engage with and earn the trust of the community.

With differing opinions on how to sustain the credibility of mass media throughout the nation, sources agree it is vital that the human race uses critical thinking to create an empathetic and loving world — through the power of news media.

“I hope that those media outlets that are trying to be honest and have integrity with accuracy and objectivity in how they report, will continue to do so, because it’ll drown out and mitigate one-sided information,” Waters said.