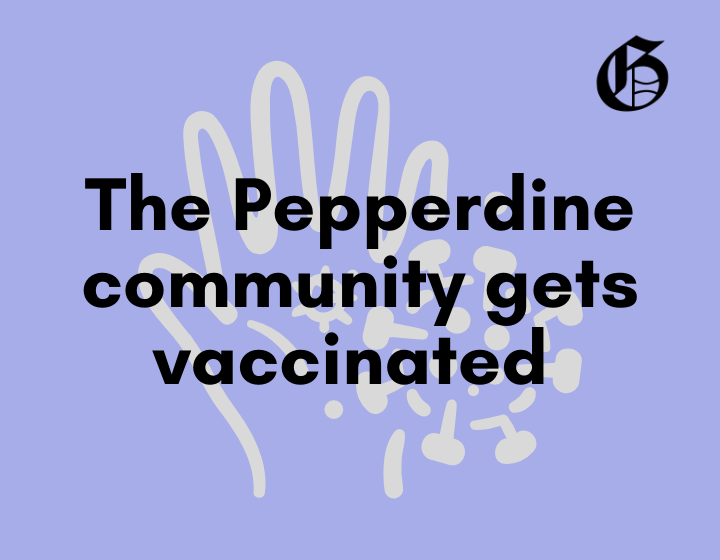 Editor’s note: *Name has been changed to protect the individual’s privacy.

Over a year since the world first encountered COVID-19, several vaccines are available to the American public, with vaccine rollouts beginning in each state. As California opens its first mass vaccination sites, Pepperdine community members look to the future mass vaccination could create.

Pepperdine has long hoped for a COVID-19 vaccine to allow for campus reopening, even delaying the academic calendar to allow for vaccine development, and while vaccination prospects remain far on the horizon for most students and faculty, some have gotten their shot.

“It just gives me a lot of hope; it’s exciting to not have to worry about it anymore, and it’s making [our] lives safer day by day,” said senior Hannah Rouse.

“We have seen a tremendous breakthrough of science and a collaboration across all sectors with political support as well as industry and the scientific community come together,” Murthy said during the event.

The two vaccines available in the United States are the Moderna and Pfizer vaccines, both approved by the Food and Drug Administration under Emergency Use Authorizations. The Moderna and Pfizer vaccines are two dose mRNA vaccines, Pfizer being administered two weeks apart and Moderna four weeks apart. Both have a 95% efficacy rate, but research has yet to determine the vaccines’ length of protection against COVID-19.

Mass vaccination does not mean everything will reopen or life will begin as it was, Murthy said during the Medical Town Hall. Individuals will need to continue social distancing and wearing masks, as the vaccine does not kill the virus, but rather boosts the individual’s immune system and helps prevent serious illness.

Some members of the Pepperdine community, however, have already gotten their COVID-19 vaccine.

Psychology Professor Steve Rouse (no relation to Hannah Rouse) was one of the 30,000 participants in the Pfizer phase three trials. Steve Rouse said he first heard of the trials over the summer through a radio advertisement. After filling out an application online, taking part in an orientation and completing an interview process, he officially became a trial participant.

“I’ve got to be honest with you, I’m kind of geeking out about it,” Steve Rouse said. “I wasn’t really worried about the disease, in terms of my own personal health. It was really that it was kind of geek-ily exciting to be in this process and to know that I was one of the first people to receive that is kind of fun.”

The Pfizer Phase 3 trials were a double-blind study, Steve Rouse said, which means he did not know if he would receive the vaccine or a placebo. In September, Steve Rouse got the first dose and received the second dose four weeks later.

“At that time, they anticipated that it would stay a blind study for a full two years, so I pretty much assumed that I would never know at least for two years whether I was vaccinated or received the placebo,” Steve Rouse said. “But once the vaccine got FDA approved, then they decided to change their procedure and let all the placebo people receive the vaccine as a second wave, so they contacted me and told me that I received the vaccine.”

As part of the trial, Pfizer required Steve Rouse to wait 20 minutes after getting the first dose to ensure he didn’t have an allergic reaction and called him daily for the few days following his first dose. Steve Rouse has also given four blood samples, three nasal swabs and keeps a symptom journal — which is fairly blank at the moment as he has yet to experience any side effects, he said.

“I know my part in it is a very, very little part, but it was something that I really believed in, I wanted us to be able to have this vaccine get studied and if it was effective, to get approved so that we could, as quickly as possible, get back to normal life,” Steve Rouse said. “I know I’m only like 1/3000 of that, but I did see that as being something important to do.”

The first phase of vaccine distribution went into the arms of front-line healthcare workers, including Hannah Rouse.

LA County’s Phase 1A vaccine distribution includes patient-facing healthcare workers and those in long-term care facilities. Hannah Rouse works at an inpatient adolescent rehabilitation facility in Malibu and became eligible to get the vaccine in January.

The most difficult part of the vaccination process was signing up for a time slot on the LA County webpage, Hannah Rouse said.

“It was just a really horrible website with not the best user interface,” Hannah Rouse said. “Vaccine slots went really quickly, so it wasn’t the most smooth experience ever. It worked, it wasn’t that challenging either, it took me a total of 30 minutes probably, to get a slot and get all my information put in and everything. You just had to go back and do it several times, because by the time you made it to the end, your vaccine slot would be gone just because so many people are signing up for it.”

Hannah Rouse went to a walk-up Moderna site, where, as a member of the Phase 1A grouping, she proved her eligibility to be vaccinated through one of the four LAC DPH documentation requirements for her first dose. In four weeks, Hannah Rouse will go back to the vaccination site with her record card to get her second dose, she said.

“It’s all outdoors, it’s really weird,” Hannah Rouse said. “If you just described it, it would be like, ‘oh yeah I let a man on the edge of a baseball park give me a shot in the arm today,’ it was weird.”

Two days after getting the vaccine, Hannah Rouse said she experienced some side effects like fatigue, body aches and running a low-grade fever, which reminded her of her COVID-19 symptoms from earlier this year.

Despite having COVID-19 antibodies, Hannah Rouse said she felt it was worth getting the vaccine as well for several reasons: because she wants to mitigate her risks of having the virus again because of her work and the risks COVID-19 creates at her facility.

“We have to completely shut down every time we have a COVID exposure and we go into full lockdown and the kids all get really stressed out and they’re already going through a really stressful time — they’re in rehab,” Hannah Rouse said. “So being able to to keep them from having to go through that is also super important to me.”

While many states have a tiered system and planned rollout for their vaccines, some vaccines are falling by the wayside. Between 20% and 40% of frontline healthcare workers in LA County rejected the vaccine and an estimated 50% of Riverside County workers did the same, according to an LA Times article.

One Pepperdine student, Jane Doe*, witnessed healthcare workers reject vaccines firsthand. Doe’s parents own urgent care clinics in Louisiana and out of the 200 Moderna vaccines offered to healthcare workers, only 20 were accepted.

“My dad called the state and was like ‘what do we do with these 180 vaccines that are going to expire in 30 days?’ and the state said ‘find an arm,’” Doe said.

Doe’s parents chose to vaccinate first their family and then reached out to local clergy to vaccinate them as well, Doe said.

“I think it’s really just opened my eyes to the amount of people that will deny the vaccine for maybe reasons that are not valid and also the urgency to get people vaccinated within the limited 30 days that we have of the vaccine expiring on shelves,” Doe said.

Doe said the process of being vaccinated revealed the questions health care workers and others have about what’s in the vaccine and the development process. Ultimately, Doe said she felt well informed and confident in the vaccine technology, especially with her family’s role in distribution.

“I think it might be hard for people to reach that information with so much misinformation going around, but I find myself in a place of a lot of comfort about the vaccine because of my situation and how much I know,” Doe said.

As mass vaccination sites begin to open around California, the general public is slowly moving up in the line to be vaccinated.

While LA county hasn’t officially entered Phase 1B — which includes other essential workers such as teachers, transportation workers, manufacturing, food and agriculture, as well as at-risk populations like the homeless and incarcerated — adults 65 and older can be vaccinated as of Jan. 19.

Pepperdine announced to faculty in a Jan. 14 Public Relations email that the Student Health Center has been approved to distribute vaccines, but the University is still awaiting guidance on who can receive the vaccine, how many doses it will get and when it can expect the vaccines.

“LADPH [sic] has indicated the education sector noted in Phase 1B Tier 1 includes employees at college and universities who are at risk of exposure,” according to the email. “We are working closely with county officials to understand the nuances of this categorization and which employees qualify for the vaccine. As we know more information, we will update the community.”

“I’m not incredibly optimistic,” Bendle said. “The vaccine is incredibly good news, but just how the rollout is going. I have friends who live in Michigan like half an hour from where Pfizer’s developing the vaccine. And no one in Michigan’s gotten it yet […] So I think it’s taken, and will still be, a while and to reasonably expect to be open like in a couple months — it’s just not realistic.”

Bendle and her family got COVID-19 in late November so she’s fine waiting to receive her vaccine while her odds of getting COVID-19 again are low. Bendle said she also holds other concerns regarding the politicization of the vaccine and the speed of development.

“It’s great that it’s available and it’s great that people can get it, [but] for me right now, I’m gonna wait a while,” Bendle said.

LA County anticipates moving into Phase 1C in March, according to the LAC DPH website. The county has not determined the qualifications for Phase 2 or beyond, but those looking to calculate their spot in the vaccine line can try KABC-TV California Vaccine Tracker for a rough estimation.