Pepperdine Comes Together to Honor the Rev. King’s Legacy and Life Through Service 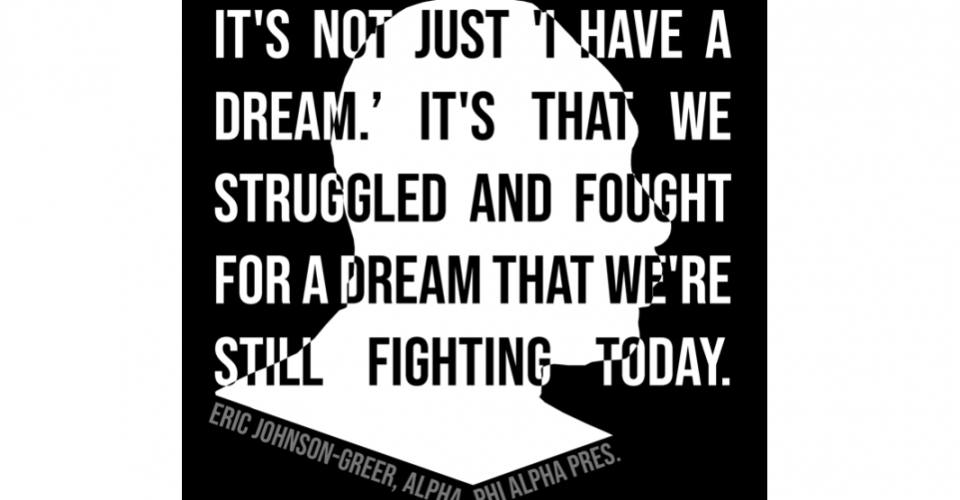 In February of 1968, the Rev. Martin Luther King Jr. said in his last sermon at Ebenezer Baptist Church that the definition of greatness is found in those who serve others.

On the 25th anniversary of the national day of service honoring the life and legacy of Civil Rights leader King, the Pepperdine Volunteer Center (PVC) partners with the Upsilon Chi chapter of Alpha Phi Alpha Fraternity, Inc., for community service Jan. 20.

Assistant Director for the PVC Anthony Rivero said the center plans a service event for the MLK Day of Service annually. This year, the PVC will serve the community at Walgrove Elementary School in Inglewood.

Eric Johnson-Greer, fifth-year senior and chapter president of Alpha Phi Alpha, said the service opportunity at Walgrove Elementary School blends together the three aims of his fraternity: manly deeds, scholarship and love for all mankind.

“We’re doing community service to enhance a learning environment for children for them to pursue their scholarship at their level, helping motivate the youth to grow and learn, which I think everybody can find inspiration in,” Johnson-Greer said

Rivero said they plan to discuss the meaning of “a day on, not a day off” at the service event.

“Service is an expansive term,” Rivero said. “It isn’t just serving that one day. We like to say awareness, action, advocacy. So it’s awareness to systemic issues, advocating for those issues to your peers and then action.”

Johnson-Greer said during the service event his fraternity will also have a platform to speak about the life, works and legacy of King. 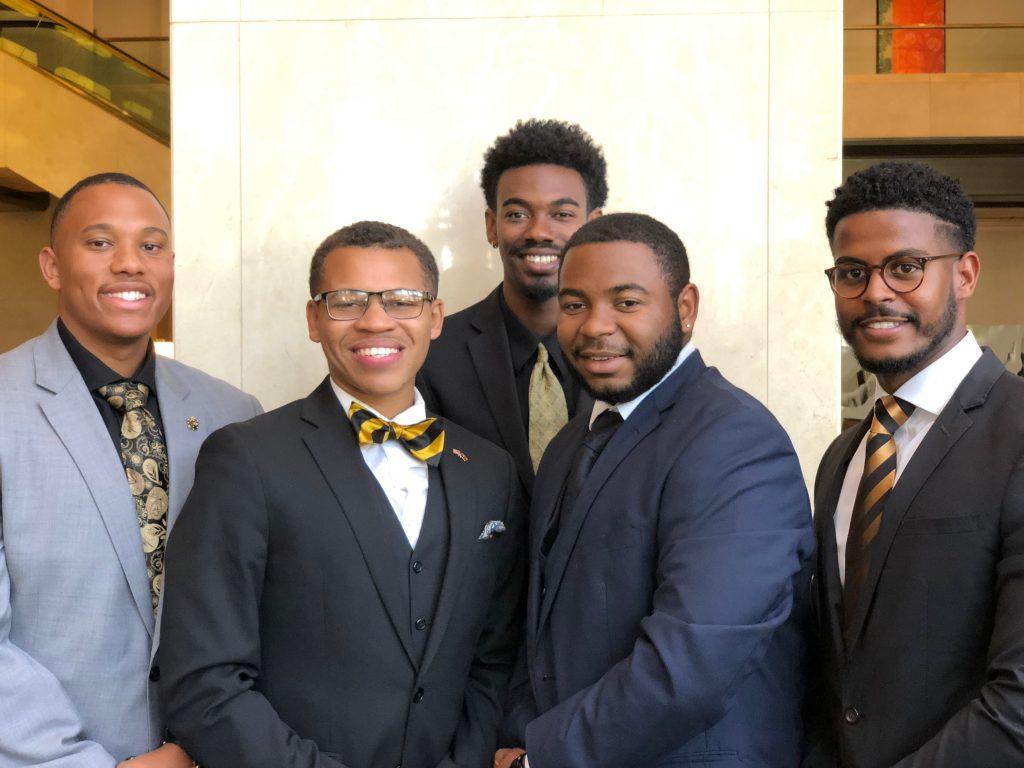 King was initiated as a brother of Alpha Phi Alpha’s Boston College chapter in 1952. Johnson-Greer said his fraternity’s unique and special connection with King inspired him to pursue a partnership with the PVC to help grow the service event and also get more student groups involved.

Although Alpha Phi Alpha has engaged in events celebrating King every year in the past, Johnson-Greer said he hopes his fraternity’s partnership with the PVC on the national day of service will become an annual tradition.

“We’re here on our campus, so we want to utilize it to create a form of programming that brings people together,” Johnson-Greer said.

Johnson-Greer said he reached out to many student groups, such as the Black Student Association, the Greek community and others to do service alongside his fraternity. He is looking forward to bridge and unite the different communities and student groups on campus during the day of service.

“If other student groups are [at the service event], then we’d be able to be doing stuff alongside people and meeting new friends and just helping to stimulate the interconnectedness of the different communities here on campus,” Johnson-Greer said. “That’s one of the big themes that’s going around in the Greek life community and one of the points of emphasis that we’re trying to drive forward.”

The Pepperdine chapter of Alpha Kappa Alpha Sorority, Inc. chose to serve this Monday on MLK Day by partnering with the Lambda Omega chapter of their sorority in Pasadena, rather than with the PVC.

Karrington Baisden, junior and treasurer of Alpha Kappa Alpha, said her sorority will collect toddlers’ clothing and donate them to the Union Station Homeless Services as part of their tradition to volunteer on MLK Day.

The Black Student Association (BSA) will also be at the service event. Their mission is to “promote unity and cultural awareness, as well as to open the Pepperdine community to the unique and universal qualities and traits of Black cultures,” according to Peppervine. 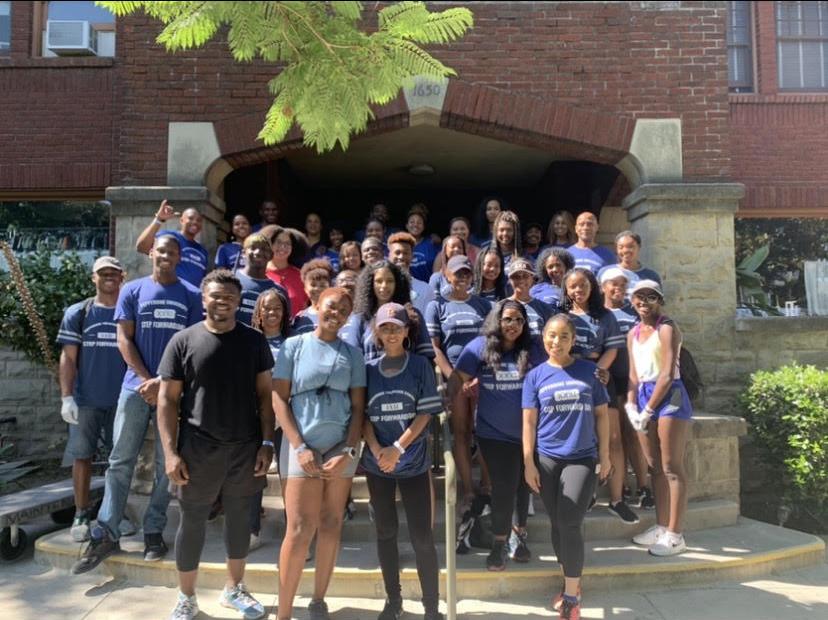 “We support what the Alphas do; this was a great opportunity to partner with them,” senior and co-president of BSA Olivia Robinson said. “Education is something that’s really important to us and BSA, especially when it comes to inner city communities and schools.”

“[King] was someone who radically fought for justice and was really someone who is for the people through service,” Robinson said. “[Service] really breaks down the barriers that would cause people to be separate otherwise and brings them together for an opportunity to do good for others, and that’s something that really embodies the spirit of Martin Luther King.”

“I feel like we get caught into a world of busyness and stress [and forget to] to stay present in the moment and understand that this day was meant for others and partnership with the community,” Rivero said.

Both Rivero and Johnson-Greer agreed that not enough people know the depth of the work of King and fail to acknowledge the scale of the Civil Rights Movement.

“I think until you really see [the past], or you really reflect back on it, you don’t appreciate [the present] as deeply as you would,” Johnson-Greer said. “So that’s what I think people miss. It’s not just ‘I Have a Dream.’ It’s that we struggled and fought for a dream that we’re still fighting today together.”

Johnson-Greer said at Pepperdine events like the MLK Wednesday Chapel that Pepperdine needs to acknowledge the whole truth, both the “happy” and “ugly” parts of what King fought for and against to better honor his life and legacy.

He thinks it would be especially meaningful if the school talked about how inequality and prejudice is still seen today, showing how King’s legacy affects everyone and how equality is still something people are fighting for.

“[King] was trying to lift [a marginalized people] up to be at the same platform as others, and in that and trying to make us all seen as one, he was fighting for all people,” Johnson-Greer said.

Robinson echoed Johnson-Greer’s emphasis on acknowledging the entire truth of the history of the Civil Rights Movement. Although people often mistakenly view King’s emphasis on nonviolence and love as submissiveness, Robinson wants people to recognize that this was not the case and that King was actually a radical leader who stood for justice.

“That’s why he was seen as a threat — not because he wanted everyone to feel good and feel as though they could stay within their comfort zone,” Robinson said.

Rivero said a way for people to continue honoring and celebrating King’s legacy beyond this Monday can be through service.

The PVC swapped the timing of the two weeks due to scheduling conflicts with the sophomore San Francisco trip and the Intercultural Affairs office. The PVC wanted to collaborate with all of their on-campus partners and therefore had to consider others’ calendars as well. They plan to continue this same schedule in the future for their two awareness weeks, according to Rivero.

The Week of Hunger and Homelessness kicks off with the MLK Day of Service. On Tuesday, the PVC will show a documentary about food waste, and then the Food Recovery Network will talk about how they combat food waste at Pepperdine.

On Wednesday, the Pepperdine community can participate in a simulation for world hunger at the Hunger Banquet. The following day, students can donate some of their meal points at a tabling event that the PVC collaborated on with Swipe Out Hunger.

“The narrative that isn’t necessarily fully touched upon in popular Pepperdine culture is that some of our friends that we know may not know where their next meal is,” Rivero said. “There are food pantries stationed all throughout the university, but then there’s also programs like Swipe Out Hunger that can also help.”

Last, the PVC partnered with the Pepperdine Art Club for an artistic event Friday, Jan. 24. The Pepperdine community will paint bowls to illustrate the number of households that experience food insecurity.

“We want everyone to come out if they’re available,” Riveo said. “We want to make these moments as collaborative as possible, so if there are people who want to add to the pot, we are more than open to adding new things and adding different ways to serve.” 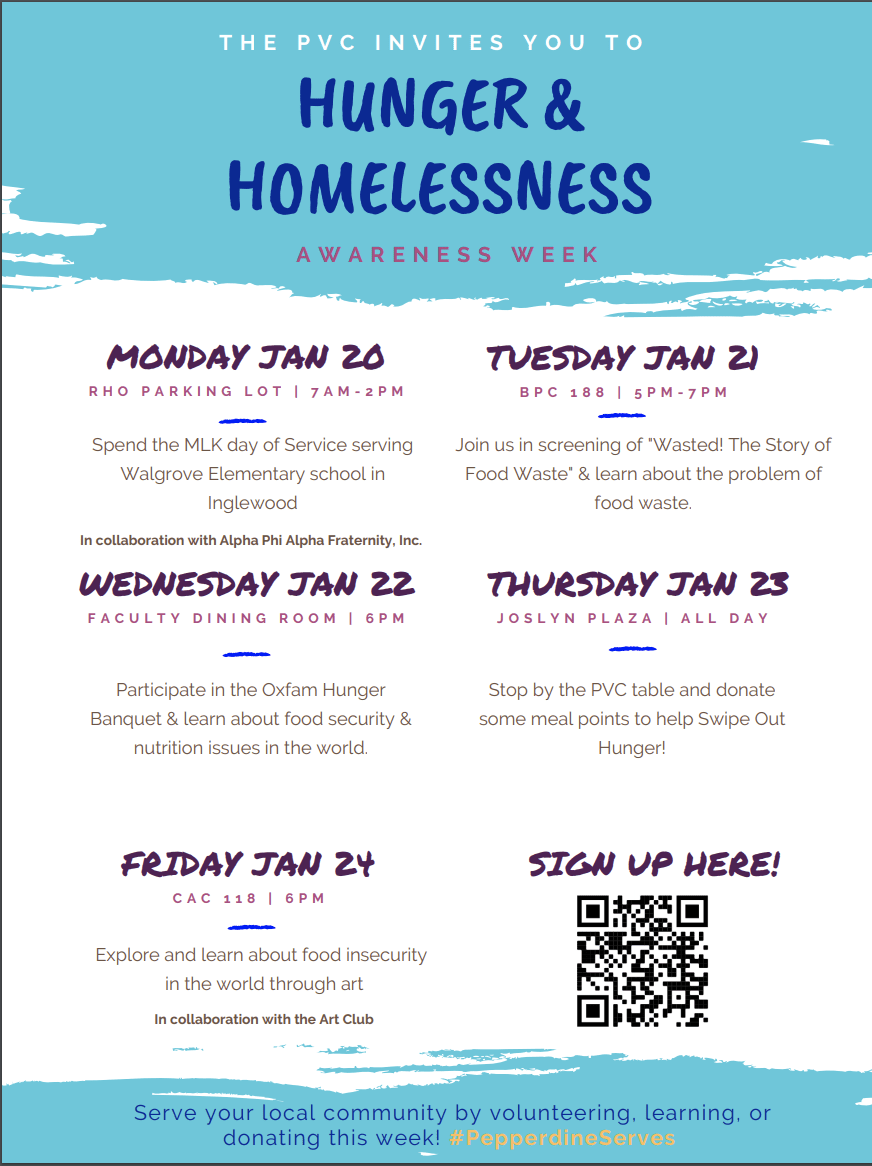 Beyond the Day and the Week

Robinson said when considering how the Pepperdine community can carry on King’s legacy beyond MLK Day, people should think about breaking down the ideologies that reinforce the systematic separation of people and are a threat to integration and diversity.

She continued to say that recognizing and understanding our biases, prejudices and utilizing one’s own privilege to uplift and get to know others is how people can break down those structures.

“If we relinquish our reliance on those privileges by acknowledging their existence, and then using their existence to bring up others around us and break down the barriers that cause others to not have that same privilege,” Robinson said. “That involves being able to see the humanity in others, despite the barriers that we might see visibly or we might think in our minds.” 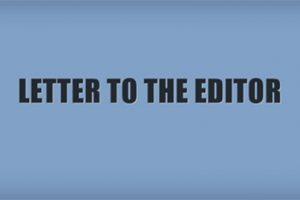