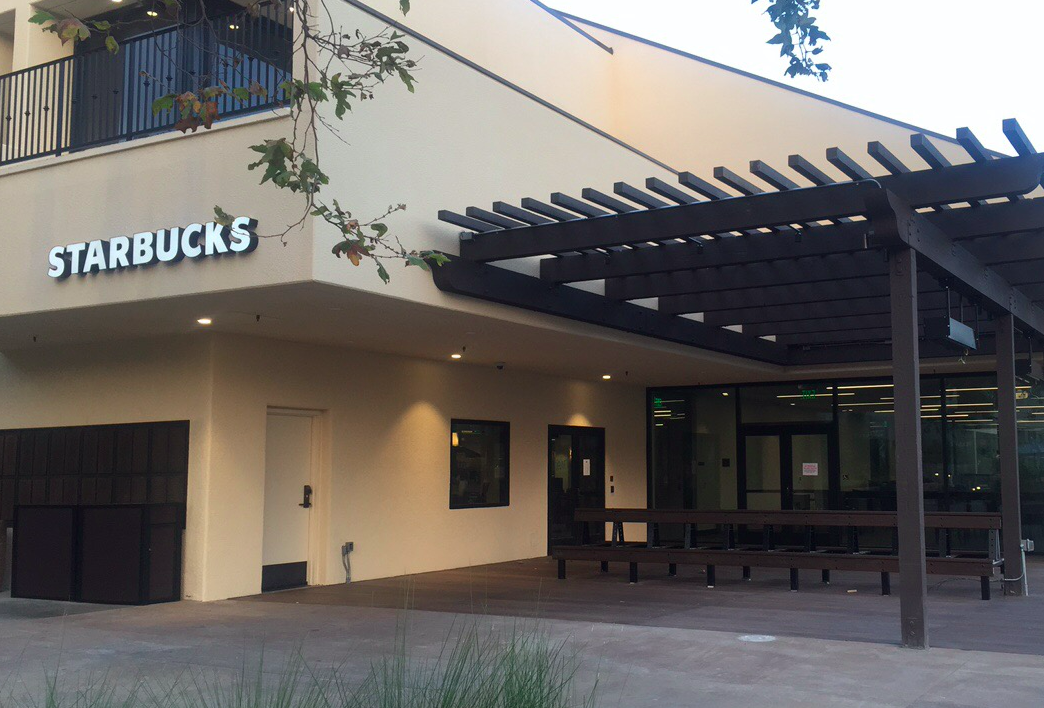 If you’re walking to class, lunch or the library, you will now find the brand-new Starbucks nestled not-so-quietly on main campus, right above Adamson Plaza across from the Sandbar. The coffee shop has been busy and buzzing since the first day of NSO, with lines out the door from open to close. Starbucks is keeping everyone, from student to professor, happy and caffeinated.

Wood paneled floors and walls, dim lighting, baristas running around making drinks as fast as possible. Pastries and snacks are on display along the walls next to a variety of Starbucks products. This Starbucks doesn’t seem to be missing anything. It is also connected to the (brand new) Payson Library via a glass wall with a sliding glass door, allowing easy access for the average studying student.

Henry Page, the manager of this new campus hot spot, gave the lowdown on all the Pepperdine Starbucks facts.

According to Page, meal points can be used to purchase all Starbucks drinks, pastries, and prepackaged snacks. However, Page said meal points will not be accepted for any Starbucks merchandise (like mugs, tumblers, etc.) or packaged coffee.

Not only is the menu the same from any other stand alone Starbucks, the Pepperdine location is the only Starbucks in Malibu that serves “Draft.”

“Draft is our cold brew coffee that contains nitrogen to give it a creamier taste,” Page said.

This “Nitro Cold Brew” can be seen advertised on the windows.

What can this Starbucks do for avid coffee drinkers with a Starbucks Rewards card?

“While you can earn Stars on your Starbucks rewards, you cannot redeem them and use them as payment here,” Page explained.

While the hours during NSO were 7:30 a.m. to 5 p.m., actual hours for the Starbucks are yet to be released.

Pepperdine students weighed in on their new option.

“I haven’t been as much because we didn’t have one on campus but now that there is I will for sure,” sophomore Kat Nance said.

Madi Chisholm admitted she’s “already been twice or three times since I’ve been on campus.

Junior Matthew Garcia said that now that Starbucks is so accessible he’ll be there “three times a day!”

Picky coffee connoisseurs need not be discouraged about the quality of the beverages being sold.

This mainstream coffee house seems like it will very quickly become a hub for the entire student body.

For the Starbucks obsessed, there are ways to get involved.

If you’re interested in working at Starbucks, all you need to do is visit Sodexo.com to apply, Page said.