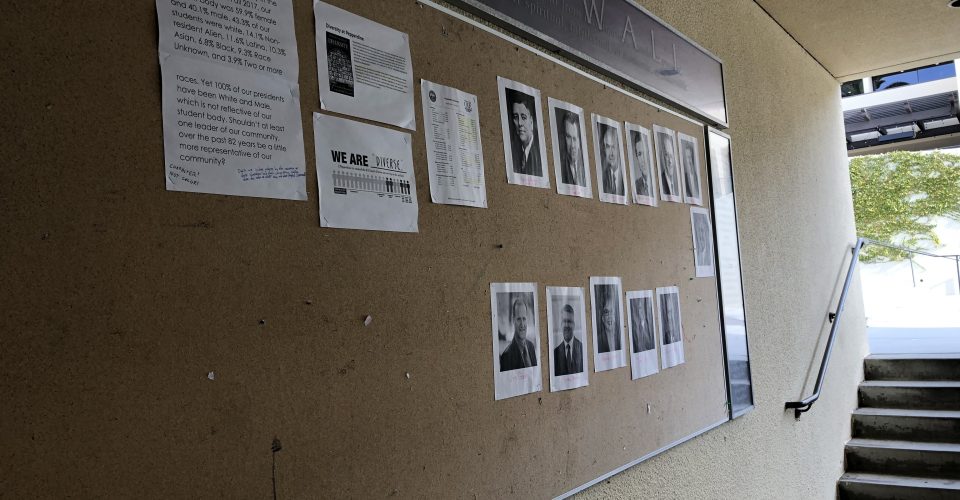 A horde of students gather around a bulletin board, muttering among themselves and snapping photos on their smartphones. The bulletin board in question is Pepperdine University’s infamous “Freedom Wall,” a forum where students are encouraged to air their opinions and typically a safe source to rely on if you’re sniffing out the current campus controversy.

The display of interest this week is a series of portraits: 11 White men and one White woman. These smiling faces are the past seven presidents of Pepperdine and the five potential candidates for the eighth.

“100% of our presidents have been White and male, which is not reflective of our student body. Shouldn’t at least one leader of our community over the past 82 years be a little more representative of our community?” a sign to the left of the portraits reads. It also states that in 2017, the student body was 43.3 percent White. According to the Pepperdine’s Admission Fast Facts website, 2018’s admitted student body was 49.2 percent White, with the remaining majority being students of color.

This Freedom Wall display is just the beginning.

In a historical shift between presidents, many on campus are calling for more diversity in Pepperdine leadership and staff to reflect the diversity in the student body.

“Our leadership must be diverse,” Associate Dean of Student Affairs for Diversity and Inclusion David Humphrey told me in his cluttered office April 8, his last day working at Pepperdine. Our interview was surrounded by partially packed boxes filled with the memories from Humphrey’s nearly three years in Malibu that he deemed worthy of packing up to his next chapter at Michigan University.

“Our leadership must be willing to bring in different voices to speak into it all,” Humphrey said. “I think only then will we begin to start feeling the effects of [diversity] across campus. But until our leadership takes ownership of it, it will just be a continuation of the status quo.”

Even the eventual Chosen One of the Presidential Search Committee, President-Elect Jim Gash, said he understood the sentiment behind the Freedom Wall protest.

“Of course, when you see five photos lined up and you see five Caucasians, the first thing you think is, ‘This is not the ideal lineup of how Pepperdine would like to be seen,’” Gash said.

Junior Adrian Manzo is Chief Financial Officer for Pepperdine’s Latino Student Association (LSA). He described the lack of diversity in the pool of presidential candidates as “discouraging” and was glad that the Freedom Wall provided a stimulus for public discussion in this case.

“I think students have a lot of different feelings on the outcome of the results [of the final five candidates],” Manzo said. “I think they were expressing it in the best way they knew how to get more awareness and get other students to become just as passionate as they were.”

Despite this considerable setback in campus diversity, Manzo said he still has hope for the future.

“We are headed in a good direction,” Manzo said. “I think that’s why now we are asking for a lot of changes and this discussion is being had, because we are getting a lot more [students] from different backgrounds and cultures. And we want to be recognized and acknowledged.”

Junior Billie Gardener, an active member of Pepperdine’s Black Student Association (BSA), said she too was discouraged at the overwhelmingly White selection of candidates.

“I think Pepperdine should put just a little bit more resources into trying to find really good, qualified people from different candidate pools,” Gardener said. “That would be my greatest hope: a more diverse faculty and staff.”

Humphrey also emphasized that, going forward, the pool of applicants was the biggest concern when focusing on diversifying in the hiring process.

Gash said diversity will be “very important” to him during his presidency. He said he hopes to continue the progress that current president, Andrew K. Benton, has made in that regard in his personal staff.

Although he is leaving the school, Humphrey said he is eager to see whether Pepperdine will truly go in that hopeful direction.

“A lot of questions will remain to be answered when President-Elect Gash is inaugurated,” Humphrey said. “Thinking deeply about who we want to be is an important question that we will have to answer.”

Although he did not directly comment on his own reasoning for leaving the university, Humphrey suggested that Pepperdine has a lot of work to do entice staff of color like himself to stay and invest in the university.

“Thinking about different recruitment programs and development opportunities will encourage, not just students, but faculty and staff of color to stay,” Humphrey said. “People don’t stay because they don’t feel like this is a place they can grow. That’s one of the reasons a person leaves because they don’t see themselves here in the future. So creating opportunities where people see themselves here, flourishing, will be necessary and important to continue to become more diverse in our staff population.”

Whether Humphrey’s job change was a declaration of surrender in the fight for diversity at Pepperdine or a coincidence following on the tail-ends of a step back in leadership diversity, Humphrey said the only thing left for him is to watch what happens next.

“At the end of the day, I guess we’ll see,” Humphrey said. “We’ll see whatever Pepperdine becomes in the next five years.”