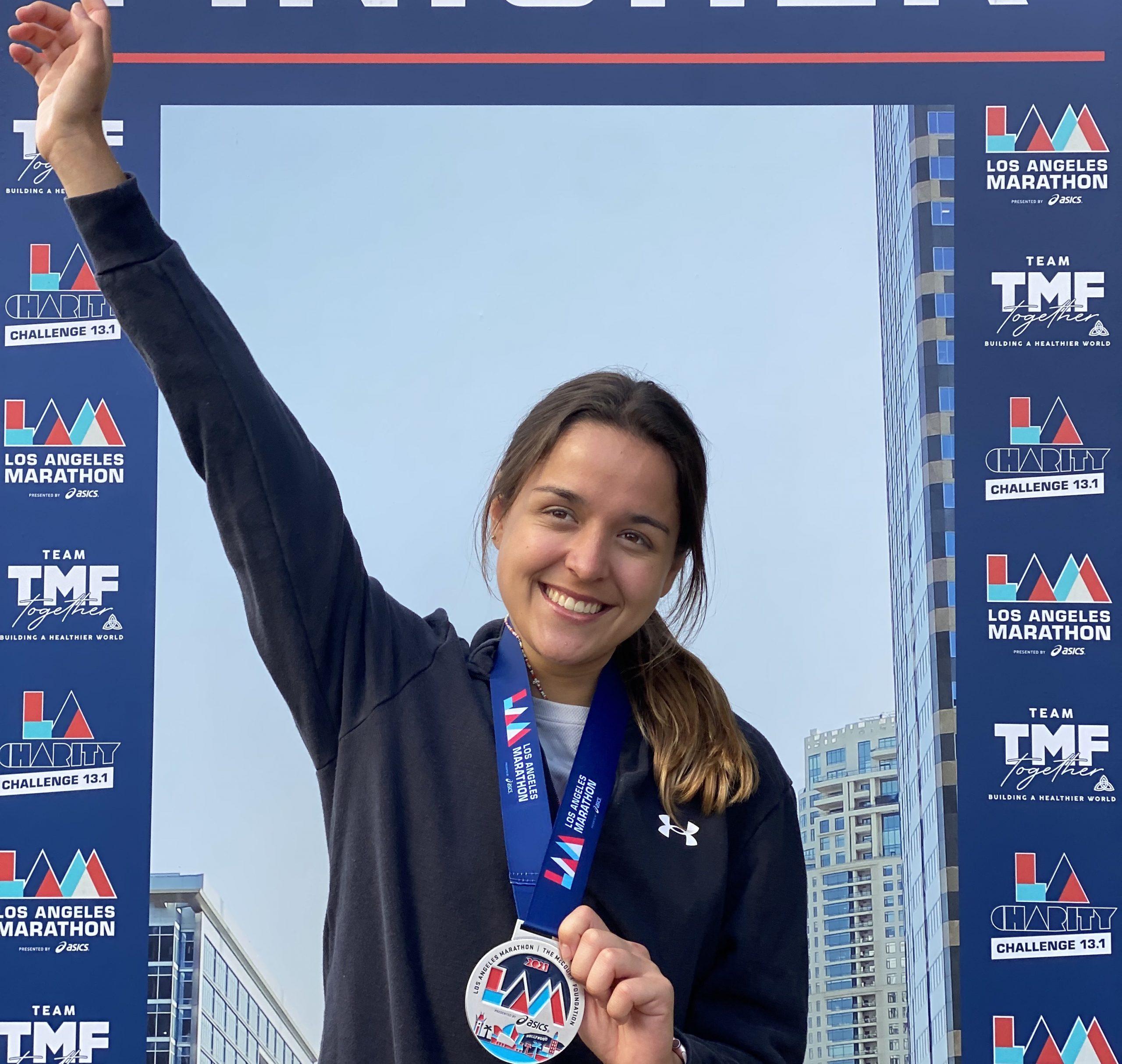 As tears trickled down her face and her legs began to give out, Pepperdine junior Mikela De La Flore reminded herself all she had to do was take one step — and then a few more after that.

Over 13,000 people gathered at Dodger Stadium on Nov. 7 to to run the Los Angeles Marathon and one of them was De La Flore. As someone who has only been consistently running for three years, De La Flore said she quickly found that marathons empowered her in a way she never felt before.

“I love to challenge myself and to prove myself that I can achieve whatever I want to achieve,” De La Flore said. “The marathon is my way of doing that.”

Discovering a Love for Running

Growing up in Lima, Peru, De La Flore said her father was an avid runner and participated in several marathons throughout her childhood.

“When I was little he would try to take me out for runs,” De La Flore said. “I remember I would be so nervous because I knew I was going to have such a hard time and he wouldn’t let me stop ever. Then he let me stop because he heard that I didn’t like it.”

De La Flore said she never ran more than a few times as a child but developed a passion for other forms of exercise throughout her teenage years, such as weight lifting, and began going to the gym daily.

It wasn’t until three years ago, when De La Flore was 18, she rediscovered running and realized she felt differently about it.

“We went to a house on the beach and there was no gym,” De La Flore said. “I was like, ‘What am I going to do? How am I going to work out?’ And my dad told me, ‘You can run — you don’t need anything to run. You have your shoes and that’s all you need. And we went for a run on the beach and I fell in love with it.”

After that, De La Flore never looked back. Her journey to becoming a marathoner accelerated quickly, and De La Flore said she feels more determined and invigorated when running than any other time.

“I remember that I would do three miles every day and I would be exhausted and dead but so happy,” De La Flore said. “And that’s where I decided I want to keep going, and three months later I was doing my first half [marathon] and then a year later my first full marathon.”

Moving daily and incorporating a variety of workouts are keys to train for marathons, De La Flore said. She also eats often to fuel her body and build muscle while taking rest days when needed.

“Inside of running, I do speed work, I do hill work and also will do my long runs once a week — I increase the distance every week,” De La Flore said. “I take off weeks sometimes from long runs, too. I cycle a lot. Swimming for miles helps a lot and a lot of strength training.”

On the day of the LA Marathon, De La Flore woke up at 3 a.m., and made sure to drink water and eat plenty of food in preparation for the 6:55 a.m., start time.

“I was ready in the start line 30 minutes before trying to get a good spot and listen to my music play,” De La Flore said. “I was trying to focus, trying to motivate myself for what was about to happen. Then, we just took off and I remember the tears. I get very emotional when I run because I love it so much.”

In February 2020, De La Flore ran the Miami Marathon — her first — in less than four-and-a-half hours with her dad. Los Angeles was a different experience, De La Flore said, but she enjoyed it more.

“This time, the energy was a little better than the Miami one, and that’s hard to say for me because I’m really attached to the Miami Marathon,” De La Flore said. “But the people, the energy, the crowds, the cheering — everything was just priceless.”

Throughout the marathon, De La Flore felt a mix of emotions and a lot of adrenaline, she said. Excitement, relief and exhaustion all met her at the finish line on the Avenue of the Stars in Hollywood five hours later, along with an abundance of love and support from her friends.

“I recorded myself crossing the finish line,” De La Flore said. “Wow, it was amazing. I was saying ‘Hi’ to every camera and smiling for every camera.”

De La Flore finished the race at four hours and 50 minutes. This time, she did not set a goal time because she wanted to enjoy every minute of her run without putting pressure on herself, De La Flore said.

“When I run, the longer I go, the stronger I feel and I get into a feeling of a trance where nothing matters — it’s just me and myself and my pace and my heart beating,” De La Flore said.

Following her second marathon, De La Flore said she has more on her list for the upcoming year, including Life Lima 42k, which she plans to run with her father in her hometown in Lima, Peru in May 2022.

With each accomplishment comes a need for more, De La Flore said, and she hopes to run a 100 mile race.

“I think I still can’t believe what I’ve done,” De La Flore said. “It’s a lot and I was grateful because I not only have the ability — the legs to run — but also the love for running that I have. I’m so grateful that I love running so much that I can do it because I know it’s my love that lets me do it.”