Pacific Coast Highway Captures Attention for its Scenery and its Crashes 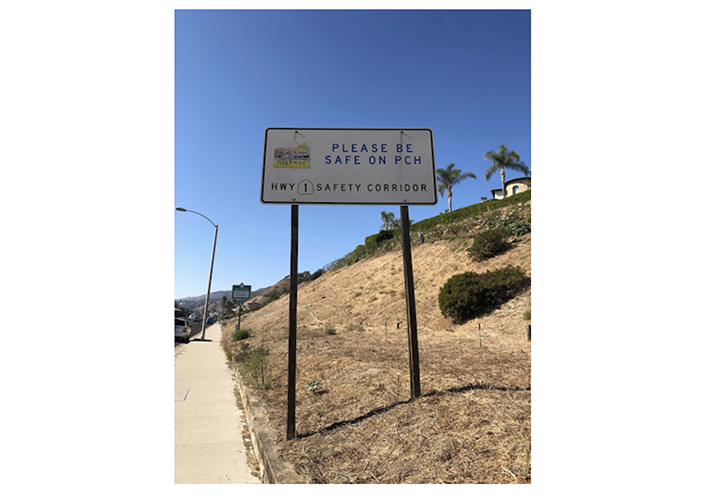 This past Friday, Nov. 8, Pacific Coast Highway claimed another life.

Commuter students take PCH every day, unaware of the growing list of fatalities and injury accidents due to reckless driving along the iconic roadway.

The highway carries about 37,000 cars near the Malibu Civic Center on an average day. In the summer, those numbers increase by 3,000 to 5,000 a day, according to the Los Angeles Times.

A higher volume of cars means a higher risk of accidents. In 2018, there were three fatal accidents and 131 injury accidents due to issues including unsafe speed, unsafe lane change, following too closely, improper turning, driving under the influence and right of way violations, according to the UC Berkeley SafeTREC Transportation Injury Mapping System. From 2015 to 2018, there were 633 injury accidents and 17 fatal accidents.

Under California Vehicle Code 23103, reckless driving is defined as driving a vehicle “in willful or wanton disregard for the safety of persons or property,” according to California Legislative Information.

Chris Frost, chair of the Malibu Safety Commission, said that reckless driving is an umbrella term.

“Reckless isn’t usually what’s written, it’s speed,” Frost said. “That’s a tough one to track because it’s usually a preemptive ticket if it’s something else that’s going to drive that ticket besides reckless. It does show up, but not as often.”

California Highway Patrol Officer Wes Haver said the crime of reckless driving is highly dependent on the circumstances of each individual case.

“If they’re arrested, not just cited, it would be a misdemeanor,” Haver said. “If they killed someone, it might be bumped up to involuntary manslaughter, which means they didn’t mean to do it, but they knew the risks associated with that reckless driving.”

Things like drifting and tire screeching help build the case for the officer to prove to a court that the reckless driving charge is justified, Haver said.

During the weekends, the mountain roads in Calabasas and Agoura Hills are known spots for reckless driving incidents; Haver said he gets multiple complaints from residents about dangerous drivers.

“Mulholland Highway attracts people from all over the world,” Haver said. “Whether they’re from overseas or from Orange County just here for a day ride … we pretty much get it all due to the beautiful scenery.”

Pepperdine alumna (1982) Carol Hahn has lived in Malibu since 1997. Hahn said she is all too familiar with reckless driving, as her daily commute includes PCH.

“I think living here and knowing how dangerous the highway is and can be, it’s ingrained into my mind to drive defensively … [I] look out for people coming up behind me real fast, look out ahead [to see] if somebody is drunk or speeding too fast,” Hahn said.

Hahn said driving on PCH was safer during her student years, and that current efforts to make PCH safer do not focus as much on prevention.

“We didn’t have the cameras at the intersections, and now the only way they can use those is after the fact, after there’s been a smash up and a death,” Hahn said. “Then, they go back to the cameras and they look for the cars that were involved.”

In 2018, Hahn wrote a letter to the editor of the Malibu Times about a particular reckless driving incident when a sheriff did not respond to her 911 call. Hahn ended the letter with, “Please, help!”

“I was calling 911, I said ‘Get a sheriff out here, this guy will not move. I think I’m going to be rear-ended,’” Hahn said. “[The dispatcher] told me it’s going to take 20 minutes for an officer to get there. I could have been plowed into by then.”

Frost said part of the problem with reckless driving on PCH is the lack of traffic enforcement.

“We can enact laws, we can do all kinds of stuff, but you need people to enforce them, and we’ve got a 21 mile stretch of ground here and we need more law enforcement than we’re putting on the ground,” Frost said.

Frost said this was the first year that there was not a fatality in the summer, thanks to Lt. Jennifer Seetoo — the Malibu representative of the Lost Hills Sheriff’s Station — and her efforts to curb accidents on PCH.

“Jennifer Seetoo was successful in starting a zone enforcement that broke Malibu up into zones and assigned patrol cars to those zones, so they were able to work that zone instead of driving from Topanga to County Line,” Frost said. “That meant that you had all the zones covered and that helped a lot.”

Frost said until people start driving better, however, PCH will remain just as dangerous, or get even worse.

“Speed on the highway is a big deal, but distracted driving, running red lights, curb-to-curb U-turns are a big one; I almost got into an accident tonight with somebody turning through the cones at Sycamore Park where the road is being fixed,” Frost said. 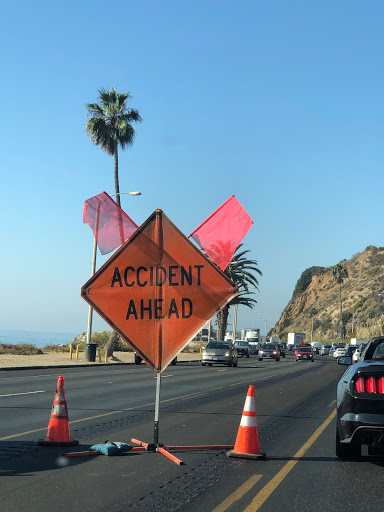 A deadly crash shut down stretches of PCH for six hours on Nov. 8. Photo by Anastassia Kostin.

“People think they’re entitled to do these things and the law doesn’t count for them because they live here; they’re rich, they’re a movie star, there’s something else,” Frost said.

“The problem is, for us to [make PCH safer], we need to double the amount of deputies we have on the highway, and we have to teach them good traffic enforcement,” Frost said.

Frost said prior to Malibu’s incorporation as city in 1991, the California Highway Patrol (CHP) was responsible for patrolling PCH and issuing tickets for traffic violations. That changed when the city incorporated and contracted with the county sheriff’s department for police services.

“So the one thing that will make our highways safer? Put [California] Highway Patrol back on,” Frost said. “But we can’t, because when we became a city, they passed a law that unless you want to hire them and pay for them out of your pocket, the state’s not going to provide them.” 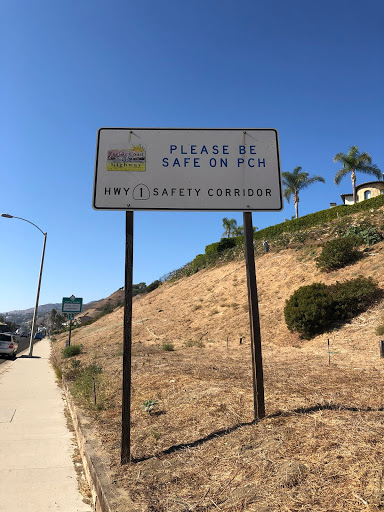 “Please be safe on PCH” sign. Photo by Anastassia Kostin.

Frost said Malibu pays over $8 million dollars to the Sheriff’s Department to both enforce the law and ticket people that are breaking traffic violations, but added that they do a “crappy job of traffic enforcement.”

“There’s individual people that do a good job, but some of them concentrate too much on speed and the radar gun and not enough on all the other things they should be looking at — people going over the double [line], people not paying attention, people swerving, running red lights, you name it,” Frost said.

In addition to the zoning enforcement, Frost said the Malibu Beach Team at Zuma Beach is instructed to enforce traffic during the summer if they are not patrolling the beaches.

“We also have officers on bicycles,” Frost said. “People driving along see them and it’s a deterrent, so that’s a good thing. But they need a lot more officers on the highway or the [California] Highway Patrol. If they have that presence with both … that’d be gold.”

Increased numbers of tourists during the summer is not the sole reason for increased police presence, Frost said.

“It’s not like we’re specifically saying, ‘They don’t know the dangers of PCH, so we’re going to go out and protect them’; It’s to protect everybody, ” Frost said. “In many cases, they are the dangers of PCH because they do things on the highway that are unsafe.”

So, what can be done?

Individuals such as Michel Shane is currently working on “21 Miles,” a documentary exploring why so many people are killed in Malibu on PCH, after a reckless driver struck his 13-year-old daughter Emily Rose Shane along PCH in 2010.

On a larger scale, the City of Malibu conducted a Malibu Safety Study in 2015 to “examine current road conditions, determine accident patterns, assess traffic conflicts, and develop strategies to improve safety on PCH.” Hahn said there should be an updated report.

“It’s almost five years now since 2015, and I think it’s about time to do another traffic study,” Hahn said.

“PCH is dangerous; it’s just the reality of it,” Hahn said. “Always allow more time to get to campus, instead of racing down the highway. Just be defensive.”

Pepperdine Graphic Media introduces The Graph, a news podcast. Look for Episode 1 on Thursday, Nov. 14 wherever you listen...
Copyright 2013 Jupiter Premium Magazine Theme
Back to top