This years Oscar nominations are so refreshing and diverse coming off last year’s “Oscars so White” scandal. As a young actress of color, this is so empowering and motivating to see.

Often, I get asked what my “type” is, meaning which actresses with whom I compare. That question has always been difficult because there are few actresses represented on screen who look like me. I struggle between answering with the name of an actress who plays the types of roles I would like to play versus an actress who actually looks like me. I could never have the best of both worlds. Today, that is becoming less and less of a problem.

As an actress preparing to step into the “real world,” this feels like a great time to be in Hollywood. Diverse stories are being told, and a wide array of actors are playing them. Less and less are characters being stigmatized by the color of their skin, the shapes of their bodies or their gender. Less and less do we have to worry about whether or not certain stories are allowed to be told. This year’s Oscar nominees include movies like “Moonlight,” “Hidden Figures,” “Lion,” “Loving,” “Fences,” “Moana,” and documentaries such as “I Am Not Your Negro,” “O.J. Made in America” and “13th” released by Oscars January 27, 2017.

What an amazing rainbow of melanin we have in these films. Not only are the casts made up of actors and actresses of color, but they are fully developed stories of humanity. They are not stereotypes; these are real, breathing and fully feeling characters.

I am blessed to be in the company of such beautiful and fantastic actresses. This means that I too can be in their shoes one day and don’t have to worry about whether the content of the story rings true for people of color because, as we see, truthful stories are being told.

In January, I had the opportunity of attending the Sundance Film Festival, which is one of the largest film festivals in the industry. It opened my eyes to the vast number of stories being told that I never get to see. There were many important films at this festival about music, race, different economic backgrounds, mental health, etc; It saddened me to think that not everyone will have the opportunity to see these films due to the politics of distribution and what will make the most money. Be that as it may, I am still encouraged because more people in mainstream Hollywood are recognizing the importance of representing all people in film and telling stories that do not normally get to be told.

As I am about to graduate Pepperdine with my bachelor’s in theater acting, I feel passionate and determined to find these great stories that do, in fact, exist. I believe as film producers, writers, directors and actors continue to be more diverse and inclusive, we can change our culture from one of fear, anger, and judgmental attitudes, to one of love, acceptance, and empathy. To all the hardworking minorities in the entertainment industry: Keep up the beautiful work. 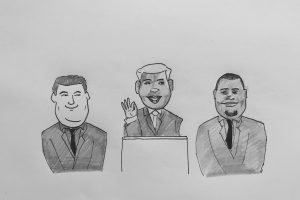 Art by Peau PorotesanoEnvision a Sunday morning where the official Twitter account for the President of the United States...
Copyright 2013 Jupiter Premium Magazine Theme
Back to top