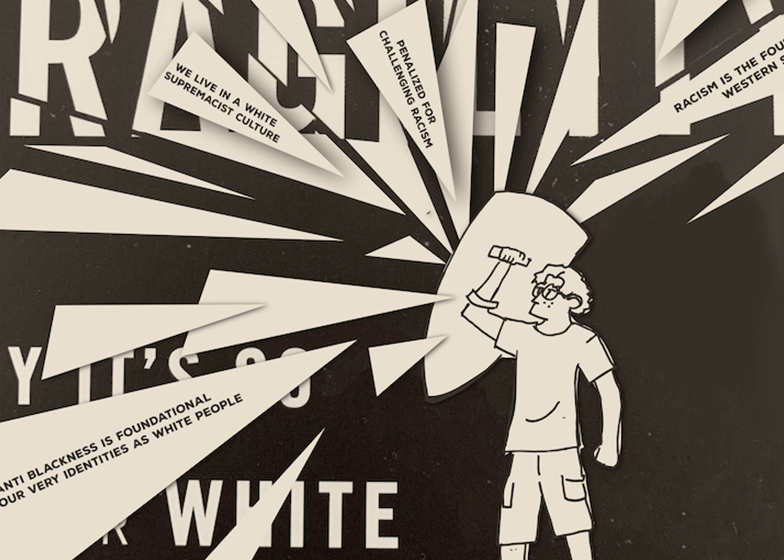 In the midst of the Black Lives Matter movement and the accompanying protests and riots that the United States witnessed over the summer, the Student Wellness Advisory Board decided to take action and host a book giveaway last June. In February, the Student Government Association decided to follow suit and host a giveaway of their own.

Both organizations gave away “White Fragility” by Robin DiAngelo, which explores “the counterproductive reactions white people have when their assumptions about race are challenged.”

Among the wild claims found between the covers of “White Fragility” is DiAngelo’s assertion that “we are socially penalized for challenging racism.” DiAngelo’s own business model exposes the unmistakable absurdity of this idea.

Her claim is particularly ironic given that she masquerades as a revolutionary while making a living off of calling middle-class workers racist — supposedly “challenging racism” — in presentations sponsored by powerful moneyed interests like Amazon, the Bill and Melinda Gates Foundation, various universities, municipal governments and school districts. While she claims that we live in a “white supremacist culture,” and that white bias is “backed by institutional power,” her own business model undermines this faulty understanding.

If white supremacy really did inform our cultural trendsetters and dominate our society’s most powerful institutions — including government, academia and multi-billion dollar corporations — it’d seem that DiAngelo might have a harder time getting hired by these very same institutions to do high paid speaking gigs.

In reality, calling out real or imagined racism is the most socially profitable way to virtue signal, a practice that involves publicly displaying approved opinions in order to gain acceptance from peers. The millions of black squares posted on Instagram on June 2, in support of BLM are testaments to this fact, given that they had no beneficial impact but served to ward off accusations of racism from the social justice movement’s digital hall monitors. Actor Jussie Smollett even fabricated a racist hate crime to give himself the chance to “challenge racism” in his own desperate attempt to virtue signal.

Meanwhile, those who are wrongly accused of racism have faced draconian social penalties. Take, for example, the false allegations of racism that led to the firing of one man over making the OK sign or the suspension of a Univerisity of California, Los Angeles professor who was called racist after refusing to waive a final following the death of George Floyd in an unapologetic email. Equally as striking was an incident at Evergreen State College where protesters disrupted former professor Bret Weinstein‘s class after he “objected to a planned ‘Day of Absence’ in which white people were asked to leave campus” according to his testimony.

These social penalties have real, tangible costs. A survey from the Foundation for Individual Rights in Education found that a majority of college students self-censor in the classroom, likely because they understand the costs of voicing unapproved opinions.

Perhaps the hesitance to broach controversial topics isn’t a sign of “fragility” like DiAngelo lambasts but rather of a fear of being socially or economically penalized over imaginary wrongdoings.

Unfortunately, DiAngelo’s ideology isn’t just hopelessly incoherent; it’s sinister. DiAngelo removes the mask entirely and takes it a step further in her book, remarking that “anti-blackness is foundational to our very identities as white people.” In other words, to be white is to be racist. DiAngelo doesn’t just think they’re related; she thinks they’re synonymous. “White Fragility” undeniably singles out and attacks a specific racial group — even the title makes this clear.

Do SWAB and SGA agree with this flagrantly anti-white message that they endorsed with our money? It’s a question worth asking, and it’s a question that deserves an answer.

If there’s still any doubt that DiAngelo profits off of attacking an entire racial group, further evidence can be found in these leaked screenshots from DiAngelo’s seminar with Coca-Cola, where she demanded that participants “try to be less white.” DiAngelo continues, explaining that being less white means being “less oppressive,” “less arrogant” and “more humble.” In DiAngelo’s opinion, negative qualities are the defining characteristics of white people.

Why is this tolerated? Better yet, why is it funded by a University that pledges in its Affirmation Statement that the student is a “person of infinite dignity”? Are people not denied their dignity when they’re told that they’re evil, simply by the circumstance of their birth? What dignity is afforded to those who are told that they are born with a sickness?

If the conflict between Pepperdine’s mission and the vitriol that spills out of the pages of “White Fragility” isn’t apparent, notice that DiAngelo confidently states on her website that “racism is the foundation of Western society.”

This claim that racism — not Christianity — serves as the foundation of our society should startle our faculty, alumni, donors, administration, board members and our university as a whole, given our commitment to Western civilization within our curriculum.

DiAngelo’s doctrine is one of sin without redemption, as well as putrid, crippling self-hatred, all of which is rooted in a belief that people are tainted by the circumstance of their birth. Even worse, the solvency of her entire business model is dependent on the creation and perpetuation of collective shame.

Under this toxic worldview, one doesn’t need to commit a crime to be found guilty.

Students unknowingly subsidized this animus when SWAB and SGA made the shameful decision to promote an author who has made a career off of repurposing — not fighting — racism. There is not a single student, regardless of their race, who is served by this decision.

How such a decision serves our campus community or promotes wellness in any capacity — not to mention basic decency — is entirely unclear.

SWAB’s and SGA’s decision to promote, financially support and give away a book dedicated to promoting racial hatred and to amplify an author who has made her career off of promoting racial masochism wasn’t just irresponsible, it was unacceptable and grossly unethical. To do so with student money is even more egregious.

This decision betrayed the foundation of the university by endorsing a doctrine defined by blatant racial animosity. If SWAB and SGA are truly dedicated to our university’s mission and the students they serve, we should expect a swift apology for this mistake. Time will tell.