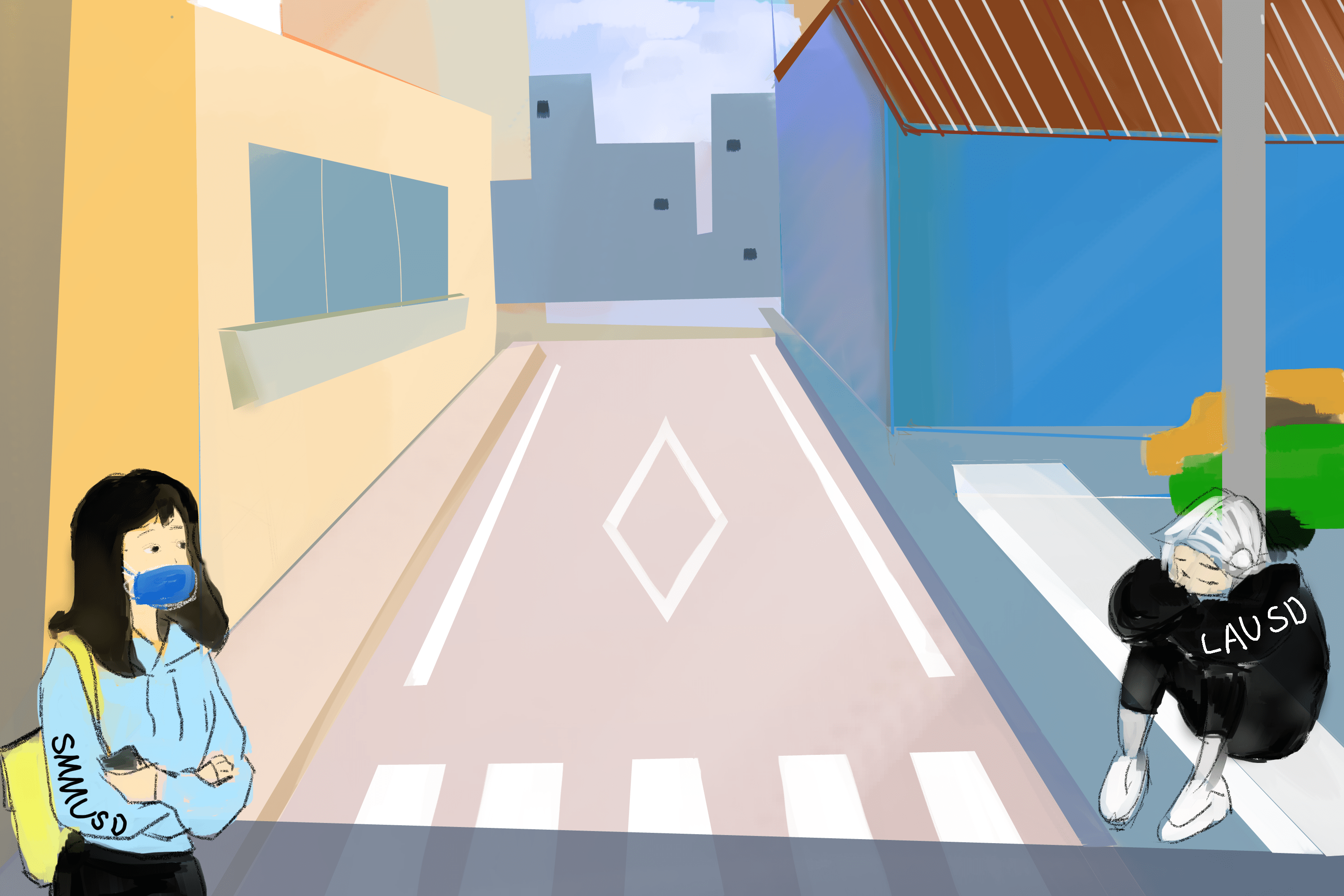 It is not privileged for parents to simply want their children to return to some form of normalcy in their education, but this privilege is what allows more affluent families in Malibu and Santa Monica, Calif., not to struggle as much as less fortunate families with finding and affording childcare.

In SMMUSD’s plans to reopen, it is clear that going to school in an affluent area pays off, as the community median household income is $98,455, according to NCES. But, for the less-advantaged LAUSD, which has a community median household income of $66,530 — according to Census Reporter — plans of a hybrid learning model seemed unattainable as leaders ignored their requests for reopening.

In a joint statement from SMMUSD and the Santa Monica-Malibu Classroom Teachers Association, the implementation of a hybrid schedule of learning begins April 12.

“Elementary schools will implement a five-day school week with students attending school on-site/in-person four (4) days per week and engaged in one (1) day of synchronous/asynchronous learning,” according to the statement.

Parents pushed for the reopening of schools in the area, according to an article from the Santa Monica Daily Press.

LAUSD is the second-largest school district in the country, just behind New York City Department of Education, with its 2019 enrollment totaling 633,621, according to the Census Bureau. The National Center for Education Statistics reported SMMUSD’s enrollment that same year to be 10,625 — a mere fraction of LAUSD’s student population.

Though these districts are both public and within LA County, their student demographics exemplify which districts in Southern California are being granted reopening rights.

SMMUSD’s student population is 67% white, according to a report from NCES. Comparatively, the Los Angeles Regional Adult Education Consortium reported that LAUSD’s largest student racial demographic is 73.4% Hispanic, while only 8.8% of this same population is white. The obvious disadvantages of being in an overwhelmingly non-white district are evident in LAUSD’s inability to reopen when compared with SMMUSD.

Superintendent Austin Beutner publicly shared letters the district has sent to its government officials since the beginning of 2021. LAUSD expressed an explicit desire to reopen its schools but has only been met with silence from leaders.

“Los Angeles Unified, together with its labor partners, the Los Angeles delegation in Sacramento and Washington D.C. and other large schools districts in California, have been advocating at all levels of government for the funds schools desperately need to reopen in the safest way possible,” Beutner said in the Feb.1 letter. “Not one of the many letters we’ve sent have received a response.”

In a March 29 update, Superintendent Beutner released a tweet detailing LAUSD’s reopening plan. Commencing April 12, 61 elementary schools and 11 early education centers are set to reopen, according to NBC. The remainder of schools are scheduled to open the week of April 19 while middle and high schools are expected to open by the end of the month. Parents still have the option to continue with online learning.

Parents often rely on the school day as a means of providing child care. With schools now reopening, some parents choosing to opt out of sending their kids back still have to juggle child care needs while trying to work. Not every parent has the ability to stay home from work to take care of their child during online learning or the financial means to afford child care.

Eighty percent of LAUSD students come from low-income communities, according to the LA Times. Despite this reopening, many parents living in heavily impacted COVID-19 communities like Southeast Los Angeles and northeast San Fernando Valley are holding off on sending their children back to school, according to the same article.

There is currently no data available as to specifically why, but these same cities reflect the case statistics of communities of color being affected most by COVID-19. With the potential fear of surging cases along with wanting to keep their children safe, parents may choose to op-out of sending them back to school for this reason.

The argument can be made that SMMUSD may have opened before LAUSD, simply because it is a smaller, easier to manage district. But, the racial and socioeconomic implications of a predominantly white school district in a well-off area establishing plans for hybrid learning before LAUSD are undeniable.

Parents who pushed for SMMUSD’s reopening should now shift their focus and motivation toward using the same tactics, including meeting with the board of education, to push for the reopening of less-fortunate southern California districts because education for all is a right — not just a privilege for those with the right resources.