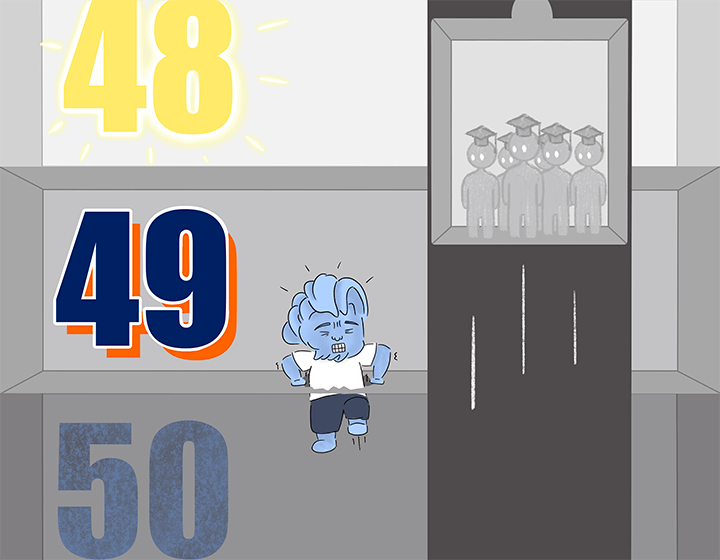 For the second consecutive year, the U.S. News & World Report ranked Pepperdine University No. 49 in Best National Universities. But what does that mean?

Although it is impressive that Pepperdine maintained its top 50 position, the static standing signifies the University has a lot of potential to raise its ranking.

To climb the ranks, Pepperdine should take advantage of its small class sizes by providing more meaningful learning environments.

Pepperdine maintains its ranking by scoring exceptionally in notable categories such as Best College for Veterans, Undergraduate Teaching and Study Abroad.

Pepperdine currently shares the No. 49 spot with five other universities, such as Purdue University and Northeastern University. Juxtaposed to these other schools, Pepperdine is neither the best nor the worst in any of the nine categories.

Pepperdine, however, is ranked No. 175, according to Wall Street Journal and Times Higher Education’s 2022 College Rankings List.

According to this WSJ ranking, Pepperdine is slotted significantly lower than its neighboring schools, such as Loyola Marymount University and the University of California, Los Angeles — evaluated at No. 90 and No. 27, respectively.

Moreover, all five other schools ranked at No. 49 on the U.S. News list placed higher than Pepperdine on the WSJ list.

The reason for Pepperdine’s downfall in this particular ranking is due to its resources score. In determining resources scores, WSJ and THE examines three factors, including the amount of money the university spends on teaching per student. Pepperdine did not receive a score in this entire category.

The website does not specify why WSJ could not evaluate Pepperdine’s resources score, but it explains that the data regarding university spending can be found on The Integrated Postsecondary Education Data System.

Unfortunately, Pepperdine’s page on IPEDS does not have data for this section, which may be the reason for its poor ranking. Providing this data could improve Pepperdine’s ranking significantly.

Pepperdine can also better its ranking by focusing on its engagement score — another category the University scored poorly on. The engagement score is evaluated on the students’ ability to think critically, apply interdisciplinary knowledge beyond classrooms and present new ways of thinking by reconsidering their own beliefs.

To improve, Pepperdine can implement a more problem-posing style of education in classes instead of the traditional banking model. These learning styles, developed by Brazilian educator Paulo Freire, explain different methods of learning in classrooms.

The banking model explains teaching is like a banking transaction — it is a one-way conversation. The role of the students is to regurgitate the information given by the professor. Freire argues this learning style limits students’ creativity, as they are fitting in a worldview controlled by the professor.

On the other hand, the problem-posing style describes a learning environment where both professors and students are the learners — both parties learn new worldviews by engaging in real-world discussions.

All parties contribute to the learning process, as they bring their own perspectives. Freire explains how this model encourages students to gain transferable knowledge and skills from a dynamic learning environment.

The banking model is more evident in K-12 education, as there is an emphasis on obtaining factual information.

However, in higher education, the problem-posing method should be put at a priority because it nurtures autonomous strengths such as intellectual agility — the ability to detect and evaluate multiple perspectives, digest changing factors and devise new solutions.

Classes in Elkins, such as Humanities General Education sequences, mainly adopt the banking model of education. This may be hindering students’ ability to develop critical thinking skills.

Instead, Pepperdine could reevaluate its curriculum — such as taking advantage of its student to faculty ratio — to adopt the problem-posing approach, even in GE classes. This new approach could potentially lead to the improvement of Pepperdine’s ranking overall.

College rankings are somewhat subjective and may not be a true representation of institutional prestige. People must view these rankings with a grain of salt. However, should Pepperdine continue to boast its top 50 position, they must also indicate how the list only evaluates national universities.

Liberal arts colleges, which successfully execute problem-posing methods in their curriculums, are not included on the list Pepperdine likes to boast.

Pepperdine should not just feed information in their favor. Marketing is one thing — but the reality is another. It is crucial to notify stakeholders so the Pepperdine community can continue to strive for academic excellence and a better position on the podium.