Lt. Chris Ramirez of the Los Angeles Police Department said officers reported to a shooting call at Bellmont High School. He said when they arrived, they located a few victims and the suspect without further incident.

A 12-year-old female student opened fire on her class at Sal Castro Middle School around 9 A.M. on Thursday morning.

A total of five people were injured, while two students were shot. One of the victims suffered from a gunshot wound to his head which left him in critical condition, but is now stable. The other student who was shot was hit in the wrist. The two of the victims injured, one student and one teacher, suffered shrapnel wounds.

The shooting took place in an elective class consisting of both middle and high school students.

Authorities said it is too early to be discussing the motive, but some parents were told that it was over a relationship dispute.

Parents were able to pick their children up beginning at 1:30 P.M., as they set up reunion stations outside the school and by softball fields, but classes were not cancelled, and school remain open for the rest of the week.

Typically schools will close down following a shooting, but parents are telling NewsWaves32 that they aren’t surprised classes are continuing and that school shootings are becoming all too normal.

“This is not new to me, this is normal to me,” said parent Luis Hernandez.

Police are still investigating where the student got the gun. 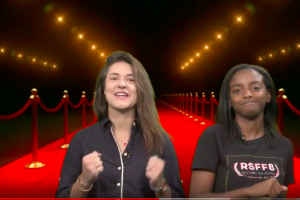 Lights, camera, ACTION! Join us on the red carpet as we honor the ninth year of the Reelstories Film Festival with nine fun facts...
Copyright 2013 Jupiter Premium Magazine Theme
Back to top