Jacob Bodden is an incoming freshman majoring in Computer Science for Business from Camarillo, California. He’s among the biggest freshman class in Pepperdine history, coming in just shy of a thousand people. Like everyone who attends Pepperdine, he has a diverse set of interests in both academics and hobbies.

Bodden is majoring in Computer Science Business, and said he is excited for his major because of the good job prospects going out of college and its alignment with his interests. He said he already knows two programming languages, C++ and Java, and he looks forward to learning more here at Pepperdine.

“I chose to come to Pepperdine not just for the view, but for the community itself,” Bodden said.

Bodden said he came to Pepperdine seeking not just a place to be, but for a place to belong. He said he loves the tight-knit community that his class has formed in the short time that they’ve been together and has especially enjoyed the camaraderie that his house, J. Pengilly, has shared during NSO. He said they have already climbed Point Dume and ran into the Pacific Ocean, and it doesn’t appear that the adventure will end anytime soon for him or his house.

Bodden said he enjoys both watching and participating in sports. He’s played baseball from the age of 5 and his favorite team is the Yankees. He also said he excels in the digital realm, being an amateur professional gamer for the popular video game Call of Duty. Santa Ana, Long Beach, Las Vegas and Atlanta are all places he has traveled to compete in video game tournaments.

“Some of my hobbies include baseball, which I used to play when I was little, and video games,” Bodden said.

When it comes to the college experience, Bodden said he is ready to get out of the house and see what adulthood and true independence actually feel like.

“I’m looking forward to figuring out what college really is, not just hearing about it but experiencing it myself,” he said. 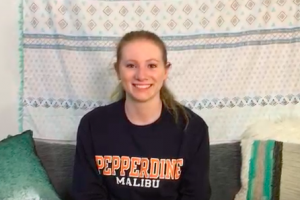 Photo by Ali Winiesdorffer For most first-year students, the first week at Pepperdine is hectic, filled with new people,...
Copyright 2013 Jupiter Premium Magazine Theme
Back to top