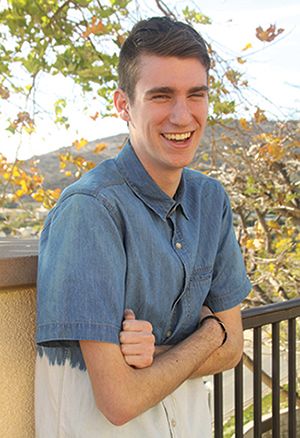 Hylton said he loves working for SGA and is excited to represent his class as president. As an openly gay student and member of SGA, Hylton said he is also interested in spreading awareness about the LGBT community. The Graphic interviewed him about his role in SGA and his experiences at Pepperdine.

Q: Why did you become president?

Q: What’s going to be the biggest difference between being senator and being president?

A: Now I do more reporting to the E-Board, like monthly reports. I do more of the organizing. We hadn’t really had a head position, we were all just one big team. Now, I’m keeping us more on track; being the motivator.

Q: What’s your biggest goal as an SGA representative?

So they’re going to present their two sides. It’ll be a convo event to talk about how this is a hushed event on campus. It’s not going to be about which side is right, but more like, as Christians how do we deal with the fact that we have different opinions on it? It’s been a lot of work, but I’m really excited about it. It won’t be as big as Veritas Forum but almost. We’re using Elkins and PLC with a live feed. So as long as SGA approves it, we’re tabling the week before, passing out T-shirts. It’s kind of funny because for my COM 180 policy speech I talked about doing something like this. And now it’s crazy because I’m actually doing it because of SGA.

Q: Why did you join SGA this year?

A: I was looking to get involved on campus, but I wanted something that really mattered. I really didn’t know what I was going to do and I was looking for something. I’m part of Posse, and so is [Executive Vice President] Sarah [Houston], and I was talking to her about it, so it just aligned. I thought this would be fun to get in to.

Q: What’s your favorite part about being in SGA?

A: My favorite part is that I feel like I can actually do something; it really does matter. We should always be open to all students’ beliefs, but SGA is seen as the mediator between the students and administration. We’ve actually done stuff that helps the student body and that’s really cool.

Q: What’s the most impactful moment you’ve had with SGA?

A: Pepperdine has tried to establish off-campus meal points year after year, and I saw that last step. Last year, I had no idea what SGA was doing, but SGA really can do a lot. Also, getting to know students through town halls who I didn’t even know went to Pepperdine.

Q: What’s it like being a representative for a scattered class?

A: It’s interesting, but at the same time because [the sophomores] stayed on campus, I got to know more people. They want more stuff to do and they have more opinions. I’m meeting people anyway, and now I’m president and I can hear about that.

Q: What do you perceive being the biggest obstacle this semester?

A: I think it’ll be most difficult for SGA as a whole to stay motivated. It’s natural for students second semester to lose that motivation. We were so productive first semester, and it’s going to be a challenge to live up to that second semester. I think we really do want to make sure we do as much work – if not more – from the first semester, but because first semester was such a big time for us it might be difficult. It’s just a matter of staying focused.

Q: Do you want to continue with SGA in the future?

A: I applied for [Housing and Residence Life], so it depends on that decision. But if I get RA for next year, I do want to go back to SGA senior year as executive. If I don’t get RA, I want to try to go for exec for next year.

Q: How did you end up at Pepperdine?

A: I’m from DC and I’m a part of Posse. I was looking at all the schools that Posse offered, and I wasn’t sure because I want to go into music business, and none of them would help me. Then I saw Pepperdine. I had never heard of it, but I looked at it more and I decided it wasn’t the school for me. Then that Reach Out stuff happened. Reach Out is the LGBT club that was trying to get recognized and it got shut down. It got really bad publicity and I didn’t know if I wanted to go to a school where I’m not comfortable. So I made a decision because Posse wants us to go out and advocate for change. So I knew this would be my chance, I had gone to Christian schools in the past, so I was used to the possibility of judgment, so I chose Pepperdine because I thought I might be able to get involved and advocate, which is what I’m doing now. Plus, I’d always wanted to go to school in California and it all just fell into place.

Q: How has your experience been as a gay student?

A: It hasn’t been that bad. I feel like the publicity Reach Out got was really unfair to Pepperdine just because I feel like the student body and the professors are very accepting. It just came down to politics, and I’m not even offended by that. We are a religious school, and we can’t just assume that we can have a group like that on campus. I’ve never personally been that affected or judged. I’m sure people say things behind my back, but that sort of comes with being gay. On campus though, I’ve had an immense amount of support. The fact I’m working with the Chaplain’s Office to do an event like this, I think it just shows Pepperdine is very open and very loving and it’s just the stereotype from the bad publicity it got.

A: I’m an advertising major. I would love to be part of a marketing team for an artist or a record label. My dream is to work for a record label company, so making album art, single art. I’m also interested in administration. That’s why I’m involved in SGA and HRL. I like that aspect of administrative work. If I can be both behind the computer and in the field talking to people, I think that’ll be good.

Q: Why did you stay on campus this year instead of going abroad?

A: For my Posse, you can only go abroad if your major requires it. You’re involved in mentorship your first two years, so your second year is kind of critical. I don’t mind it. I’m going abroad to Argentina this summer for the Spanish completion, which is the first three levels, which will be really convenient.

A: The lack of diversity. I feel like Pepperdine wants diversity, but we are such a traditional school and it’s difficult to change.

A: My favorite part is probably the professors and just the community in general, as cliche as that sounds, especially coming from DC, which is very fast-paced and you have to question people’s motives. Everyone really means well here; professors really do want to get to know you. I thought I was going to go to a huge state school and now I’m here and professors know me. The network is great. 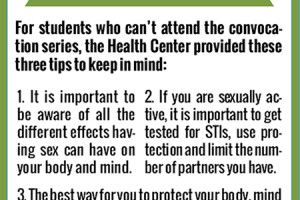 Sex can be a topic that is easily overlooked or dismissed, but Sexually Transmitted Infections or STIs, present a problem...
Copyright 2013 Jupiter Premium Magazine Theme
Back to top