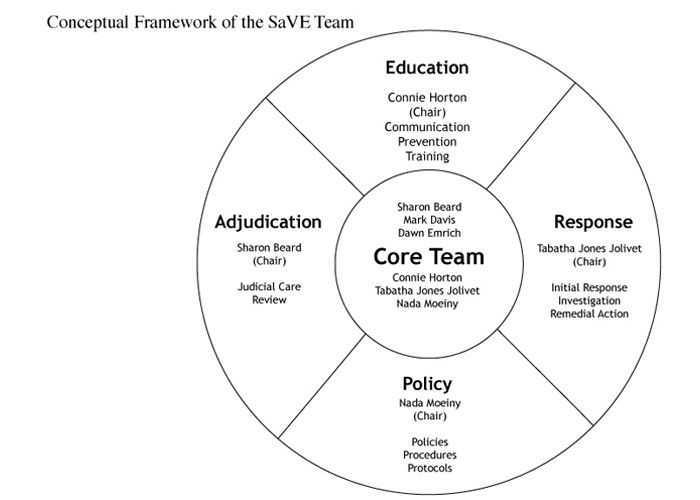 Associate Dean of Student Affairs Tabatha Jones Jolivet (’97) pointed to a painting by a former student in her office at the Career Center. “Justice” is what was rendered in bright purple on the board, and it’s the word that encapsulates Jolivet’s entire ethos.

This ethos is precisely why Jolivet is the one you want on your side if you’ve experienced some type of sexual assault as a Pepperdine student.

Jolivet is a Pepperdine alumna, a Pepperdine professor and a Pepperdine mom. Most recently, she’s the chair of the SaVE Team, a new group of administrative responders tasked with addressing all sexual assault-related matters on campus. The goal is ambitious yet simple: to reduce and eliminate any form of sexual misconduct.

The Campus Sexual Violence Elimination (SaVE) Act is a piece of legislation that enhanced and updated the Jeanne Clery Act. Re-enacted in 2014, the Campus SaVE Act further enhances a campus’s role in addressing sexual violence through more transparency, accountability and education.

The Student Care Team, previously based out of Student Affairs, was responsible for Seaver’s needs for any concerns facing students, including sexual assault, loss of relatives or personal issues.

“We are now saying let’s leverage the resources of that [Student Care] team across the institution, so that if you are a student at Seaver or a student at GSEP or School of Public Policy, etc., that you are going to get the same standard of care, and we are going to be thinking big picture about how to create a climate that really reflects our values as an institution,” Jolivet said. “We’re a Christian university, after all … If anybody should be leading in that conversation, it should be us.”

In the event of a report of sexual assault, as chair, Jolivet would convene members of the core team and respective representatives across all five schools. Representatives will vary dependent upon the population of the school and other factors, but as of now, every school has at least two representatives.

“There is such a modality in higher education to do things in silos and not collaboration,” Jolivet said of the SaVE Team’s intention to comprise personnel from key areas within the university.

Acting as a transdisciplinary team, or a partner to the university’s various resources in responding to sexual misconduct, the group sticks with a case until it is finished, whether that means by adjudication or creating a new policy.

“So not just responding to an incident, but also thinking, ‘What can we learn from this incident and how can we take that to the institutional level to rethink, oh maybe we need to have a policy about this?’” Jolivet said.

Just as importantly in Jolivet’s scheme is learning from sexual assault responses and changing some institutional conditions that schools don’t know existed.

“Ensuring it’s thoroughly investigated and responding in ways that are fair and appropriate that also change the climate so that people can thrive at Pepperdine,” Jolivet said.

Still in the developing stages, their first and biggest aim is to adequately train members of the team. The entire team met officially in February for a roll-out meeting. They will continue to meet as a whole about once a month, but subcommittees may assemble more or less frequently.

“One of the first things we want to do is to really focus on and expand education. Connie Horton and her team have been working on the Step Up! program, that’s very much connected to the things that we’re thinking about as part of the SaVE Team,” Jolivet said.

Horton, who is chair of the education subcommittee, will work at prevention, training and communication through all aspects of the campus. One concrete result of the SaVE Team already is the Step Up! campaign, which targets bystander intervention, and the LiveSafe App, which allows anonymous tips and faster emergency response available to all members of the community.

“People get paralyzed in what they know is the right thing to do, they don’t know how to actually overcome the stigma or the feeling of frozenness, etc., to actually step up and intervene as a bystander,” Jolivet said of Step Up!, championed by DPS and Office of Insurance and Risk Management.

In essence, the SaVE Team is all about enhancing the conversation at Pepperdine, Jolivet said from behind her desk in her office, “Because it’s who we are as an institution.”

Get Rid of the 'Rich Kid' Rep 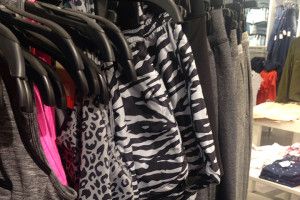 Photo by Shayla Girardin Making time to workout can be challenging and actually getting out the door is a struggle. For my fellow...
Copyright 2013 Jupiter Premium Magazine Theme
Back to top