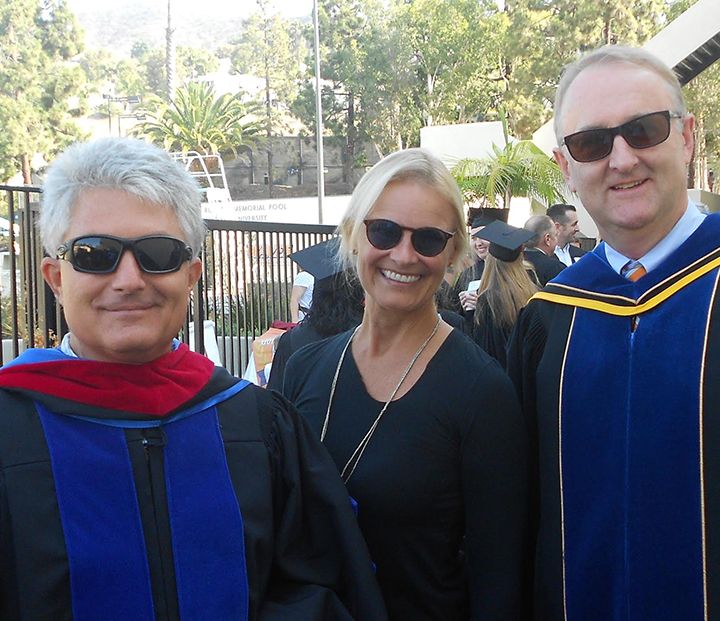 The institute is evolving from what was the Center for Entertainment, Media and Culture. Linehan said the center was founded in 2009 under the direction of Craig Detweiler. Its mission was to create entertainment for the “(un)common good,” according to Linehan. The center assembled conferences, screenings and networking events to “educate future entertainers, mentor tomorrow’s media makers and enrich our collective culture,” Linehan said. The newly formed institute is led by Executive Director John Mooney, Creative Director Craig Detweiler and Linehan.

Detweiler said the institute is an expansion of an ongoing vision that both Pepperdine’s President Benton and current and past provosts have had for the past 7 years.

“The university has become increasingly aware of its surroundings.” Detweiler said. “[It] has figured out ways to lower the barrier of entry to our influential neighbors in the entertainment business.”

Pepperdine has discovered how many alumni are working in media and entertainment, Detweiler said.

“The core calling of George Pepperdine was to create ethical businesspeople to transform the world,” Detweiler said. “And it just so happens that the most influential and prevalent industry in this town is entertainment.”According to Mooney, the university’s history is motivated by faculty interests and their contact with students.

With entertainment being such a big part of Southern California culture, particularly Los Angeles, Mooney said a lot of students come to this university hoping to find a role in the area of entertainment and media. It’s an industry that will allow students to make a difference in the world, because entertainment and media are powerful platforms for people to share their message, story and values, he said.

Mooney said the new Institute is modeled after the Institute for Design at Stanford University. Stanford’s institute creates projects for students from different schools to come together and work on a break from the traditional model of education, he said. The role of the Institute for Design at Stanford is to help faculty and schools work together to build on courses and extracurricular learning experiences. Like Stanford’s institute, one goal is to get a variety of students to collaborate; for instance, a Journalism student, a Theatre student and a Marketing and Finance student could all work together, he said.

According to Detweiler, student interests are increasingly interdisciplinary and multidisciplinary. They are trying to create an institute that would act like an umbrella, incorporating all of the multiple skills that are necessary in today’s industry of media and entertainment.

The next step, according to Mooney, is to offer for-credit courses that will prepare students to get better internships in the short term, which will help get them better jobs in the long term. Their mission is to better educate students to be successful in a continuously evolving world of entertainment — and that is something that they have to be aware of, he said.

Mooney said students may or may not want employment at large companies and that they may want to do work on their own as “creative ntrepreneurs.”

For instance, Mooney said, maybe journalists don’t want to work for traditional entertainment and media outlets; perhaps they want to tell their own story on their own terms.

“So creative entrepreneurs; the notion of giving students the skills, capabilities, competencies, confidence, courage and the commitment to embrace the possibility that they can tell their own story on their own terms on an entirely new platform,” Mooney said.

Linehan said she hopes the new institute will create a compelling message that is attractive to alumni and people, an institute that they will want to be a part of and want to help make a vision come true. With donations and funds, they could create a source that brings in professors that will continue to enhance the quality of the school.

Mooney said the best indicator of success for the institute would be that if in 5 years, he saw graduates being sought after by the “coolest” firms in entertainment. He hopes that graduates will only take those jobs if they decided themselves that that is what they truly want to do. Some, however, may say “no, thank you” because of another offer or because they prefer to work on their own and be a “creative entrepreneur.”

Mooney also said he hopes that in 10 years graduates will have made a difference in the media and entertainment industry by telling compelling stories or by enabling others to tell their stories.

Detweiler said his hope for the institute is that “Pepperdine students, alumni and professors will be equipped and empowered to tell the most transformative stories possible across all kinds of traditional and emerging media.”

According to Mooney, there will be an official launch event sometime in October announcing the start of the institute and giving information about scheduling and enrollment.