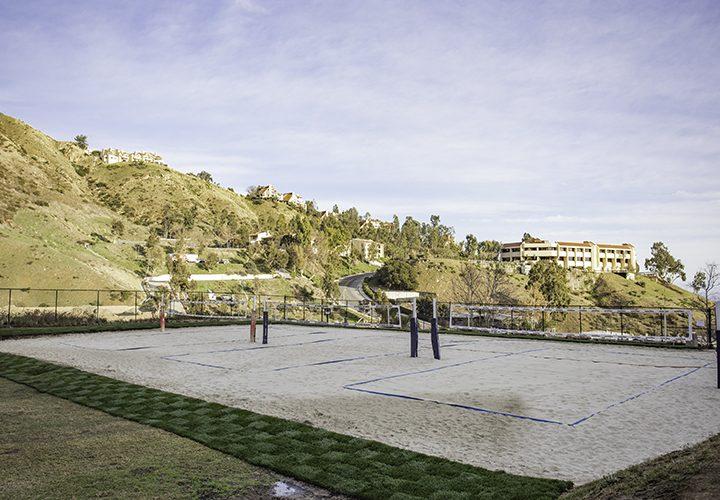 The Pepperdine Beach Volleyball team gained three new practice courts near Drescher campus to practice on for the 2020-2021 season, as pictured Feb. 13. The team used to volley on the Zuma Beach courts, but due to COVID-19 regulations, they had to adapt and build new facilities on campus. Photo by Ryan Brinkman

Six months ago, the Pepperdine Women’s Beach Volleyball team was unsure if it would have a place to practice.

Ever since Pepperdine launched its women’s beach volleyball program in 2011, the team has practiced and played its home matches at Zuma Beach, about 10 minutes away from campus. When LA County removed all volleyball nets from the beaches in efforts to manage the spread of COVID-19, the program had constructed an innovative plan.

Despite having two recreational sand volleyball courts located between first-year housing dorms, the program needed at least three collegiate level courts for its season. The administration and coaches put their heads together and drafted a plan to use the space in Marie Canyon, which sits right above the new intramural field, to build the courts. Once this space was approved, the program needed to find the funds to make it possible.

Pepperdine Athletics Director Steve Potts said that the Women’s Beach Volleyball team was fortunate enough to have a significant gift from one of the parents of a player and few more donations from additional parents to raise funds needed for the courts to be built. After a six-week building process, three sand courts were officially completed.

Senior beach volleyball player Brooke Bauer said while the new courts are exciting, their mountainous location creates a different playing experience than what the team is used to at Zuma Beach.

“Playing at the beach is pretty different from playing on man-made courts,” Bauer said. “As a team, we have been getting ourselves acclimated to the new wind speeds, wind directions, and the texture of new sand, but ultimately the courts aren’t too drastically different from what we are used to playing on.”

Bauer said the team plans to take it in stride and embrace the conditions by strategically utilizing the natural elements for its advantage during home matches.

When asked about the decision to construct the sand courts on campus, Potts said, “It was pretty simple; we didn’t have a place to practice or play.”

Potts said COVID-19 put the program’s dream of building on-campus courts into motion, but once Zuma Beach opens back up, they will return to playing matches there.

“Once the team is no longer using these courts when things go back to normal in time, they will be open for the recreational use of students, with permission from the university and campus rec,” Potts said.

Additionally, Potts said he hopes to find a space on campus to build five courts, restrooms and seating for fans to support the program.

Players, especially graduating seniors like Bauer, are excited to play on-campus as they will be more connected than ever to Pepperdine while they play their matches.

“It’s both nostalgic and super cool that we get to finish it at Pepperdine, literally.”, Bauer said.

The Women’s Beach Volleyball team’s morale has entirely shifted, as there was once a point when it was uncertain if its season would happen. Now, the team is excited to compete on-campus, for the first time in Pepperdine History.

“We are so grateful, that’s the best word I can use,” Bauer said.

There has not been an official name assigned to the sand volleyball courts, but the Waves are eager to host their first match on these courts Sunday, Feb. 28, against Stanford. 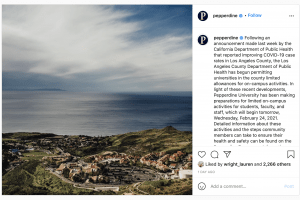 Screenshot by Makena Huey Social media is at the forefront following Pepperdine’s Tuesday, Feb. 23 announcement of a partial...
Copyright 2013 Jupiter Premium Magazine Theme
Back to top