In The Midst of Tragedy / Perspectives / Special Publications / November 25, 2018 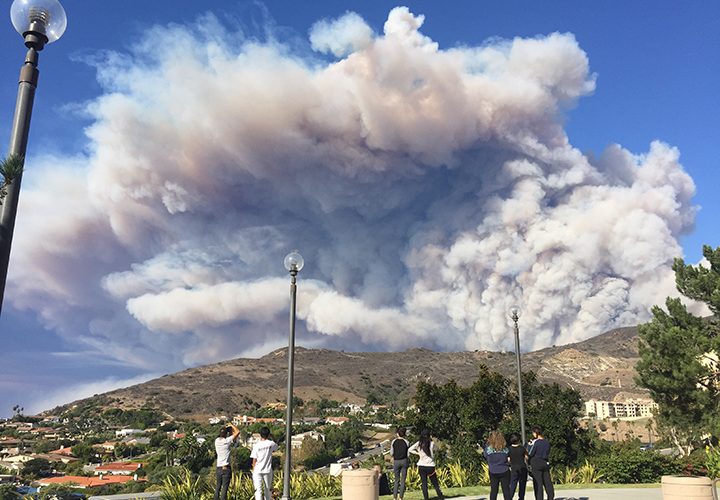 The week of Nov. 5 was catastrophic. Even this word does not fully encapsulate what transpired or how the Pepperdine community has wrestled with the tragedies it has endured.

Before students, faculty, staff and all of the Pepperdine community could fully process the aftermath of the Borderline shooting and the loss of freshman Alaina Housley, students awoke from their slumber confronted with the news to evacuate and relocate to Firestone Fieldhouse or the Tyler Campus Center.

While the Woolsey Fire raged on and students received many updates from Pepperdine throughout Friday, criticism and misinformation spread like the wildfire ravaging Malibu. In an age of constant information, the experience lay bare how far we have to go to keep up with it. Media literacy won’t save us, but sure, it can certainly help. However, what will are the abstractions of trust and faith that demand more from us during these times.

For most, the gravity of what was to come — loss of houses, and even what can now be viewed as the minor inconveniences of revised class schedules — was mitigated by the camp-like atmosphere among students: pillows and blankets set up in the gym, even a tent (laudable, indeed) for those who fully thought through the evacuation notice and grabbed the essentials.

Throw in clusters of students playing volleyball and basketball and video footage of students singing in the cafeteria, and there you have something unmistakably Pepperdine about the reaction to all this—the remarkable ability to forge connection and retain more than a modicum of positivity in the midst of tragedy.

Throughout the day, tweets with erroneous information about the fire, the school and law enforcement’s orders spread on Twitter. Among these tweets was the false “news” that Pepperdine University’s roof was on fire to reports that the campus was evacuating. The spread of information was not limited to the peanut gallery of Twitter, however, as KTLA news misreported (and later issued a correction) that students were being ordered by law enforcement to leave campus. The reports, understandably, were alarming.

Many individuals took to social media, some with a connection to the university, others merely strangers, to voice their concern about the fire and add their two cents about Pepperdine’s shelter-in-place policy. Pepperdine’s shelter-in-place policy elicited the most criticism the past several days, and a host of articles from news outlets were quick to report on this criticism and the University’s response.

To provide some historical background, the University, in conjunction with the Los Angeles County Fire Department, established the shelter-in-place protocol after the 1985 fire. The school, as well as the LA Fire Department, have safely followed this protocol and protected students through the 1993 Old Topanga fire, Calabasas fire in 1996, and Canyon and Corral fires in 2007.

Concern for the safety of this option was evident, from the vociferous debate that followed on social media and even conversation among Pepperdine students. It seemed that some people were unsure about what the shelter-in-place policy entailed, possibly due to their own lack of information (and subsequent spreading of misinformation) symptomatic of personal anxieties and fears.

The most worrisome issue with this debate derives not from the question of whether there are safer or more equitable options than the shelter-in-place option, but from the suggestion that the university, especially one as student-focused as Pepperdine, would put their students’ lives at risk or compromise their integrity by doing anything but offer the best for its students.

This is, after all, the same university where faculty and staff convene in the cafeteria before finals to serve students a late-night breakfast; the same university that welcomes students into its arms with, yes, a barrage of overly excited students at NSO but also into the house of the president, which would be bookended their senior year.

Professors offered their houses, gave their personal phone numbers, wrote lengthy and thoughtful emails, and the community was brought together through this kindness that somehow grows and permeates in the midst of tragedy. But this is not time to demonize those that spread misinformation and criticism either. The trend of “fake news” in the genuine (and not Donald Trump) sense, is endemic in our digital age, it just became more pronounced because it is an issue and most of all a place that is close to us.

Time and time again, George Pepperdine’s motto “Freely ye received, freely give” is invoked to capitalize on its relationship to some aspect about Pepperdine—pejorative or not. Perhaps this time, we can heed the wisdom in this motto that is plastered on the wall as we make our way out of the cafeteria. It’s not a hollow maxim, but one we should undertake in order to fully give back to the University that has given so much to us. What we gave Pepperdine is our life, and what we received in return for our trust, love, faith, and strength, is just that. 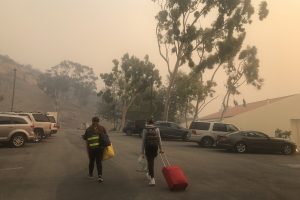 The Woolsey Fire burned 96,949 acres, destroyed approximately 1500 structures, and became one of the most destructive and costliest...
Copyright 2018 Pepperdine Graphic
Back to top