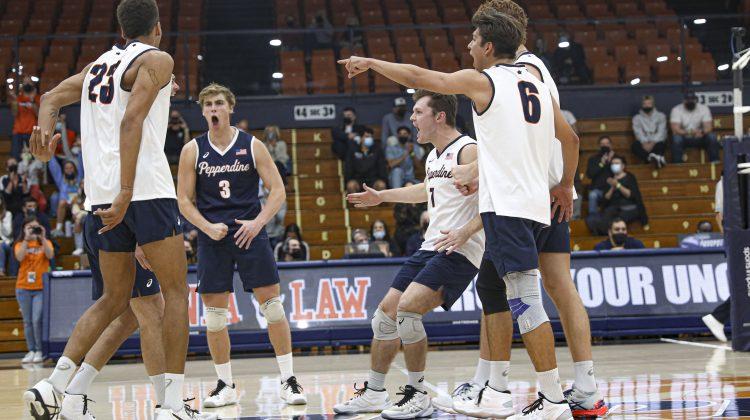 Pepperdine Men’s Volleyball celebrates a point during the match versus Lewis on Jan. 28. The team is currently No. 2 in the MPSF standings. Photo by Ryan Bough

It was a packed Firestone Fieldhouse on Friday night. Drake’s KMT blasted through the speakers as the players went through their pregame routine.

Donning their white and navy-blue uniforms, the crowd showered the No. 2 Pepperdine Men’s Volleyball team (4-1) with cheers as the starting lineups were announced. Hoping to bounce back from their first loss of the season against UC Santa Barbara, the Waves responded with a sweep of No. 7 Lewis University (4-2).

“I think the Santa Barbara match was tough because I don’t think we responded well to a tough match,” graduate student outsider hitter Spencer Wickens said. “I think we realized there’s going to be a lot of tough matches this year. So we just gotta keep chugging and keep pushing and not get upset at ourselves for making mistakes because we’re going to play good teams.”

Both Lewis and Pepperdine made the NCAA tournament last year, and Lewis is the first ranked opponent Pepperdine has faced in the early parts of the season. The record against Lewis was tied at 3-3 before the Jan. 28 matchup. In the last meeting back in 2019, the Waves beat the Flyers in four sets.

“It was a lot of focus on [Lewis graduate student middle blocker Tyler] Mitchem in the middle and the block surrounding him,” graduate student outside hitter Jaylen Jasper said. “So, we had to replicate his attack in practice as best we could, and I think we had some success.”

The Waves came out firing in the first set. A Jasper kill jumpstarted a 4-1 run. After a play that saw four rallies and the ball almost hitting the ceiling, Jasper leaped forward and spiked the ball emphatically on the right side.

The two teams traded points as Lewis tried to claw back into the game, but a double block by graduate student outside hitter Austin Wilmot and sophomore setter Bryce Dvorak set the tone. Dvorak would convert on an ace and Lewis redshirt junior outside hitter Cole Brillhart committed a costly attack error, increasing the Waves lead to 10-6.

“You know they want to run the middle of the court,” Head Coach David Hunt said. “The tough part was because we played so poorly on Friday that it was just a lot about us and it was about playing better volleyball. We knew generally what they wanted to but we wanted to clean up a lot of stuff that we were doing.”

The Waves scored 16 kills in the first set. At that point of the game, Lewis had already committed six errors, compared to only four errors from Pepperdine. Pepperdine’s game plan was working thus far, holding Mitchem to only four kills on a .67% clip.

The Waves opened the floodgates after a kill from redshirt sophomore opposite Jacob Steele. A combined effort on a block from Steele and sophomore middle blocker Anderson Fuller increased the score at 11-7 in the second set. The Waves charged up the offense with a 6-3 run and expanded their lead at 17-10 in the second set.

Lewis redshirt sophomore opposite hitter John Davis was initially credited with a point with the score at 20-14, but Dvorak signaled the ball was out of bounds to the ref and twirled his fingers, motioning Hunt to challenge the call. The refs huddled over the monitor at center court, and after reviewing the play, Dvorak’s instincts were proven correct and the call was reversed, giving the point to the Waves with the score at 20-14 in the second set.

“We just started playing better volleyball,” Hunt said. “We knew what they wanted to do block defense wise generally, then it was ‘Alright what are they going to do on our hitters specifically.’ At that point, we were like 12-for-13 with one error and they were hitting like 900 [percent]. It’s just Bryce [Dvorak] putting the ball up for guys and making it physical and hitting the ball hard.”

The Waves managed the second set through their scorching offense. The Waves won the second set 25-20 while having a hitting percentage at .625 and converting on 17 kills.

Down two sets with a fear of getting swept, the Flyers came out with more energy in the third set. Lewis junior setter Kevin Kauling scored on an attack error after Jasper failed to convert on a kill attempt, prompting the Flyers bench to chant, “You’re wide open!”

Jasper responded to the taunts with back-to-back kills, both assisted by Dvorak.

“This past week in practice I really had to convince myself that it’s okay to mess up,” Jasper said. “It’s okay to make mistakes and I just felt a lot more comfortable on the court even after I made mistakes, so I think that’s a big change for me.”

The Flyers went on a 5-0 run, but the Waves responded on a 4-0 run themselves, with the score at 12-9 favoring the Flyers. Lewis freshman middle blocker Isaac Benka mistimed his jump on a kill attempt and gave the Waves an easy point.

With the score at 16-13, an ace from Jasper started a comeback attempt. Graduate student outside hitter Alex Gettinger scored on a service ace, tying the score at 17 apiece.

Since their comeback, there were four ties in a competitive third set. After a total of 11 rallies which saw a variety of blocks and digs, the Waves scored on an attack error, but the call was overturned.

Wilmot was exhausted, his shoulders hunched over, and his hands resting on his shorts.

With the Waves completely taking control of the game at 23-21, Jasper and Wilmot combined on a block, and immediately flexed their arms in celebration.

A kill from Wickens got the Waves the match point, and now, with the fans at Firestone Fieldhouse on their feet, Steele put the game away for good, assisted by Wickens.

“It is such a nice feeling,” Jasper said. “Like [Lewis] made some amazing plays and I think that just makes it all the more satisfying, and especially just seeing the things we work on in practice and the things that our coaches tell us to focus on, just coming together. It makes it really enjoyable to be out there.”

The Waves will have another chance against the Gauchos on Feb. 4 in Santa Barbara.