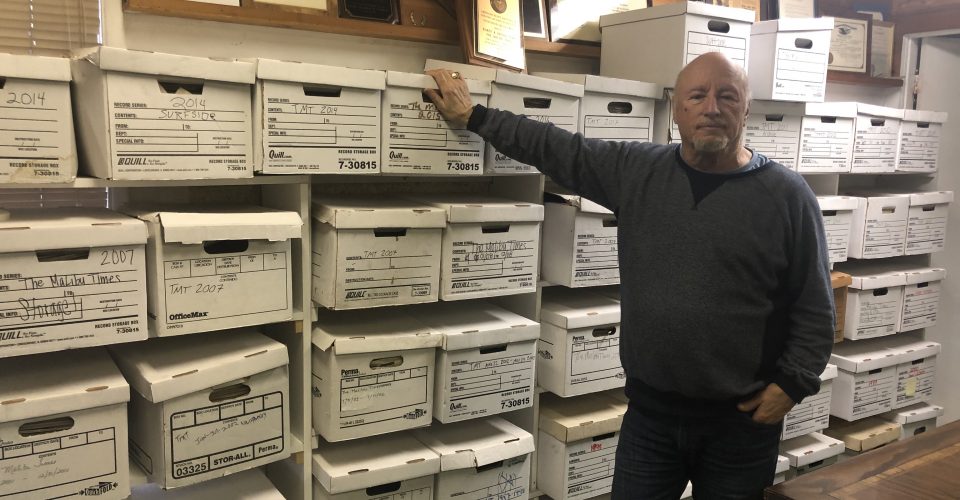 In a small office building tucked along Los Flores Canyon Road, you can find the Malibu Times. Behind its doors, following a greeting from a friendly little Yorkie named Studly, you can also find Arnold J. York, the man behind the paper and a well-known figure in Malibu for over 40 years.

York has served as the publisher for the Malibu Times since 1987. He and his wife Karen bought the paper from its founder, Reeves Templeman. York, who had been working as a trial lawyer for 20 years, said he was burnt out and looking for a change of pace. When his wife approached him with the knowledge that the paper was up for sale, they took the plunge.

Born in Brooklyn in 1937, York said he got his first taste of the newspaper business as a paperboy for the Brooklyn Eagle. York said he has always been a news junkie, and as a high school student, he had an Honors English teacher who would have students collect the New York dailies and compare the same story as covered in all of them.

“Down deep somewhere, I guess the message sunk in,” York said.

As a law student at the University of California Los Angeles, York said he was heavily involved, serving as the chairman of the student body government, chairman of the publications board and as graduate student president.

When he met his wife Karen at UCLA, she was finishing up her undergraduate degree there. The two met through her boyfriend at the time, who according to York, made a big mistake by leaving Karen behind to go to graduate school. His loss was York’s gain. The two have been married for over 60 years and have three children and three grandchildren.

Having grown up in New York, he said he had his first encounter with California when he served as a navy officer and passed through on the way to Pearl Harbor. Following his marriage to Karen, they decided to leave the city for the small coastal comfort of Malibu.

“When we first visited here, it just felt like home,” York said.

York has lived in Malibu since 1976, and therefore has seen the ways the city has changed. When he first came to Malibu 43 years ago, it had a small town feeling with a lot of middle-class people – today York finds that is no longer the case.

He noted that the most obvious change is the transition of Malibu into what he calls “a high-end make-believe.” What was once a small town for people in the film industry and everyday folk has become something entirely different, as a result of much of the fame Malibu has garnered. With that allure of the seaside escape came more and more money and less of that small town feel he said he remembers so fondly.

While Malibu may have lost some of its quaintness, York said he continues to work hard to ensure the paper maintains its devotion to the community and keeping people connected. Few people are as connected in the Malibu community as York.

“We live in a metropolitan area, but it’s still a small town and you get to know the people after some 30 years,” York said. “When you run a small community paper, you have to understand the nuances of the town, you have to feel the limits, and Karen and I probably know that best.”

Knowing the community is made easier by both York and Karen’s high level of involvement. If there is an event going on in Malibu, it’s likely you’ll find both Yorks in attendance.

“Like any publisher of a small town paper, we’re involved in everything,” York said.

Karen is on the board of the film society and the Jewish center, and York has run the business round table for over 10 years.

He touted the importance of locals running a community paper and said he believes publishers who are engrained in the community are essential for running a paper like the Malibu Times. He added that often, outside chains can’t accomplish the same work.

“Part of what we do is to be part of that and pick up what is going on,” York said. “Around town, people talk to you. They tell you things and that’s important.”

Running a paper in Malibu, York said, is made easier by his background as a lawyer. He explained how there are often legal disputes in Malibu which the paper will cover, and his time spent as a lawyer can add a more experienced touch to the reporting.

“This is a very litigious town,” York said. “Everybody has a lawyer — your gardener has a lawyer.”

The pace of his life as a lawyer versus now looks very different. While York describes himself as someone who can’t sit still, he has a more relaxed approach to his work in recent years.

He said he works about five days a week with the paper. He always reads at lunch to stay up to date – but avoids social media. York is both the editor and publisher, and he writes a column each week. He tries to read all the stories that go into the paper and runs every editorial meeting. One of the most important things for York is making sure every voice in the community is reflected in each issue.

His continued commitment to interacting with the community and being witness to the ways in which Malibu has evolved means York has a greater insight into the effects each story will have on the city.

“I’ve been here the longest and I know the town and the sensibilities,” York said.

When it comes to those sensibilities, he said he has had to make difficult decisions for some stories involving people in Malibu. York is mindful of the community and how a story may possibly impact a family living here.

However, when he feels as though a story may not be for the Times, but has bigger potential elsewhere, he said he works with those he has gotten to know through years of being the newspaper business.

“I have called other papers, like The New York Times, when certain things seem to be larger stories and I want to see them get a national platform,” York said.

While York said he is careful to ensure the paper maintains its fairness and objectivity, when it comes to matters like politics, York isn’t afraid to voice his opinion and has no problem being contentious.

“If you want to be loved, you certainly don’t want to be the publisher of a newspaper,” York said.

And of course, not everyone will always support stories that the paper puts out. However, York said he welcomes any criticism.

“If you send us a critical letter, we’d be happy to run it,” York said.

While York and the Times seem to be mutually exclusive, his time as the publisher will soon come to an end. York said he and his wife Karen are is in the process of looking for a buyer for the paper. York hopes to find a local buyer who will continue on with local journalism.

Looking back on his time as publisher, he said he is proud of the work the paper has done and of that decision he and his wife made 31 years ago.

“It’s probably the most interesting thing I have ever done in my life,” York said. 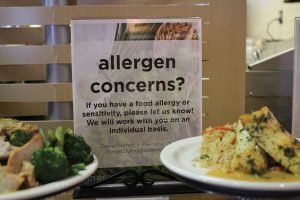 Photos by Susannah GallupMidway through the spring 2019 semester, Waves Cafe posted a new sign at its entrance that informed...
Copyright 2013 Jupiter Premium Magazine Theme
Back to top