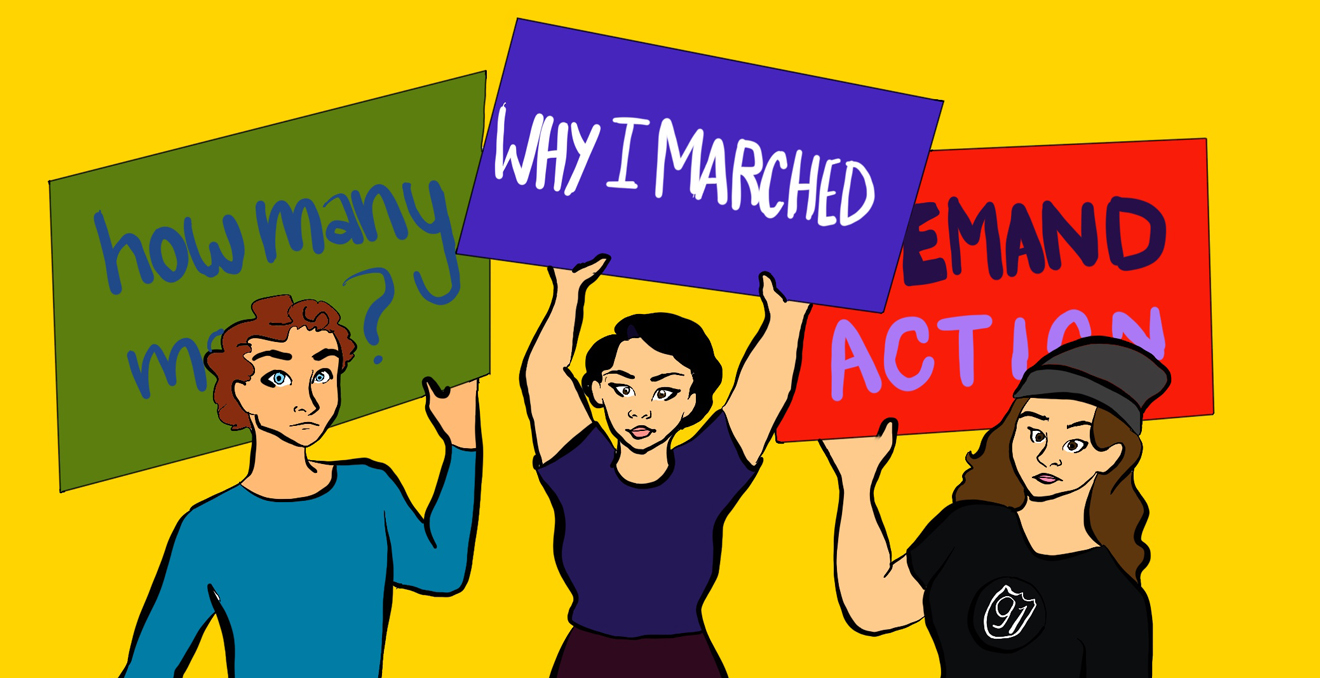 My cousin, Emily, is a survivor of the Route 91 Harvest Country Festival massacre in Las Vegas on Oct 1, 2017. She was one of the lucky ones who escaped the ordeal with no physical injuries. But as we walked together on March 24 in Los Angeles during the March For Our Lives event, the events of six months ago were still taking their toll. Between laughter and talking, pointing out the clever signs and feeling great about the turnout, there were also moments of grief and fear. Tears flowed freely. We stood with her as we walked, and I was honored to stand by my family’s side.

But Emily isn’t the only reason why I marched.

I’m from Colorado. Gun violence is infamous in my state. One of my earliest memories in elementary school is doing a “lockdown” drill under the desks of my fourth-grade classroom. Columbine High School is an hour away from where I went to school. The Aurora Century 16 Theater where the 2012 shooting took place is only a thirty-minute drive from there.

But this isn’t just my school or even my state. It’s everywhere.

The Brady Campaign is a non-profit organization dedicated to reducing gun violence in America. According to their website, over 17,000 children are victims of being shot. Those statistics include suicides, but the large majority of the shootings are either murders or “an attack.”

And even if saying a suicide shouldn’t be counted among gun violence, then the question stills remains: Should people who have a history of mental health issues or suicidal tendencies have access to deadly weapons? Does the high rate of suicides amongst gun-related crimes lessen the blow of the statistic, or does it strengthen it?

And now, Parkland. This advocacy has gained national attention but comes after reports of gun-related violence among Chicago suburbs have gone on for years, and after many men and women have been shot and killed by the police force. Now the young students of a Florida high school no one ever had heard of before are leading the charge in what may be the biggest call to action since the days of the Vietnam War protests.

My thoughts are this: Since my generation has been old enough to remember, for as long as my little brother Dylan has been alive, before our baby cousin Stevie was even old enough for daycare, there has been a gun problem in America. Students have gone through active shooter drills, families have been torn apart, and when it came time for a conversation, people were so quick to get defensive that until now, a serious conversation about the gun violence in this country had but a fleeting life expectancy.

This time feels different. But now that the March is over, what are Americans to do?

We must keep talking. Regardless of what side people may be on, more guns or fewer guns, better registration or more armed security, nothing will change unless Americans insist on a conversation at a personal, state and federal level. The need for change is undeniable now, and Americans must continue this discussion until such change is found.

Pepperdine students can still get involved with other advocacy events courtesy of the Parkland students. Up next is The Town Hall Project, which calls for representatives to speak with their constituents about gun violence. Senator Kamala Harris is holding a Town Hall in Long Beach on Saturday, April 6 for those interested in attending.

Being active and talking to elected representatives at a national, state and local level is crucial. People who engage in dialogue about gun control need to stay informed, and if someone gets into a debate with another person with a different viewpoint, they must stay with the facts and avoid getting emotional.

Create environments for honest and factual discourse, with evidence to back up findings, and don’t stop talking.