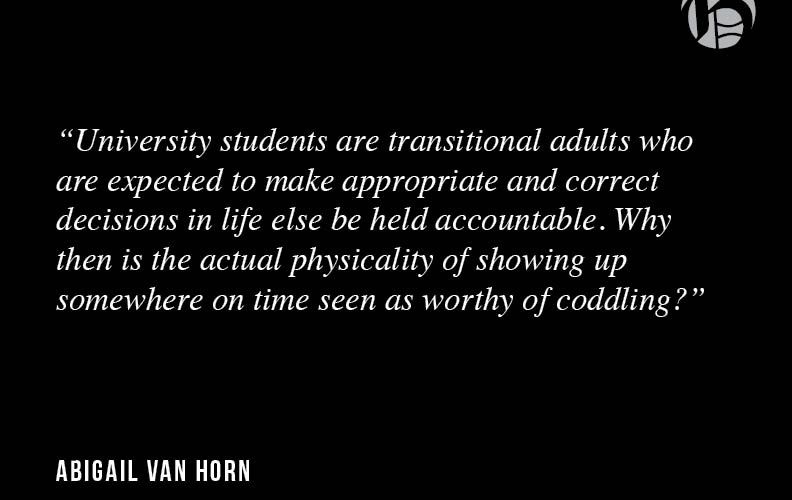 To me, syllabus day is important for two reasons. First is to claim a territorial dibs on whatever desk I deem worthy and second is to find out how many days of class I can miss without hurting my grade. Jokes aside, mandatory attendance is a form of coddling that I find patronizing and unnecessary. Students should be expected to actually go to school (gasp!) because they are, well, students and not because of an attendance grade hovering over their heads.

I understand that classroom attendance is important and that some teachers see creating mandates as means to supporting the [individual] student’s progress while maintaining enough voices to support an enriching class discussion and learning environment [the collective]. However, this assumes an incompetence on the part of the student populace.

Even without the mandatory attendance grade dock, going to class is beneficial for the student. It’s not a secret that showing up for class correlates with a better understanding of the subject matter and typically yielding a good grade. As it turns out, professors tend to be well educated, they tend to know what they’re talking about and they tend to be capable of teaching a thing or two. Not to mention that professors usually focus class time on materials that the test will cover and typically are more lenient with students with whom they have fostered a relationship. But even aside from that, with Pepperdine’s tuition at $46,692 (assumed neither scholarships nor grants), a presumed 16-unit course load, and a given 14-week semester duration, each unit comes to a total of $52.11 per unit per class. This means that my four unit PHIL 290 costs me roughly $208.45 per class and to knowingly miss class is to consciously throw that much money down the drain.

Besides, University students are transitional adults who are expected to make appropriate and correct decisions in life else be held accountable. Why then is the actual physicality of showing up somewhere on time seen as worthy of coddling?

With all of this in mind, it is clear that students are going to attend class and that if they don’t, it is their own prerogative. Sometimes schedules become unnavigable, family emergencies come up or other conflicts arise. But the student should not be punished for willingly acting outside of their best interest because clearly whatever was pulling them away from class, even if it is just the extra sleep, was a worthy cause to the student. Students should reasonably be allowed to govern themselves.

Then mandatory attendance becomes nothing more than grade inflation according to a March 25, 2012 article in USAToday titled “Should class attendance be mandatory? Students, professors say no.” If attendance is a mere 10 percent of the final grade, which it is in my Education class, and I consistently score 90s, my grade will be bumped up from a B+/ A- to a full blown A, assuming I show up. Conversely, the opposite would happen for someone who decided not to come.

This pattern is similar to giving toys to the good, well-behaved children and taking toys away from the others. Thank you, Skinner, but I believe that as a senior it is high time that academia stops trying to condition behaviors in me.

It is in the best interest of the student to attend class. Simple as that. As young people held to adult standards and given subsequent adult consequences it is beyond patronizing that attendance is seen as something that must be regulated. It implies that we are not capable of making healthy decisions and that we are unconscious of our actions. 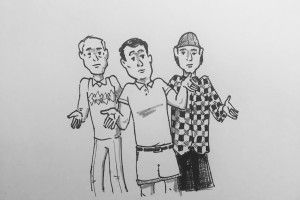 Art by Peau Porotesano When I met with my career counselor last year, she told me that I would most likely switch my career...
Copyright 2018 Pepperdine Graphic
Back to top