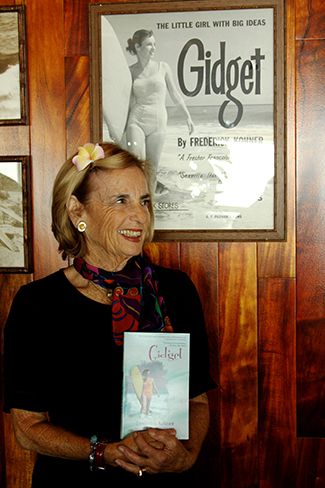 If you stop by Duke’s Malibu for fish tacos on Taco Tuesday or brunch on Sunday morning, you’re sure to be greeted with an “Aloha” by the restaurant’s most spirited greeter, 1950s surf icon Kathy “Gidget” Kohner Zuckerman, whose photos from when she was a teenage girl adorn the walls of this surf-themed restaurant located on Malibu beach.

Zuckerman, 72, was the inspiration for the main character in the original 1957 novel, “Gidget, the Little Girl with Big Ideas,” written by her father, Frederick Kohner. The story, which was about a teenage girl growing up amidst the surf culture in Malibu in the 1950s, was an instant hit. Kohner achieved literary success for the novel—the title of which was later shortened to simply “Gidget”—and went on to publish seven sequels. Many film and television adaptations also followed, the most famous of which was the 1959 film “Gidget” starring Sandra Dee.

The story of Gidget is a story about young love, the passage between childhood and adulthood, and most importantly, surfing. Zuckerman fell in love with surfing during the summer of 1956 when she got her license and started driving down to Malibu to learn to surf. Although she was the only girl she knew who surfed, she was accepted by the surfers and was admitted into their group. They gave her the nickname “Gidget,” short for “girl midget,” because of her petite 5’1” frame. At the age of 16, she embraced her independence and spent almost all of her time at the beach rather than with friends from her school.

“I wasn’t mainstream; I was a surfer,” Gidget said.

During the summer of 1957, Zuckerman decided that she wanted to write a story based on the events of the past two summers spent surfing in Malibu. Her father suggested that instead of writing about her experiences herself, she should let him write her story. Zuckerman agreed and went through the diaries that she had been writing and together they formed the first novel.

“I started telling my dad everything,” she said. “We had a good relationship. We didn’t have a taboo type household.”

Soon after, the Gidget phenomenon blew up and the surf industry skyrocketed.

“When the book came out I had a bit of an attitude. I knew I was Gidget and I was cool,” Zuckerman said.

But she never had any idea what a huge success the novel would really turn out to be. When Kohner was asked for permission to make a movie of his novel, which would star Hollywood icon Sandra Dee, Zuckerman thought “this is the stupidest thing I’ve ever seen in my life … They’re making a movie about my life in Malibu!”

After the movie’s success, the surf industry boomed.

“The [first] Gidget movie started the billion-dollar surf industry. No doubt about it,” Zuckerman said confidently.

Nearly 60 years later, Zuckerman has a home in the Pacific Palisades and continues to spend much of her time in Malibu, and even occasionally still goes out surfing.

“I will surf the baby waves,” she said, but lately she has joined in on the paddle boarding trend as well.

Despite Malibu’s expansion since the 50’s, Zuckerman recalls her teenage years being spent very similarly to how a Malibu teenager would spend them now—surfing at the beach and then getting milkshakes at a diner called Foster’s Freeze and hanging out at the Malibu Inn.

For most of her adult life, Zuckerman didn’t associate herself with the book. But after spending years working in various restaurants, she felt that her work life had become monotonous and something sparked her to make a change and reclaim her identity as the “real Gidget.” She was lured to Duke’s, a surf themed restaurant right off Pacific Coast Highway in Malibu, because she saw it as the perfect vehicle to continue to share her story with her fans.

Since Zuckerman started working there in 2002, she and Duke’s have been mutually beneficial. Zuckerman is able to sell her books and continue her legacy, while Duke’s gets business from Gidget fans, many of whom travel to Malibu and visit the restaurant specifically in hopes of meeting her.

Self-proclaimed Duke’s regular Chris Keller’s six-year-old niece is one such fan. Keller and his wife drove to Malibu from Ventura so that their niece, Sarai, could meet Zuckerman.

“She’s one of Gidget’s biggest fans,” Keller said. “She’s watched the movie probably 20 times, and this summer she watched the TV series nonstop.”

In addition to the publicity her presence brings to the restaurant, General Manager Josh Morgan says that, as a greeter, Zuckerman is an asset to the family-oriented restaurant.

“She brings a ton of enthusiasm and care for the guests,” he said.

This is how she earned her title as the “unofficial Ambassador of Aloha.” “Aloha,” which is Hawaiian for “love, respect, and understanding” was the motto of Duke Kahanamoku, the original Ambassador of Aloha and the restaurant’s inspiration. It has since become the mantra for Duke’s Malibu.

Zuckerman has also been honored on the Huntington Beach Surfing Walk of Fame and the novel recently sold its 300th copy. There are only three more of the original “Gidget,” the Little Girl with Big Ideas, one of which she just sold for $650.

Zuckerman is still shocked by the phenomenon that the story about her love for surfing has become.

“I had no clue it would be this big and popular … I don’t get the ‘Gidget’ thing; I’m just me!” said Zuckerman. 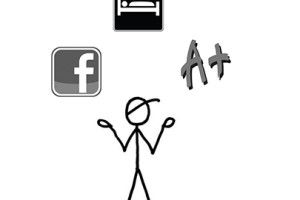 Art by Jacklyn Maza There’s a long-standing joke that as a student, we have three options: sleep, good grades and a social...
Copyright 2018 Pepperdine Graphic
Back to top