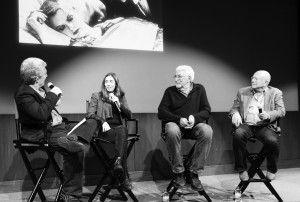 Ominous music fit for an old horror film set the ambiance in the room as a crowd of about 40 socialized before the pre-Halloween party began.

The Hollywood Visionaries Series presented “From Draculas to Dybbuks: The Laemmle Families and Universal’s Horror Films” on Tuesday night in Elkins Auditorium. This series explores of the culture of faith, family legacies and the entertainment industry celebrating Jewish figureheads who helped create Hollywood. This presentation explored the family legacies.

On the panel for this horror themed event was director Pancho Kohner, son of Lupita Tovar who starred in the 1931 Spanish version of “Dracula”; president and owner of Laemmle Theatres, Robert Laemmle; and Antonia Carlotta, great-great-niece of Carl Laemmle.  Professor Craig Detweiler, Director of Center for Entertainment, Media and Culture lead the panel discussion.

The production of the classic horror films that came out of Universal Studios, among them “Dracula”, “Frankenstein”, “Bride of Frankenstein” and “The Mummy”, was overseen by Carl Laemmle and his son, Carl Laemmle, Jr. To this day Universal Studios still embodies the spirit that they pioneered in these films in Halloween Horror Nights. Their cousins, Max and Kurt, founded the premiere chain of art-house cinemas, the Laemmle Theatres.

Carl Laemmle immigrated in 1884 from Germany after the death of his mother.  He never forgot his roots and when the Nazis came to power he brought an unknown number of families to the United States on his own dime.  The audience learned from a biographical video clip  how Laemmle never lost his value of family. He even employed much of his family.

A clip of Tovar, who is now 103-years-old, speaking of the making of the Spanish version of “Dracula” told of how the English cast would work by day and the Spanish cast by night. Both casts used the same sets and blocking marks. The costumes were different for each cast though with the women in particular having different gowns.  Tovar’s gown was much lower cut in the bust than that of her English-speaking counterpart. Tovar became known as the “Sweetheart of Mexico” because of her film work and the Academy has paid tribute to her.

The purpose of the series is for students to mingle and connect with Hollywood icons.  The last event of this series, Women in Hollywood: 100 Years of Negotiating the System, will take place on Nov. 15 and 16 at the School of Law. The symposium, which include film historian Cari Beauchamp, director Lesli Linka Glater “The Newsroom”, director Victoria Hochberg “Ghost Whisperer”, Nell Scovell, co-writer of the massive best seller, “Lean In” with Sheryl Sandberg, and the producers of the young adult series Lucy Fisher “Divergent”, Nina Jacobson “The Hunger Games” and Melissa Rosenberg “The Twilight Saga”, among others.

Registration is available now through the Center for Entertainment, Media, and Culture page of the Pepperdine website: www.pepperdine.edu/entertainment-media-culture.