Letter to the Editor: Don’t Settle on LGBTQ+ Issues

As many of you know, my first experience in organizing was fighting for official club recognition of an LGBTQ+ student organization at Pepperdine University. Today, Pepperdine has recognized a group called Crossroads — and the response from my former classmates and friends has been overwhelmingly positive — but I’m not ready to throw a victory party.

In 2011, our group, Reach OUT, presented a petition to the University after a year and a half of extremely frustrating meetings where were essentially told that our group would likely be recognized only if we explicitly affirmed Pepperdine’s sexual ethic of no premarital sex — aka all queers must be celibate. We finally presented a petition that said we were neutral on that issue, and were told to our faces by Dean of Students Mark Davis that it was impossible for LGBTQ+ students to be neutral on that question.

We were also under enormous pressure not to be “political gays.” God forbid we be “political.” Our petition was ultimately denied, and even after a 10K-strong Change.org petition, endorsements by all the graduate schools and Seaver undergraduate Student Government Association, 20-plus national media hits, and boycott calls by alumni to the Office of Annual Giving, we were only granted the ability to reserve classrooms,\ and told we could have always advertised meetings anywhere on campus.

The student group recently recognized wastes no time in telling you (within the first sentence of its mission statement) that it is not a political group. It then says, “Crossroads holds onto the firm belief of respecting Pepperdine policies and ethics and will not advocate for any change other than the inclusion of LGBTQ+ students. In addition, this organization acknowledges and respects Pepperdine’s affirmation of the historical sexual ethic.”

The primary need that my Reach OUT queer family sought to address was community. We absolutely needed to be a place of support for students first and foremost. But we never slapped an apolitical label on ourselves. I think we may have said we wouldn’t weigh in on gay marriage, but to my mind, that was one specific fight (that was lower on my personal list of priorities at the time).

Currently, I spend an enormous amount of time thinking about structures that are set up to discourage political action. I am committed to fighting — on a personal and professional level — for the rest of my life to create a system in which those barriers are broken down. It is true that not every group has to be political. But for a university that dragged its feet for this long on the question of whether any LGBTQ+ student organization could exist on campus, a university that was anything but Christ-like in its treatment of two members of the women’s basketball team who were in a relationship (to the point where they lost their scholarships in total violation of NCAA rules, and one attempted suicide) — to only recognize a group that is upfront labeled NON-POLITICAL tells me that it is going to be at least another decade before Pepperdine’s “prayerful consideration” decides that being political is not only justified, but necessary in the face of anti-queer oppression.

But no, Pepperdine’s hands are tied from taking action in an organized way. Because faith. Or something.

I’m also not going to pretend to be OK with the sex-negativity in Crossroads’ charter, either. This group may well erase some of the stigma of being an LGBTQ+ student at Pepperdine just by existing, but does it actually erase stigma for some of the most marginalized students who need it most? So many of us LOL’d and (badly) pretended to observe the (never enforced) “don’t have sex before marriage” rule, but there was still certainly a culture of shame and stigma around sex.

Is Crossroads an actual safe space for that freshman who just came out and is having an STI scare? That sophomore who’s already battling depression and afraid that their HIV-positive status will definitely be the thing that makes their parents kick them out? That bisexual girl who’s already been slut-shamed just for being bisexual and can already hear the victim-blaming when she’s raped by partners of different genders?

I also spend a whole lot of time thinking about incrementalism versus more radical theories of social change. About short-term versus long-term. About the many people throughout history who have been silenced by/ erased from movements that threw some under the bus for a victory that would be easier, faster. About how part of me wanted to be more gender nonconforming and knew they had some serious problems with the gender binary at Pepperdine — but couldn’t take those steps, because they felt so pressured to be the nice, reasonable, face of the movement.

I want Pepperdine students to keep pushing that envelope and not be complacent. 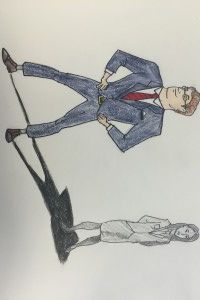 Art by Peau PorotesanoIn this day and age, it’s tempting to think that men and women are equal in most aspects of society....
Copyright 2013 Jupiter Premium Magazine Theme
Back to top