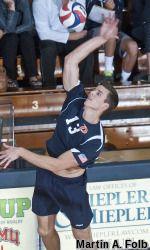 Opposite side hitter senior Parker Kalmbach scored his first ever triple-double as Pepperdine’s men’s volleyball team defeated USC on the road 3-1 on Jan. 16. Kalmbach was able to secure the triple-double with a block on USC freshman Lucas Yoder in the final set, finishing the night with 11 kills, 10 blocks and a career-high 13 digs. His triple-double was the first for any Wave since 2010, and is only the fourth triple-double for any Mountain Pacific Sports Federation player since the 2007 season.

“I was really stoked, really pumped on that because we had a really good game against USC and jumped up three spots into the rankings to first place,” said Kalmbach. His recognition by the AVCA comes on the heels of another AVCA honor given to the team as a whole, who were ranked as the new No. 1 team in the AVCA Coaches Poll on Monday.

“I think it’s awesome because we haven’t been ranked in first place in a few years … everyone is more on the same page and we have a really good team dynamic,” Kalmbach said.

Pepperdine’s men’s volleyball team has been off to a solid start this season, holding a commanding 4-0 lead thus far in MPSF play. The team secured a come from behind win on the road Wednesday against Cal State Northridge, with the Waves out blocking the Matadors 21.5-9.0 and winning the match 3-2. The Waves will faceoff against Long Beach on the road tomorrow before returning to Malibu to face BYU on Jan. 31.

“I hope to get more and more Pepperdine students to our home games. I think it’s cool that we are doing well and representing the school and I hope we can get more people involved with what we are doing,” Kalmbach said. 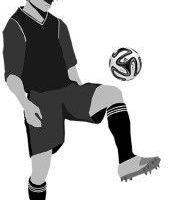