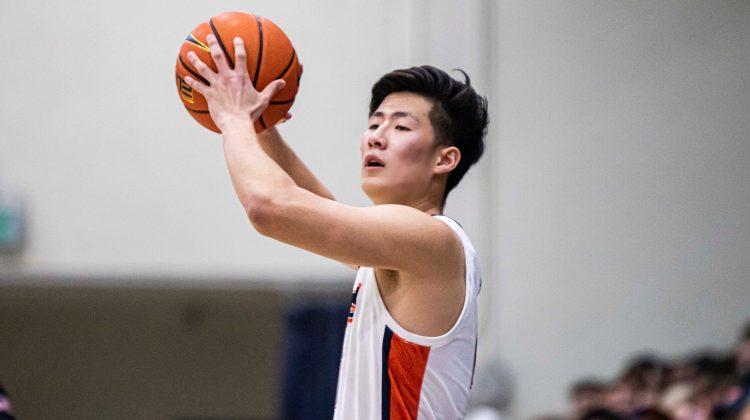 Men’s Basketball senior guard Jay Yoon looks for an open teammate versus Gonzaga on Feb. 16. Yoon said his dream is to see the 1% of Asian Americans in the NCAA grow tenfold. Photos courtesy of Jay Yoon

One of them resides in Malibu, Calif.

Four letters stitched on the back of a jersey represent a story of strength, perseverance and dedication.

“Putting on that jersey every day, knowing that as a Korean American, that I’m kind of a trailblazer, just for the youth generation for Asian or Korean Americans, per se. That’s something I really take to heart and that I pride myself in,” Men’s Basketball senior guard Jay Yoon said. “That will carry for the rest of my life knowing that I have and will continue to try and make an impact for the next generation of Asian American athletes.”

Yoon said there’s always a stereotype with Asian Americans on the basketball court.

“Whenever someone looks at you from the outside perspective and seeing an Asian American on a Division 1 basketball program, they’re like, ‘Oh, this guy. Who is this dude?’” Yoon said. “But I never really minded much about that.”

The team embraced Yoon and accepted him for who he was, making the transition of coming to college easier, Yoon said.

Hailing from Arcadia, Calif., Yoon said he grew up in an academically focused school with a very cut-throat culture. This culture installed the grit-like personality that Yoon carries with him to this day.

Yoon carried that approach to everyday life and addressed each day with the mindset of improving himself and the team, Yoon said.

“It’s not just about me,” Yoon said. “It’s about how we as a collective unit to continue to strive for excellence.”

Yoon finished his high school career with averages of 18.5 points, 8.7 rebounds, and 2.0 assists as the No. 307 ranked recruit in the state of California, according to MaxPreps.

Coming out of high school, Yoon said he received an offer to a Division 3 school but chose to attend Pepperdine without a spot on the basketball team.

Yoon said he emailed the Pepperdine coaching staff with his game film, resume and accolades from high school, but the coaches never got back to him. During Waves Weekend in the fall of 2017, his parents suggested that he should check out the basketball office to introduce himself and put his name out there.

“I was reluctant at first because I was like, ‘Man, they didn’t respond to my email. I don’t even know if they need anyone or if they’re holding tryouts,’” Yoon said. “And then I went up to the basketball office saw one of the coaches there. And then he said he saw my email. He saw my film, but he just didn’t have time to get back to me. He told me that the guys were on campus during the summer session, working out together as a team.”

For the next two weeks, Yoon said he and his mother would make the drive from Arcadia to Malibu for summer pickup sessions.

“Even though it might have been annoying for some of the coaches, I had something to prove,” Yoon said. “And I had an ambition that I wanted to achieve. So that was the whole process.”

Head Coach Lorenzo Romar appreciated Yoon and his family’s dedication throughout the summer, Yoon said. Yoon said he was able to secure a spot on the team as a walk-on.

Yoon said he’s grateful his parents drilled the Korean mindset and was able to confide in them every trial and tribulation he faced.

“I’m blessed in family culture where I embody that as well,” Yoon said. “So I think that is something that I’ll never forget, just knowing my roots and where I come from, and who I’m playing for as well.”

As a student-athlete, Yoon said the biggest challenges for him were mental health and time management. With basketball being a year-long commitment, Yoon had to find the balance between his social and athletic life.

“It’s bigger than who I am and what I can bring to the table,” Yoon said. “It’s more so how I can support the team, how I can impact someone’s life, even in a minor way.”

After four years at Pepperdine, Yoon said he treasures memories of traveling and bonding with his team.

“On the court, they’re all dogs,” Yoon said. “They’re all great basketball players and they offer so much off the court. They’re so much more than just athletes, they’re much more than high flying dunkers or knock-down shooters. There’s so much depth and so much personality is getting to know that and seeing all of that, and that coming together in one team. I think it’s so beautiful to see.”