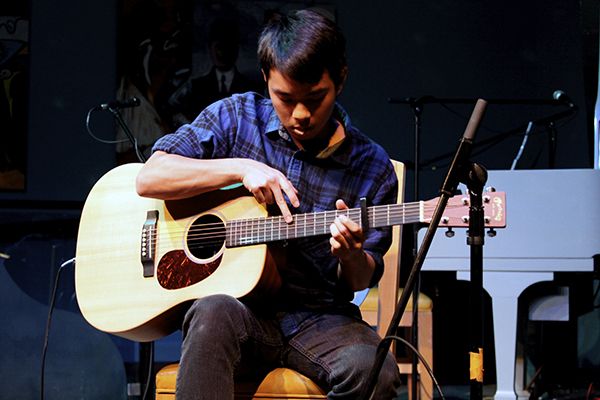 Friday night the Sandbar was transformed from a Jamba Juice and homework hangout to a dimly lit coffee house complete with the smell of coffee and fresh pastries supplied by Porto’s Bakery. The seats arranged in neat rows facing the familiar pale blue piano were hard to come by as the lights dimmed. Thus the first CoffeeHouse of the year began. CoffeeHouse has always been a way for students to showcase their talent, whether it be with a microphone or an instrument. It is also a way for students to appreciate the talent of their peers.

Timshel, a band of sophomores who used a kickstarter campaign to fund their first album, opened the show with a cover of “Ho Hey.” It set the night off with a few covers and original songs. They also announced the release of a new EP in November that will be available on Spotify and iTunes.

In terms of performance value, the CoffeeHouse was a success. A total of seven performances with acts from rap to solo guitar, the CoffeeHouse highlighted a wide array of musical talents on campus. A stunning performance by junior Jordon Seah on guitar left everyone speechless while freshman Kiana Scott showed off her clear voice and piano skills.

Shout out to all of the CoffeeHouse performers for exceeding expectations and providing an insight into the talent pool at Pepperdine.

At next month’s CoffeeHouse, every act will be doing Disney covers in honor of the Disney theme — complete with a costume contest with a special prize of tickets to Disneyland. So now, armed with the knowledge of free coffee, pastries and talent, be on the lookout for next month’s CoffeeHouse on Oct. 25 at 8 p.m. in the Sandbar.