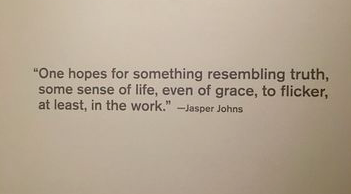 The Broad’s newest exhibit, “Jasper Johns: Something Resembling Truth’” comprehensively surveys the works of American painter and sculptor Jasper Johns through his six-decade career. The exhibition guides the viewer through eight rooms, allowing them to trace Johns’ evolution as an artist from his beginnings in Neo Dada and pop-art themed works to his later abstract expressionist works. 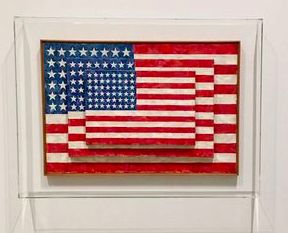 Johns’ career pursues “an intense investigation of the visual world and the human response to it,” according to the biographical information at the exhibit. The first work audiences see before entering is “Painting with Two Balls,” a piece that seems to “defy all the rules of a classic painting on canvas” according to exhibition-viewer Brittany Ott.

“The balls lodged in the middle of the painting break open the canvas so it’s almost as if the painting is less of a representation of something else, but a view of the wall behind it and the world around it,” Ott said.

This painting’s deviation from the canvas into the real world is symbolic of Johns’ goal as an artist. A quote by Johns himself on the wall next to this first painting summarizes the theme of his retrospective: “One hopes for something resembling truth, some sense of life, even of grace, to flicker, at least, in the work.”

The first room contains what is considered to be Johns’ most famous work: “Flag.” In this work, a rustic-looking American flag entirely spans a 42 x 60 inch canvas. In using such a familiar symbol, Johns hopes to “make the familiar unfamiliar, inviting viewers to look more closely at what he calls ‘things the mind already knows.’”

According to the information at the exhibition, one uncited critic summarized the ambivalence of this painting, asking, “Is this a flag or a painting?” This sort of commentary fulfills Johns’ goal for viewers to break their fixed habits of perception. The rest of the works in this room incorporate the American flag motif in other ways, including a smaller flag on an orange background in “Flag on Orange Field,” and the three-dimensional piece of stacked flags in “Three Flags.”

The next rooms progress to Johns’ works in sculpture. At this point in his career, Johns was interested in paintings and sculptures as literal objects, rather than as “window like illusions or vehicles for self-expression,” according to the information at the exhibit. Works displayed include sculptures of flashlights lodged into stones, and a work of dripping paintbrushes arranged in a bouquet-like formation in a coffee can. The simplicity of the objects that Johns utilizes for his sculpture is distinct to his work. 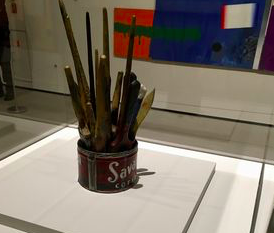 “These are the type of sculptures I want in my house … [they] remind me of how special things that seem mundane can be,” says Ott. “There’s nothing really elusive about these everyday objects, but it makes me appreciate the nature of simple things, which I think is beautiful.”

The next rooms display what is considered to be some of Johns’ most visually-perplexing pieces. Johns’ painting “False Start,” features the names of the colors painted and stenciled onto brush strokes that are different than the colors described. Several other paintings in the same room present the same type of visual, intended to challenge the viewer’s perception of systems of meaning. 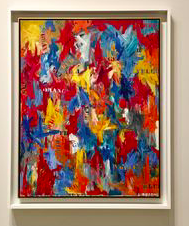 Overall, the exhibition provides audiences with a new perspective on visual perception.

“I liked the exhibit because it made me think more about simple and ubiquitous visuals that I don’t really question that often, like flags or the names of colors,” said gallery-viewer Samuel Jensirwanich. “It challenged me to think more about the ways that I see the world, and why I see things the way I do.”

Tickets to “Jasper Johns: ‘Something Resembling Truth’” cost $25 and include general access to the museum, and are free on the the first Thursday of every month until May 3. Tickets can be purchased online or at the museum. 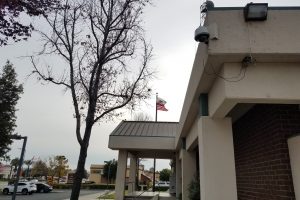 Photo by Hansol Hwang When using Craigslist, terms such as “the Craigslist killer” can linger in the back of one’s...
Copyright 2013 Jupiter Premium Magazine Theme
Back to top