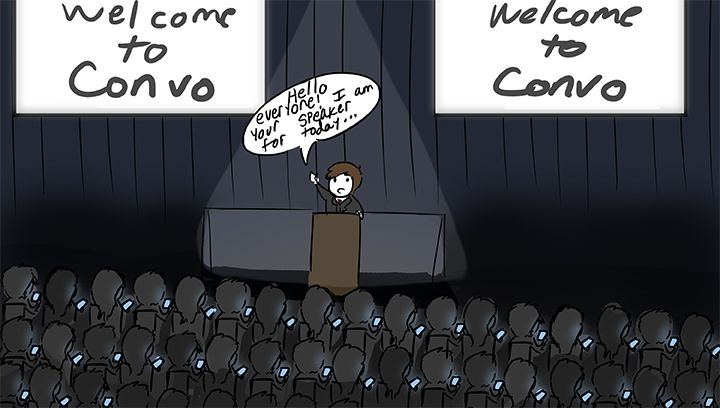 Convo isn’t a new topic at Pepperdine. It seems there is constant debate over whether there should be fewer requirements, different requirements or even no requirements.

We aren’t here to bash Convo, but as busy students with full course loads, extracurriculars and for many of us jobs and internships, we’ve been trying to figure out why Convo seems to be more of a struggle this semester than in past semesters.

We found ourselves wondering what happened to Athlete Convos, why there seem to be fewer Convos in general and why — even though we love the idea of student-led Club Convos — signing up seems so difficult. The current system of Convo just seems to be a bit puzzling in general.

According to the Convocation website, Convo is dedicated, “To help Pepperdine students build Christian faith, affirm Christian values and address the moral and ethical dimensions of current issues.”

The website goes on to describe that Pepperdine has always included some sort of regular assembly in which students could gather to grow in faith, hear engaging speakers and learn how to make a difference in this world.

We spoke to Director of Convocation Sarah Jaggard regarding the intention of Convocation. “Historically, Convocation is something that contributes to making Pepperdine what it is,” Jaggard said.

However, there is a possibility some students would disagree with Jaggard’s sentiments. Just look around during Wednesday Convo. It is not an uncommon sight for cell phone screens to paint Firestone Fieldhouse like a rock concert while students ignore the Convo speaker.

This poses a problem. People are so uninterested by Convo that they don’t even bother to act like they’re paying attention. You might’ve noticed that there used to be people who enforced the no cell phone policy, which is no longer the case.

Cell phone monitoring during Convo used to be enforced by the student employees hired by the Convocation office, but Jaggard said she felt that the policing model didn’t give students an opportunity for choice, as it wasn’t the role of the Convo office to force people to pay attention. It may not be their role, but if students know there is no one enforcing rules, then it’s way easier to break them.

While we understand (and empathize) that at times Convo can be more of an item to check off one’s to-do list than the ideal spiritually nourishing endeavor, the speakers and workers who put on each Convo also deserve our respect. The Convocation office has been having many conversations about the role and execution of Convo, trying to move away from the negative connotation students associate with it, according to Jaggard.

There are other problems relating to Convocation besides the blatant disregard most students have for the whole process. The idea of Convocation counting as part of each student’s GPA and the confusion that comes with whether it actually counts is off-putting to many current and prospective students.

One’s Convo grade is worth one half unit of academic credit each semester, totaling four by graduation. These units don’t contribute toward the 128 needed to graduate, but the grade earned does apply to one’s GPA and appears on your school transcript as “Seaver 200.”

The plus side is there are a myriad of Convo events to suit your particular taste. The diversity of Convos, according to Jaggard, is created “to accommodate different learning styles,” as everyone is different and has unique ways of growing. It adds a “variety of textures” to the experience.

There are also Convos geared toward helping students enrolled in International Programs. LIGHT (Living In God’s House Together) is intended to help students who went abroad seamlessly reassemble into Pepperdine. On the other hand, SALT’s (Serving As Leaders Together) purpose is to help prepare students who are leaving for abroad programs.

Club Convos are one of the main ways that many students fulfill their Convocation credits on campus, but they are relatively new, Jaggard said. She said she considers them to be a generous extension of benevolence to the student body that may have been turned into an “entitlement issue” for students — increasing their demands and expectations on the Convo staff.

The university also wanted Club Convos to be stricter since they affect academic credit. This means it’s not only a matter of efficiency, but also one of integrity.

But how do you find Club Convos? It’s not as easy as it could be. Everyone has the option to publish their Club Convos on the Convo website. Most student groups, however, don’t because they want to create Club Convos for groups that already exist (such as dorms, sororities, etc.).

We’d like to propose a solution: A more streamlined communication to students about Convocation offerings, in combination with student initiative to find and participate in Convos that we care about.

That way, students would get the events/Club Convos they want, the Convo office would obtain better student responses and students would have a more positive experience. As Oprah would say: You win, they win, we all win!