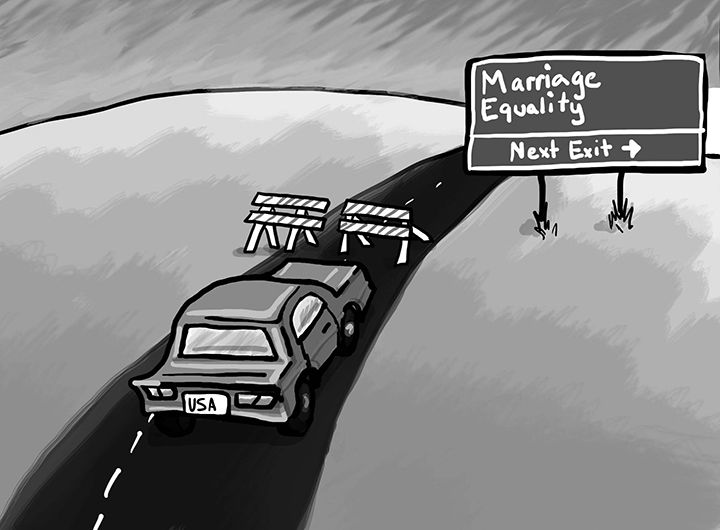 Recently, Indiana Gov. Mike Pence passed a state religious freedom law that has sparked controversy around the country. The palpable problem with the passage of this law is its general wording, which allows for the expansion of discrimination against the LGBT community based on religious values, according to Mariano Castillo’s April 2 article “Things you missed about Indiana’s religious freedom law” for CNN.

Pence’s defense for passing this law was that it “simply mirrors” the federal Religious Freedom Restoration Act, according to a Facebook post by Sen. Chuck Schumer, D–N.Y. The late Sen. Ted Kennedy, D–Mass., wrote the current federal RFRA, while Schumer, who was a congressman at the time, introduced it in 1993.

Schumer immediately shut down this defense in his post and said, “That may be true only if you’re using a funhouse mirror.”

At a time when 37 states have legalized same-sex marriage, according to freedomtomarry.org, including Indiana for that matter, encountering these types of legal setbacks seems a little outdated to say the least. The uproar seen after this law passed can easily be connected to the fact that as a country we are moving in a progressive direction. A law like this probably blindsided a massive part of the population who were living in blissful ignorance and believed the fight for marriage equality was already over.

In the reality of the legal system, the fight for same-sex marriage is on its way to victory, since there are only 13 states left to jump on the legalization bandwagon. Because if you think about it, what judge today would pass a law that makes it illegal for same-sex couples to marry when more than 70 percent of the country has already legalized it?

It would be foolish of me to deny that circumstances can change, but in the essence of time and progression, we are already on to a pretty good start, and I would say the national reaction to the Indiana RFRA passage reaffirms that.

As a country, the real question is: What can we do to prevent misinterpretations like this from reoccurring? If what Pence said is true, and the reason this uproar began was because he essentially mimicked the federal RFRA, then the obvious action to be taken would be for the government to have another look at the federal law. After 22 years, it couldn’t hurt anyone to take a second look or even make an update.

Not only is Indiana one of the first states to take advantage of this outdated law, but Arkansas is on its way to becoming the second state to do so as well, according to Howard Friedman’s April 1 article “10 things you need to know to really understand RFRA in Indiana and Arkansas” for The Washington Post. The difference with Arkansas’ RFRA state law being passed is that they can see how the country is reacting to Indiana standing on the frontlines of this disgruntled change, and can possibly learn from it themselves.

But will these nationwide reactions change the mind of Arkansas’ state government enough to have them readjust or abolish the bill at hand? Most likely not; however, a second state attempting to spark discrimination against the LGBT community of our nation’s population should be even more of a cause for action.

Here’s an easy example for how such a law easily becomes a loophole for those looking to get around current government laws — spoken or unspoken.

Castillo said, “Some are already hatching plans on how to test the law, including Bill Levin, founder of The First Church of Cannabis, who argued on CNN that the law should protect his right to smoke pot.”

Under the jurisdictions of this law, maybe The First Church of Cannabis will have a victory, since their religious beliefs reaffirm their religious rights to smoke pot. Nothing has been approved or set in stone yet, but these are the kinds of reactions we can expect to such a general, drastic law. Such a law provides a loophole, as seen under these circumstances, and it becomes a source of discrimination toward the LGBT community that exists in these states.

Since Pence has already passed and enacted the law in Indiana, there is no turning back; there is only moving forward. We can do this by revisiting the federal RFRA law, that at this point needs a little bit of a touch-up to prevent these kinds of misinterpretations from occurring again.

In a tweet, Ellen DeGeneres, equal rights activist and queen of entertainment, said it best, “For anyone who is refused service under #Indiana’s new law, you deserve better. Acceptance and progress take time. But they always arrive.”