Irene Ruiz smiles for a photo in the shop she works at on Olvera Street, where she sells Mexican-imported items like pottery and leather goods. Photos by Megan Williams

Colorful flags wave and the smell of Los Angeles’ most famous taquitos float through the air as Mariachi music plays and vendors call out in Spanish from their booths.

This is Olvera Street — a little slice of Mexico nestled in Downtown LA — only a 34-minute drive from Pepperdine.

Short drives of 10 miles or less can transport a person from Mexico to China, then to Tokyo and Ethiopia, all without leaving Los Angeles. Many believe that the city serves as a living example of the “Great American Melting Pot” metaphor Schoolhouse Rock made famous.

But scholars today take issue with the melting pot metaphor and have begun pushing a different metaphor that sends a contrasting message: “The Great American Chopped Salad.”

“The problem with the melting pot metaphor is that it implies that all of this uniqueness and all of this difference is going to finally disappear and even out and that we are moving toward some kind of standardization of the American experience,” said Jeffrey Schultz, professor of Western Culture and English. “I don’t think that is a good way to approach it and I think we would do well to preserve as much uniqueness as we can.”

While comparing America to a melting pot suggests assimilation and homogeneity, the chopped salad metaphor allows for various cultural groups to come together as ingredients and form one cohesive American “dish” while still retaining their unique cultural flavor.

“It’s a better ideal,” Schultz said. “It is a better thing to reach toward — to preserve these differences and come to appreciate how these very different [cultures] can sit with each other and all be a part of the same wonderful thing. That would be a wonderful way for the world to work.”

Yet Schultz also said there are deeply rooted economic and societal forces at play that push Americans toward sameness and melt away important differences.

All immigrants to the United States have historically been viewed as an “ethnic other,” History Professor Tuan Hoang said. They experienced forced assimilation into the dominant Anglo-Saxon culture at the hands of the American government and sociocultural pressures.

The U.S. government enforced The Native American Assimilation Act from 1790 until 1920, giving indigenous people “American” names and forcing their children to attend “American” schools, Hoang said. There they would cut their hair despite its significant spiritual meaning, and punish any show of Native culture with brutality.

Enslaved African-Americans, who were brought to America, were intentionally divorced from their culture and ancestral stories and forced to obtain the last name of their enslavers, Hoang said. The slave trade and all that followed has led Black people in the U.S. to lack a significant understanding of their ethnic heritage and ancestry.

As recently as the 1960s, The Immigration and Naturalization Act of 1965 diversified the groups entering the United States, eliminating the national origins quota system and increasing the number of immigrants allowed from each nation-state. This drastically increased the influx of immigrants to the U.S. from Asia, Hoang said.

The metaphor of the chopped salad poses a challenge to the history of the melting pot and encourages America’s various cultural groups to stand out and embrace what makes them special.

And in downtown Los Angeles, they are doing just that.

The salad bar of Los Angeles

All less than 10 miles from one another, LA’s cultural districts provide an opportunity for locals and tourists alike to learn about other cultures without ever leaving Southern California.

“I do feel like growing up in the LA area I got to be exposed to cultures that I would be unfamiliar with otherwise,” said Arianna Shishoian, Pepperdine first-year and recruitment chair of the Armenian Student Association, who grew up in Glendale.

Schultz agreed. After living in Oregon and Michigan, he said living in LA was a culture shock in the best way.

“I lived in East Hollywood my first year in California,” Schultz said. “I have this specific memory, walking four or five blocks down to the post office, and I think I would hear probably a dozen languages on my way there. It was fantastic.”

The people who live and work in these communities are eager to share their stories and their culture with the people around them.

Aki, an Ethiopian immigrant who declined to give her last name, has owned a shop in Little Ethiopia and watched the community evolve over her 30 years living in the United States. She believes that anyone interested in Ethiopian culture should visit Little Ethiopia’s various shops and restaurants.

“This is a good place. The food, the coffee ceremonies, the culture,” she said. “The whole thing you can learn here. Everything right here.”

She said that while Ethiopian immigrants own most of the shops and restaurants, the surrounding neighborhoods are very American.

“Ninety percent of the [customers are] American because they love our food; the community is safe,” Aki said. “They have everything. They have restaurants, the market, they can buy any spice. If he wants to cook at home, he can learn everything here.”

Aki said getting to share the traditions and customs of Ethiopia with the city of Los Angeles has been both interesting and lovely.

“Oh my God, I love it!” Aki said. “I love enjoying it, to learn another people. I’ve explained to a lot of people how [Ethiopians] cook, how they eat and hand-feed each other. Coffee ceremonies are such a nice get-together for people to learn like that.”

Nikki, who also declined to give her last name, has been in LA for 25 years since she immigrated from Tokyo. She owns a store called Blooming Art Gallery, and while she said Tokyo is bigger, cleaner and more spacious than LA, Little Tokyo is a great place to be exposed to Japanese culture.

“In Little Tokyo, I think it’s built up by a generation of Japanese immigrants, but these days it is all mixed,” Nikki said.

Nikki recommends that anyone new to Little Tokyo checks out the cultural center and museum, or the stores that sell more authentic Japanese goods.

“I go to Japan often, once every three months, I bring things from Japan here to sell at my store and introduce people to more real Japanese culture,” she said.

Jumel Labo, who was raised in LA and is a barista at Cafe Dolce in Little Tokyo, agreed that Little Tokyo is the perfect place for someone who is interested in Japanese culture.

“The people at the Japanese Museum are really knowledgeable, and there’s a lot of artwork too so I think that’s a great place to start,” he said.

Irene Ruiz works on Olvera Street, selling Mexican imported items like pottery and leather goods. She has only been living in the U.S. for three months.

“The first thing they should know is that the Mexican culture is very friendly,” Ruiz said. “They have to know about the food because there is different food from all of the different parts of Mexico.”

She said she loves the people on Olvera Street and that the food and goods are authentic for people coming to experience Mexican culture.

Glendale, which is heavily populated by Armenians, is Shishoian’s favorite place to bring new friends at Pepperdine who are interested in her culture. Her family enjoys sharing their culture with people who are unfamiliar and always go out of their way to prepare huge meals.

Some of the dishes Shishoian recommends to her friends are ​​Kibbeh nayyeh — a Lebanese dish of raw filet mignon, traditionally eaten with olive oil, bread and fresh herbs — and Baklava, which her family gets directly from Armenia.

Within the distinct cultural districts of LA, there is a visible mixing of cultures. While a person can feel as though they have left California and entered a different country, small things remind one that they are still only a few miles from home.

Chinatown, which is not as heavily saturated with tourists and is much more geared toward the Chinese-American community, shares a few blocks with Olvera Street. 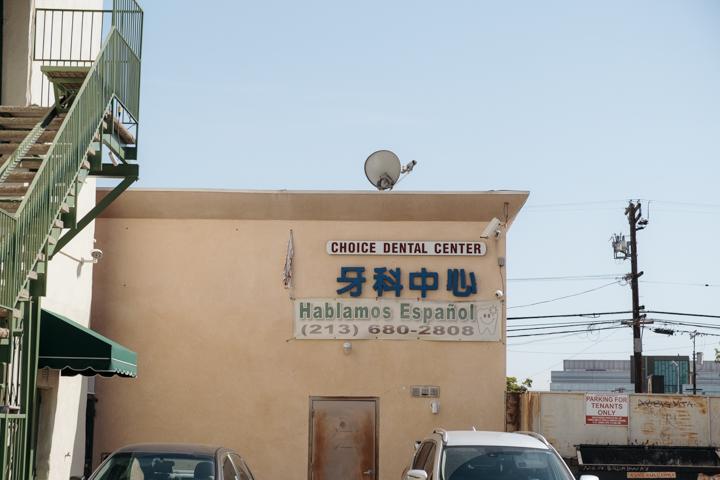 Businesses post signs with translations in English, simplified Chinese and Spanish, in order to appeal to all of the cultures populating the area.

This is how LA truly embodies the metaphor of the chopped salad. While one can see the distinction in the cultures — the Chinese language versus the Spanish translation — they exist together. Like two delicious flavors in the same bite of salad.

Pepperdine has become a more multicultural place over time, Schultz said, but he still does not believe that global citizenship can be achieved without venturing off of the Malibu campus.

“We’re an exclusive community within a very exclusive community, so this is not the place to encounter difference,” Schultz said. “There is the problem of being here, being isolated, being in Malibu. I think everyone who can, should go into Los Angeles as much as possible. Like, one of the great global cities is right there. And you could go eat in a different neighborhood, go find a different cuisine once a week.”

Shishoian agreed. While she loves to visit home for a traditional Armenian or Lebanese meal, she also looks forward to exploring LA even further and venturing out of the comfort zone of her own culture.

“My suitemates and I will go get boba in LA all the time, or we’ll go grab Thai food or Mexican food from places we know will be authentic,” she said. “It’s cool to introduce girls who are from other states to California in that way.”

Schultz echoed Nikki and Aki and urged any Pepperdine student who may be interested in cultures other than their own to come and explore the cultural districts of LA.

“The restaurant that you should go to is the one where there aren’t any people who look like you,” Schultz said. “If you express any interest in someone else’s culture you will learn about it because they want to talk to you about it and are proud of what they’re doing.”