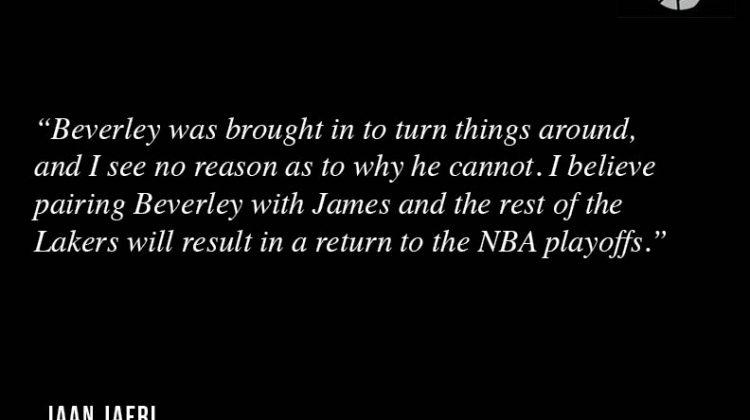 It’s been a rollercoaster of an offseason for Los Angeles Lakers guard Patrick Beverley.

We all remember the show he put on after winning a play-in game against the Los Angeles Clippers last season. How could anyone forget the image of him standing on the scorer’s table, embracing the Minnesota crowd à la Kobe Bryant after winning his fifth and final championship at Staples Center?

The Timberwolves are very forgetful, and on July 6, the Utah Jazz and Minnesota Timberwolves completed the first big trade of the 2022-23 NBA offseason, sending three-time NBA Defensive Player of the Year center Rudy Gobert to Minnesota for Beverley, four other players and a whopping five first-round picks.

Not even two months later, on Aug. 24, the Jazz dealt Beverley to the Lakers to play along the likes of forward Lebron James, center Anthony Davis and guard Russell Westbrook.

The Lakers need to make the most of the tail end of James’ career and return to the form they were at during the 2019-20 season, in which they won the Finals. Last season, they traded much of their supporting cast for former MVP Westbrook, which proved to be a disaster, as they missed the playoffs entirely.

Lakers management brought in Beverly to turn things around, and I see no reason as to why he cannot. I believe pairing Beverley with James and the rest of the Lakers will result in a return to the NBA playoffs.

Beverley is no stranger to the playoffs, making them in 8 out of his 10 NBA seasons. He’s really only missed them one season, as one of the two years where he didn’t make the playoffs was the 2017-18 season — a year he missed 71 games due to injury. He’s played for three different teams during this span, showing one thing — wherever Beverley goes, winning follows.

The Lakers also revamped their roster, as Beverley joins forward Lonnie Walker IV, center Thomas Bryant and forward Juan Toscano-Anderson as new Lakers additions to complement superstars James and Davis. They are expecting bounce-back years from guard Kendrick Nunn, who missed last season due to a knee injury and Westbrook, who simply wasn’t himself in 2022. They’re also expecting improvement from guard Austin Reaves, who may be the only promising returning player from last year’s team not named James or Davis.

Beverley is the new leader of the Lakers supporting cast, and is already the team’s best shooter and perimeter defender, in my opinion. He shot 37.8% from 3 last season, which is the highest out of any active Lakers’ player, according to basketball-reference.com. He’s earned two NBA All-Defensive second team selections, and is widely regarded as one of the smartest and most annoying defenders in the league.

There’s reasonable skepticism surrounding how Beverley will mesh with James and Westbrook, given that he’s had a bit of a history with both of these players, notably Westbrook.

Westbrook and Beverley may have been one of the biggest feuds in the NBA, but things have changed since the trade, with reports and pictures of the two Lakers guards going viral on social media. Both of these players are veterans and professionals who have experienced the highs and the lows of the association, and will be able to work together fine.

James has been in similar situations before, playing with Lance Stephenson and Rajon Rondo, and knows that he just needs to let Pat Bev be Pat Bev in order to succeed.

Beverley plays with heart and a supreme confidence in himself, and he’s at his best when he’s able to put his personality on full display. He yells, he celebrates, he plays hard and, most importantly, he wins basketball games.

As long as Pat Bev keeps being Pat Bev, the Los Angeles Lakers will make the playoffs.