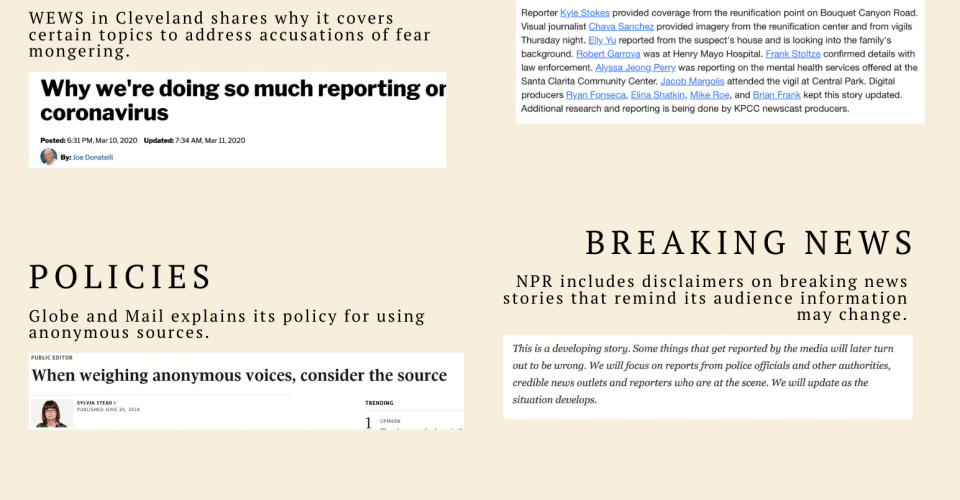 Being a journalist at the height of distrust of the media is challenging, especially for those who are early in their careers. But journalists and those who study journalism are working through the problem to find solutions — most of which revolve around relationships and education.

Although distrust is most prevalent among younger generations — with only 33% of those under age 30 trusting the media, according to a 2018 Gallup poll — hope is also prevalent. Journalists focus on ways to build trust and connect with their communities, and news literacy experts are confident that educating children and young adults will result in a more informed society.

“This is what I’ve been called to do, and it’s not easy — and not just because we’re distrusted: Everyone likes to paint the media with a broad brush, but I don’t think that’s fair, and it’s certainly not accurate,” said Dawn Megli, a reporter for the Thousand Oaks Acorn.

Causes and Consequences of Distrust

Although sources agreed hostility escalated since the Trump administration and negative comments about the media from those in power contribute to distrust, the problem is not new.

Americans’ distrust of the media coincides with their distrust of institutions in general, said Jonathan Anzalone, historian and assistant director for the Center for News Literacy. Other factors that compound this distrust include the rise of cable news, the depletion of local news, increased partisanship and the introduction of social media and algorithms.

In this digital age when “anyone can commit an act of journalism,” Lynn Walsh, journalist and assistant director of Trusting News, said it is difficult for people to identify accurate information and credible sources. Another factor is the public’s lack of knowledge about journalistic practices.

“Because they don’t understand how news works, that leads to them making assumptions, and most of the time, those assumptions are negative,” Walsh said.

Sources agreed distrust of the news media is one of the largest challenges journalists are facing.

“Our whole career is built of people thinking we’re credible,” said Kate Ly Johnston, University of Southern California alumna (’21) and producer for Annenberg TV News. “Without trust, there is no industry.”

But they also agreed it has consequences for the public.

“A society that trusts journalists is one that’s going to be a better society,” said Araceli Crescencio, a Pepperdine and Graphic alumna (’19) and a reporter and producer at WLNS in Michigan. “People with the information — correct information that they can use — will always be valuable, and that’s what matters most.”

Citizens’ cynicism, Anzalone said, is a disservice that may cause them to make harmful choices.

“What worries me most about mistrust in the news media is when it becomes a barrier to people finding helpful, reliable information,” Anzalone said. “There are bad news outlets out there — even good ones slip up from time to time — but it doesn’t mean we should dismiss all news as biased or flawed or worthless.”

Crescencio and Megli said distrust of national news is now seeping into distrust of local news as well, and “fake news” is a term they are hearing more and more.

Megli said people accuse her of fearmongering when she writes about topics like COVID-19 or the 2018 mass shooting at Borderline Bar and Grill and accuse her of being biased when she shares an outside opinion or resource.

“A lot of people use it, not just to dismiss facts that they don’t think are true — they just use it to dismiss facts they don’t like — and so instead of framing something as a simple disagreement, now people try to delegitimize you as a source of information altogether,” Megli said. “It’s definitely become a more, I would say, vitriolic environment.” 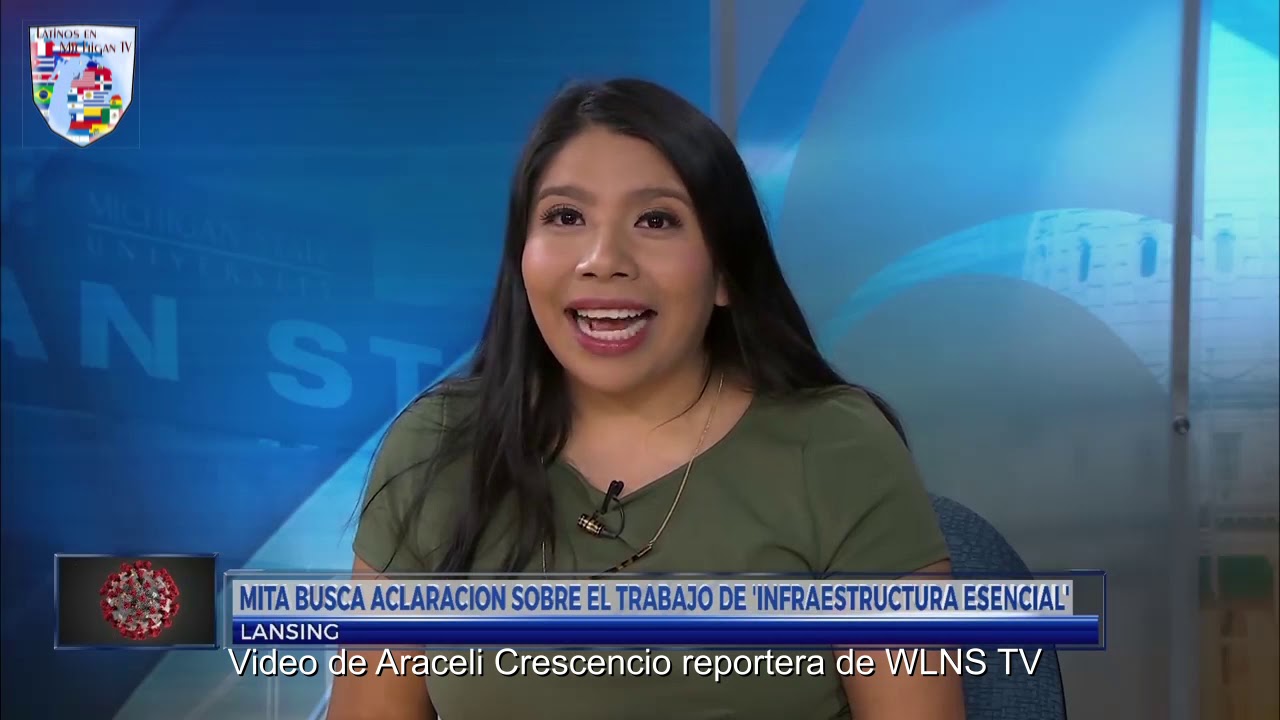 Sources agreed that to build trust, it is critical to first build relationships.

“Journalists are viewed as people who are out to get other people to exploit them for a story,” Johnston said. “You can be a real person to your sources, and that’s going to do so much for establishing trust in journalism in the future.”

Student journalists, Johnston said, are at an advantage because they are already accustomed to having personal relationships with their sources and audience.

Although the internet has made it possible for anyone to publish content, Megan Swift, a junior at The Pennsylvania State University and a news editor for The Daily Collegian, said accuracy must always outweigh speed. To prioritize the wellbeing of the campus community, Swift’s newsroom improved coverage of underrepresented communities, which enabled her to recognize that building genuine relationships with the community takes time and effort.

“It’s a really long process, and it’s not something that happens overnight,” Swift said. “It takes a lot of people — even generations of people — to build that reputation and that trust.”

Crescencio, who strives to interact with her audience through Facebook pages and volunteering, said providing critical COVID-19 updates in Spanish helped her build trust with the Latino community. She said these relationships gave her the strength to cope with the distrust she faced.

“I’ve been able to build a lot of trust with the Latino community because they see my face on a regular basis,” Crescencio said. “Knowing that I was also helping my community meant a lot, especially during that time, and that’s what kept me going.”

Although social media is often viewed as a source of misinformation, many reporters recognize its potential for building relationships. Megli said she uses her Twitter account to earn her readers’ trust by inviting them on her reporting journey.

“I try to share as much about my life and who I am on social media as possible,” Megli said. “When you build a relationship — when we build a rapport with people — they trust you more.”

As someone who believes complete objectivity is unattainable, Megli said she strives to be transparent about the personal experiences through which she views current events.

“The more that people understand what your lens is, the more they trust you as a source,” Megli said. “I’ve actually been able to build a really good relationship with people on all sides of the aisle because they understand me and where I’m coming from. It’s not a matter of me being biased — it’s a matter of me being honest about my perspective.”

Megli said she advises aspiring journalists to follow their hearts, remembering that journalism is not only about the “what” but also about the “why.”

“When you delve into the ‘why’ with people — when you ask them what gives you a heart for this, when you learn more about their personal background and how they arrived at these conclusions or these perspectives — then it informs a better story,” Megli said. “It benefits not just the article but the public at large because that’s the stuff that opens up hearts and minds.” 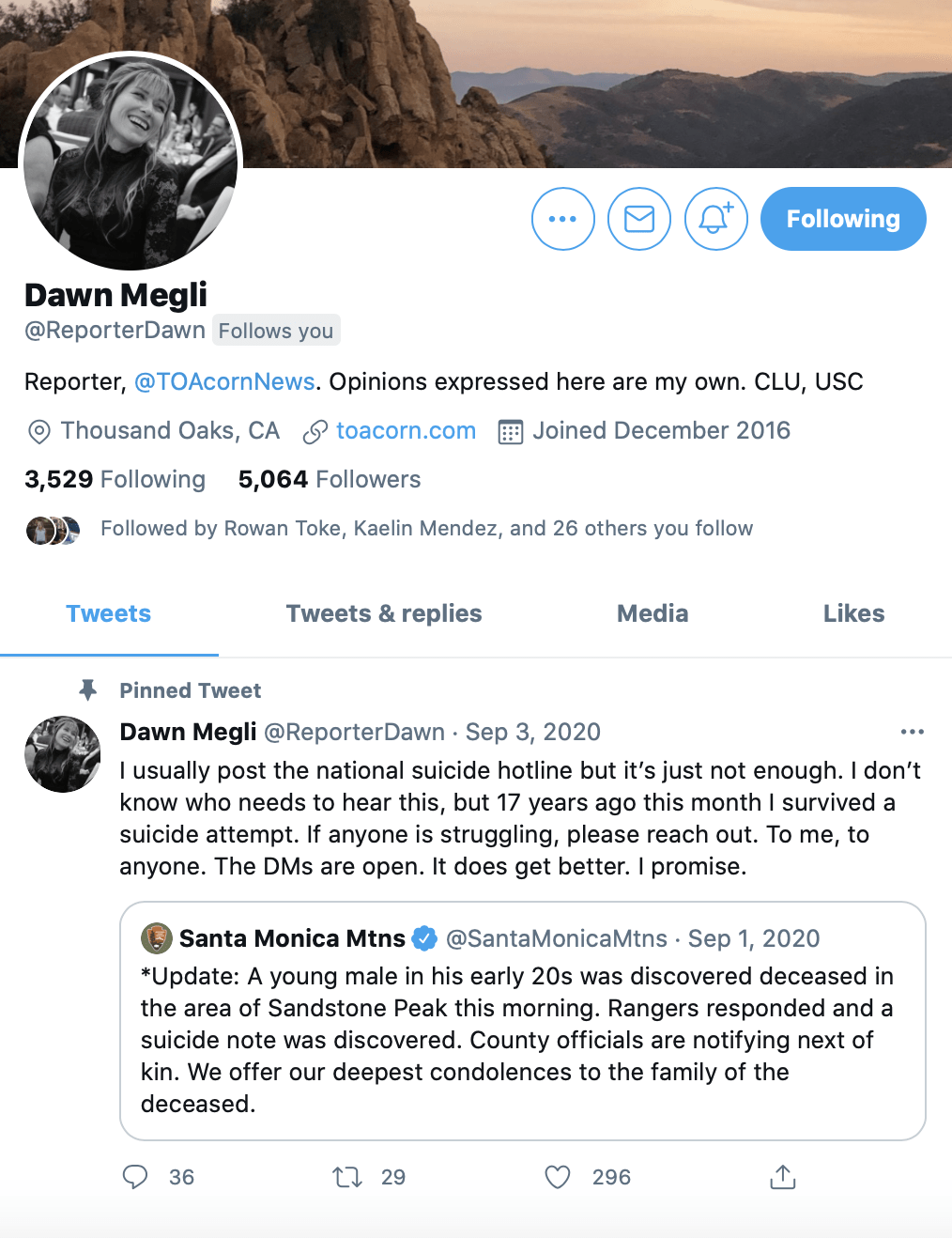 Dawn Megli, a reporter at the Thousand Oaks Acorn, utilizes social media to share her life experiences with her audience. She said this helps readers feel more comfortable trusting her with their stories. Photo courtesy of Twitter

\News Literacy as a Solution

News literacy, or the ability to judge the credibility of information, is one of the primary solutions to distrust of the media because, Walsh said, a lack of knowledge about the media results in often negative assumptions.

Many people, Walsh said, do not understand basic journalistic practices, including the code of ethics, the difference between opinion and news and the process of story selection. Through news literacy, Trusting News and other organizations aim to fill the information gap, increasing trust by explaining how journalism works.

Trusting News, founded in 2016, provides journalists with trust-building strategies, allowing them to educate their audience about their work. Walsh said she views criticism of the media as an opportunity to educate others about journalistic practices.

“I do think people value that transparency — that humility — that goes along with saying, ‘I don’t have all the answers. I’m trying to find them. Why don’t you join this journey with me and we can find out together?” Walsh said.

Newsrooms must be more transparent about their internal policies and their editorial decisions, Walsh said. For example, journalists should explain why they decide to use certain word choices, include anonymous sources or cover certain topics.

Walsh said she advises aspiring journalists to seek, listen to and respond to both positive and negative feedback from all members of the community.

“Engagement is so key,” Walsh said. “We can’t ignore our audience. We can’t seem like we’re up here on the top of the hill with all of the answers because we’re not. We’re a part of the community — we have to make sure people see us that way.”

Educating the Next Generation

“Audience members have a great deal of power in determining what’s covered,” Anzalone said. “They can have an impact by rewarding the news outlets they think do the job well and not giving oxygen to those who are more irresponsible.”

After realizing starting with undergraduate students was too late, The Center for News Literacy established the Long Island Institute of News Literacy Education to grant school districts money to embed news literacy into their curricula. Anzalone said children learn to distrust the media from their parents and peers, and cultivating positive habits requires constant reinforcement.

Founded in 2008, the News Literacy Project aims to help children in fifth through twelfth grade, who have not yet formed media habits, distinguish fact from fiction to protect democracy. 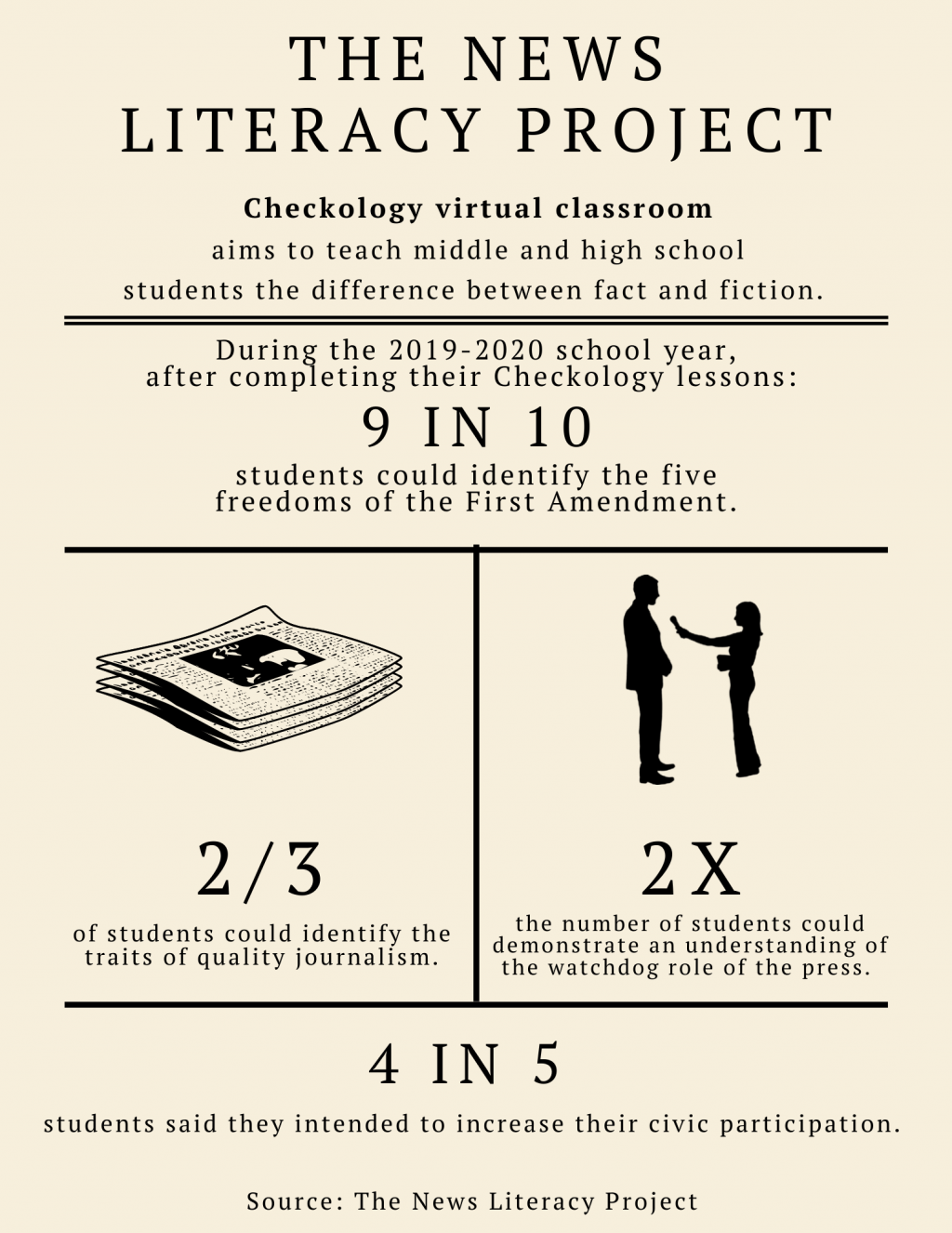 “It’s the most challenging and complex information landscape in human history where kids have so much information available to them, so it’s important they know how to navigate that information,” said Mike Webb, senior vice president of communications for the News Literacy Project.

The organization’s Checkology virtual classroom provides free resources for educators to teach students news literacy skills as well as the importance of the First Amendment and a free press. The program builds critical thinking skills by encouraging students to seek a variety of perspectives and be skeptical rather than cynical.

“If we were able to develop those skills and those traits in people at a young age, then it would last them a lifetime,” Webb said.

Holding on to Hope

Over the past 10 years of teaching news literacy, Anzalone’s students have improved at recognizing misinformation. He said they restore his faith in the future of journalism.

“I wouldn’t trade — even with all its problems — our news media,” Anzalone said.

“It’s hopeful that when journalists explain themselves — when they tell people why they’re doing something — people are more likely to trust in that content,” Walsh said. “What that tells me is that there is a way to fix this problem. There is a way to rebuild that trust.”

Ultimately, Megli said she is hopeful that journalists’ passion for truth-telling will overcome citizens’ lack of trust.

“There is something in humanity that demands storytelling,” Megli said. “Humans are going to continue to figure out a way to share our stories with each other.” 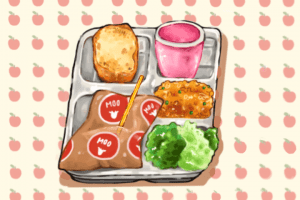 Art By Leah Bae There was a time when milk in cafeterias came in cartons and even glass bottles, but what really made elementary...
Copyright 2013 Jupiter Premium Magazine Theme
Back to top