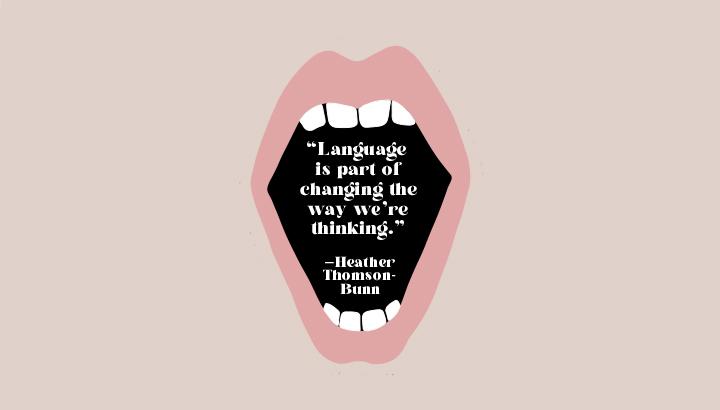 Sticks and stones may break bones, but words have power too.

The way people speak and write on a day-to-day basis either breaks down or fuels gender stereotypes.

“The really interesting thing about language is that it’s a mirror of how we’re thinking, but it’s not just a reflection of how we think,” she said. “It actually can change and shape the way we think.”

Indoctrination into gender stereotypes may start even before a baby’s first word. That’s why Thomson-Bunn and others make intentional choices about what they say, the way they write and how they listen.

Some contend that while the intentions of careful phrasing may be good, words themselves hold no power to meaningfully change concrete problems.

“One of the critiques of ‘politically correct language’ is that, for example, calling a homeless person ‘under-housed’ doesn’t give them a place to live,” Thomson-Bunn said. “There’s a certain perspective in which just changing words doesn’t effect change.”

For Thomson-Bunn and many others, though, changing the way people talk about gender has the potential to affect more than what they deem acceptable and unacceptable to say. She said it can change people’s mindsets.

“I would argue, and I think most people in the field of language and gender would argue, that language is part of changing the way we’re thinking,” Thomson-Bunn said.

Thomson-Bunn teaches her students that language can be a tool to promote inclusivity and break down stereotypes.

In some cases, progress in gender equality has actually come first, with language trailing behind.

Thomson-Bunn said the way people talk about medical professionals exemplifies this process. Since about half of current medical students are female, referring to a woman in the field as a ‘female doctor’ doesn’t make much sense. Many men in nursing still hear the qualification ‘male nurse,’ which suggests that, in nursing, the normative is still female.

Even as close as the Thornton Administrative Center, the titles for professionals continue to evolve. The word ‘chairman’ excluded the women who held leadership positions. Thomson-Bunn said as administration became more balanced in terms of gender, ‘chairman’ became less accurate.

The term ‘girlboss’ came into popular usage following the release of American entrepreneur Sophia Amoruso’s memoir “#GIRLBOSS” in 2014, according to the BBC. Junior English major Samantha Nolan said this is one example of an effort to use language to empower women that seems as problematic as it is helpful — especially because it might suggest that a woman cannot be a true boss.

“It’s a double-edged sword with those words because on one hand, you can see them as empowering and trying to take back those terms,” Nolan said. “Then on the other hand, you could see them as patronizing.”

Sociology Professor Anna Penner said the effect of language on gendered perceptions can be traced all the way back to infancy.

“The words that we choose to describe little boys and little girls are different,” Penner said. “This is true for strangers but also for family members. ‘She’s so sweet’ versus ‘He’s so smart.’ These start indoctrinating us in ways that we don’t realize as kids.”

“The expectation that we have is that boys are going to be unruly so we need to be direct and succinct with them and that girls can handle more emotional conversations,” Penner said.

For some children, family members used language to steer them toward or away from feminine characteristics.

“In Hispanic households, the patriarchy is really alive and well,” said Jose Alcazar, senior international studies and Hispanic studies double major. “It’s like you have, for example, your dad or your uncles or your big brothers telling you that you have to act a certain way to be a true man.”

Alcazar recognized this impulse as one that has been handed down for generations, perpetuating the separation between male and female, between breadwinner and homemaker.

Outside of the home, young people are exposed to ridicule for straying outside of their gender norms at school and among peers, and Penner said the suggestion of femininity in young men seems to be the hardest blow.

“As you hit school age and certainly adolescence, a lot of the put-downs are couched in gendered ways, more so for boys,” Penner said. “Because the worst thing that we can do is tell our boys that they’re feminine in some way. Telling a girl that she’s masculine is not ideal, but it’s not as problematic.”

Insults tend to associate the target as a member of an out-group, and as Thomson-Bunn pointed out, the words that stick with children the most — jabs and jeers from classmates — contribute to negative female stereotypes, even if their target is a young boy.

“There tends to be a desire to divide clearly from women and girls and also typically to assert heterosexual normativity,” Thomson-Bunn said. “So insults tend to either be related to femininity or homosexuality. Those are the ways of delineating who is and who isn’t a man ‘of the right kind.’”

Even as adults, Penner said differing expectations about how men and women behave and interact with each other can lead to assumptions about how they might engage in conversation and affect the way their words are interpreted.

“We expect that boys are not going to be as conversant with their peers as girls are, that they’re going to be more active, that they do things alongside someone,” Penner said.

Robin Lakoff, a linguistics professor at the University of California, Berkeley, studies trends that contribute to these gender expectations. Nolan studied her work in one of Thompson-Bunn’s classes and remembers how Lakoff identified trends in language use among men and women that could pressure individuals to follow stereotypes.

“When [women] talk with each other, they tend to build each other up and focus on building their relationships,” Nolan said. “Whereas usually when men talk, it’s a lot of the time to give information.”

Students were quick to clarify, though, that even Lakoff wouldn’t presume that all men or all women adhere to these linguistic tendencies.

“I know some men who are a lot more detached and abrasive with their language,” junior English major Mary Elizabeth Salley said. “I know a lot of guys who are very emotional and softer with their language. So I think it’s really unfair to just go ahead and state that guys tend to be less emotional, tend to be more aggressive in language, because I don’t think that’s always true.”

"Why Isn't My Voice Valued in a Church I Love?" 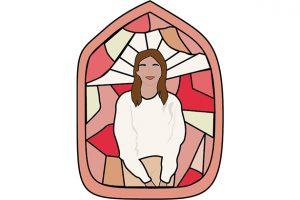 "Why Isn't My Voice Valued in a Church I Love?"

Art by Olivia Smith and Aliya EdwardsInside a small church in a foreign country, speaking a language unfamiliar to her own,...
Copyright 2013 Jupiter Premium Magazine Theme
Back to top