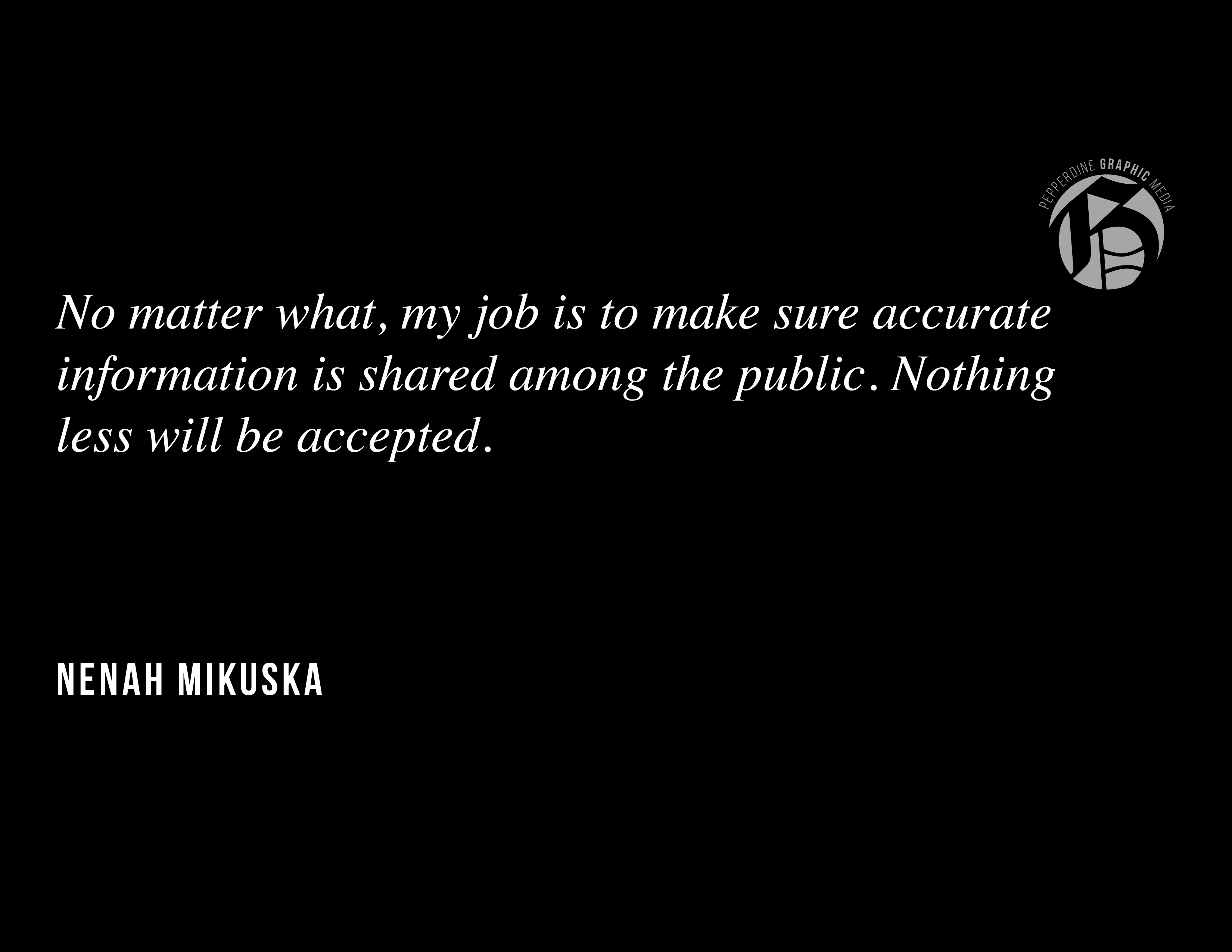 Full confession time: This was never part of the plan.

I never intended on being a journalist. My plan was to go to law school. I joined the Graphic in order to get some critical feedback on my writing and have experience writing and publishing my work.

I never thought I’d fall in love with journalism and pursue it as a career.

I recognized the need to bridge a gap between the media and their audiences. An aggressive Trump Administration and an internet full of misleading or false information continue to make finding the truth difficult. I saw the potential not only to make my own voice heard but to ensure that facts were available to all.

There is good in the world that must not go unnoticed. My desire to bring truthful, honest reporting to people is part of why I am a journalist and why I’ve stuck with it.

If you type in “Being a journalist in 2017” into a Google search engine, the first results are enough to send a pretty obvious message on the state of journalism and reporting.

The first one reads “Why new journalism grads are optimistic about 2017,” published on Jan. 3, 2017, by poynter.org. This article quotes many graduates, citing their excitement to contribute to the community and do good in the world.

The second article was from the indeed.com blog, titled “New Journalism Grads are Abandoning the Field,” and was published a mere eight months prior, on June 16, 2016. This one focuses on the decline within the field of journalism in terms of morale, the low salary rates and a common lack of job stability.

Nothing could better summarize the current state of journalism than these two headlines. Journalists are working hard, but the field has had its share of struggles With President Trump’s blatant war on mainstream media and his critics, along with the several scandals involving newscasters such as Matt Lauer and Charlie Rose, the atmosphere surrounding the media is incredibly negative.

Sometimes trusting the media is difficult. Partisan media, according to a Journalist’s Report summary, published Aug. 9 2016, does have a polarizing effect on viewers. Our media system is largely privatized and is largely looking for viewership, which may sensationalize news out of context.

There are flaws in the system. That’s something I as a journalist am fully willing to admit. But this is something I and my fellow colleagues are striving to improve.

Call me an optimist, but there are a few things I believe still hold true.

Americans do have the capacity to care about one another. Last year saw hurricanes destroy parts of the Southand Puerto Rico, and California was in a state of emergency due to massive outbreaks of wildfire. Despite the widespread loss, people came together during these difficult days to help rescue people and animals, donated money, time, food and clothing. They worked to be a support system for those in need.

Having faith in humanity is what drives me. There are people who do care about this country. Sometimes it’s hard to remember, yet they exist. Our generation has the capacity to fix many things. I write as a way to promote these positive changes and to encourage others to fight for them.

At the same time, I will not shy away from the hard truths that sometimes need addressing. There is a truth that remains absolute, and I am pursuing this career as a way to bring it forward.

The Society of Professional Journalist’s Code of Ethics states: “Ethical journalism should be accurate and fair … [Journalists should] take responsibility for the accuracy of their work.” These are the words that I and all of my colleagues have lived by since the beginning. No matter what, my job is to make sure accurate information is shared among the public. Nothing less will be accepted.

Americans want and deserve the truth. My job as a journalist is to deliver it.